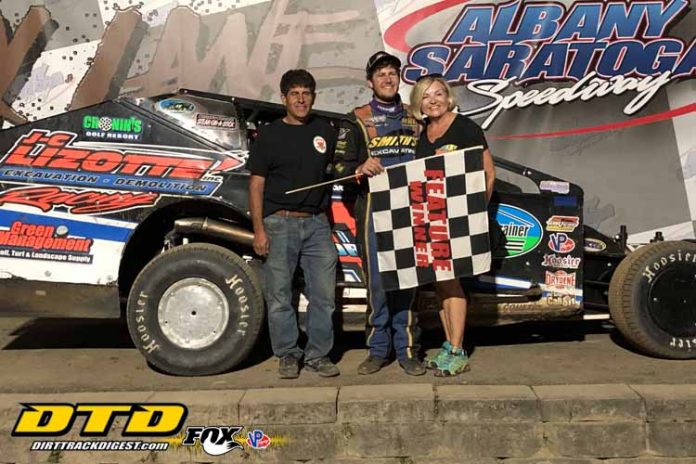 This past weekend local racing concentrated on Albany-Saratoga Speedway in Malta, N.Y., where they staged the first ever three-day show at the track in many years, Malta Massive Weekend began on Thursday with the multi-time postponed season opener from April.  It consisted of a 54-lap Modified event paying $5,400 to win and Anthony Perrego of Montgomery, N.Y., took home the money and his first time at the Malta oval.

Saturday the Super DIRTcar Series (SDS) came to town and one of its 2019 rookie drivers took home the $10,000 cash prize.  Demetrios Drellos of Queensbury, N.Y., drew the pole in the re-draw and beat Matt Sheppard to the green to take the lead.  That was the first thing that set the pace of the event.  Drellos led all of the 100 laps and navigated the lap traffic like a seasoned veteran that had been on the SDS for years even though it’s his rookie season on the traveling series that takes the best Modified drivers to tracks throughout the Northeast and Canada.  We spoke with Drellos before the event and he said he loved racing the SDS and had learned a lot running the different tracks.  It seems that one very important lesson he’s learned is patience.  On Saturday Demetrios was able to keep dirt tracks best Modified drivers behind him.  The nine drivers finishing behind him have a combined total of 100 wins this season, but nothing was stopping the young driver from taking his first SDS win and the special Malta Massive Weekend belt home on Saturday. In previous seasons Demetrios was a regular at Malta where he recorded his first win at the track in 2017.  In the few short years in a Modified Drellos has won at Lebanon Valley (2017) and at Fonda (2018) in the Nelson owned No. 85.  He will be driving the No. 85 at the Fonda 200 Weekend.

Before we entered the pits on Friday we stopped at the Demetrios Drellos apparel trailer and took notice of an unusual tee-shirt hanging on the wall.  Love him or hate him, he’ll sell you a shirt.  The idea is one that says a lot about the young driver and his sense of humor. If you’ve frequented local racing it’s a safe bet that Bob James of BOBCO Video has provided you with a DVD or even one of the old VHS tapes.  For over 25 years “BOBCO” as everyone calls him, has provided images of local racing to drivers, fans, sponsors and media.  Many may not know him to see him because he has spent much of his time on race nights on the roof of track towers working his masterful coverage.  Currently BOBCO is dealing with some serious health issues and this past Thursday at Albany Saratoga where he has spent many a night on the roof with his video camera in hand, the track and his driver, Kenny Martin, Jr., gave tribute to him by surprising him, on the front stretch, with a return of the, BOBCO owned, No. 93 Pro Stock; bringing it to the track to take the final starting position in the Pro Stock event that night. During his career, Krazy Kenny took BOBCO’s No. 93 to many wins at local tracks.  Kenny currently lives in Charlotte, N.C., and made the trip north with the car to surprise Bob on this special night.  In the flag stand was Kenny’s son, Sheldon Martin who also drove the car when he lived in the area.  The entire scene was so very moving you could feel the emotions coming from everyone involved and the crowd in the stands.  Kenny Martin, Jr., drove from his 20th starting position to fifth and when he was interviewed after the race said, “I’m not here to race, I’m here to beat cancer. This is what you do for a friend.”  The track also supported Bob with a racing memorabilia raffle that included race car panels, tee shirts, and die cast cars. While walking through the pits on Friday we ran across a familiar No. 39, a number we associated with Dickie Larkin.  On Friday it was being driven by Dickie’s son, Ryan Larkin in the Sportsman division.  Ryan stepped away from racing about nine years ago but on Friday was looking to try his hand on the wheel once again.  It seems that racing never leaves the blood. We all buy a 50/50 ticket now and then or maybe every time we go to a race so the people that sell them become familiar.  Natasha Marie is just one who has become one of our racing family.  Natasha has been going to the races since she was seven years old and began selling 50/50 tickets at 13.  Her family connection to racing comes from her great-grandfather, Kelton Bailey and great Uncle, Ernie Palmer at Lebanon Valley.  When she first started going to the races she saw the 50/50 girls and knew she wanted to do it someday.  She began in 1993 and only missed a short time after a car accident and after giving birth to her daughter, Natalie.  She’s been part of the 50/50 teams at Lebanon Valley, Albany Saratoga, Devil’s Bowl, Middletown, and Syracuse.  Natasha says selling 50/50 tickets took her out of her shell at a young age and has been a big part of her foundation; it’s taught her to treat everyone equally, not to judge, and always think outside the box and be kind.  She loves selling 50/50 tickets and considers the people she’s met to be part of her family, her racing family.

This Thursday begins the big event at Fonda that everyone has been anticipating all season.  The Fonda 200 Weekend returns with open practice and campers begin to converge on the Montgomery County Fairgrounds.  Grandstand admission is free on Thursday.

On Saturday of the Fonda 200 weekend, a drawing will be held amongst open-wheel competitors at Fonda Speedway with perfect attendance during the 2019 season. The winner takes home a brand-new Teo-Pro chassis outfitted with body mounts. Drivers must have attended every event, points or non-points, in their respective divisions to be eligible for the giveaway including the Fonda 200 weekend. Stay tuned next week for the winner.