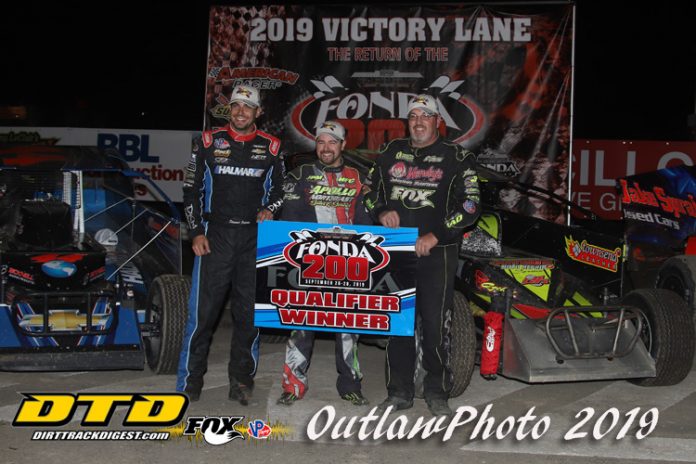 FONDA, NY – On a beautiful fall evening for racing, 119 cars signed in for competition in a five division racing program consisting of the Patriot Sprint cars, the Algonkin Motel Pro Stocks, the Trackside Body Works Street Stocks, and the Four Cylinder Cruisers. The Sunoco Racing Modifieds were also on hand for qualifying heat races for the prestigious $53,000 to win “Fonda 200”.

The all-important heat race events were also held for the Sunoco Modifieds with Stewart Friesen, Josh Hohenforst, and 2019 Track Champion Rocky Warner taking those victories. With those wins, those three drivers will start in the top three positions respectively in the $53,000 to win “Fonda 200 on Saturday! The top 10 drivers in each of the 15-lap Sunoco Modified heat races were locked into the “Fonda 200” with those results at the bottom of this release.

Opening ceremonies began with Ed Biittig Sr. who said to the crowd “Ladies and Gentleman this season at Fonda has been a very special one and has meant a lot to me. This past week on Wednesday I went to Pangburn Road in Duanesburg to visit Fonda Speedway legend Jack Johnson as a huge ovation came from the crowd. I told Jack what the Deyo’s were doing at Fonda and a smile came on his face.”


“Jack is still Jack and to look at his face you could see the wins he had at Fonda,” Biittig continued on to say. “Then I went into the museum tonight and looked at the cars and all of the wins that those drivers had here at Fonda and how special that was. Thank you to Brett & Heather Deyo and their staff for bringing the 200 back and enjoy your evening”.

The lead guitarist for Tomkins Drive, Cal LaClair, performed a guitar version of the National Anthem before the racing began. Tomkins Drive was also live in the Entertainment Building following the completion of the racing activities.

The first feature of the evening was the rain delayed Earl Halaquist Memorial event with Danny Varin leading from his pole position start after qualifying was completed back in May for the event. By lap eight Varin held a straightaway advantage over Josh Pieniazek who started fourth. Varin was in lap traffic at the halfway point in the event with the top five at that point consisting of Varin, Pieniazek, Jordan Poirier, Jeff Trombley, and Joe Trenka.

On lap 16, Poirier took the second position away from Pieniazek but the race took a turn for the worse at that point when Varin drove to the pit area relinquishing the lead to Poirier. Poirier stretched his advantage to a full straightaway by lap 22 and was in heavy lap traffic until the end of the event but took his first ever Patriot Sprint win and his first ever win in the Earl Halaquist event over Pieniazek, Jordan Thomas, Trombley, and Trenca.

“I didn’t even know that Danny (Varin) pulled in,” Poirier said in the Fuccillo Automotive Group Mike Cole Memorial victory lane. “I was trying to get through lap traffic and then I didn’t see him. I didn’t expect the cushion to be like that but the car was really good.”

Next up was the $1,000 to win Algonkin Motel Pro Stock feature with fourth place starter Jason Morrison leading lap one. Fifth place starter Nick Stone was in the second position in Bill Knapp’s #21 car and on lap two he got around the outside of Morrison for the lead in turns three and four.

Also on the move was 2019 track champion Luke Horning who started the event in the 11th position and by lap six he was going three wide to get around Jeff McPhail and Devon Camenga for the third position. Horning continued his march to the front on lap eight when he took the second position away from Morrison while Stone enjoyed a straightaway advantage over the field.

At the halfway point in the event Stone was the leader followed by Horning, Morrison, 14th place starter Kenny Gates, and Chuck Dumblewski. The only position that changed for the remainder of the event was the third and fourth positions which Gates and Dumblewski took away from Morrison in the final five laps of the event.

Stone went on to his fourth win of the 2019 season and the 46th of his career in the division over Horning, Gates, Dumblewski, and Morrison. The win was Stone’s fourth out of the last six races during the 2019 season!

“Fifth was definitely a good starting spot for me,” Stone said in victory lane. “The starter was showing me that I had a good lead so I just stayed cautious with the lap cars. Bill Knapp wanted me to run this car to try to figure some stuff out and the car is good.”

Roberts Towing & Recovery sponsored the $500 to win Trackside Body Works Street Stock feature with Ed Hatch leading the first two laps after starting on the pole position for the event. An early caution fell on lap three and on the restart Stephen Young took over the race lead but just as quickly as he took over the lead his car broke and he was forced to the pit area handing the lead back over to Hatch.

Zach Sorrentino started the event in the fifth position and on a lap four restart took over the race lead from Hatch. Michael Arnold put on a show coming to the front after having to pit on lap nine and restarting at the rear of the field. Arnold made it all the way back up to the third position behind Sorrentino and Hatch while John Devine and Mark Burch completed the top five at the checkered flag.

For Sorrentino it was his first win of the season and the third of his career in the division.
“I don’t know how to describe it,” Sorrentino told Mimi Lazzaro in victory lane. “We’ve won the last race of the season the last two years and it sucks to have to wait all season to get a win.”
2019 Four Cylinder Track Champion Ken Hollenbeck proved that it doesn’t matter where you start in the feature if you have a good car. Hollenbeck started the 12-lap Four Cylinder Cruiser feature in the ninth position while John Napoli started on the outside pole and led the first four laps of the event.

On a lap five restart, 12th place starter Riley Pedrick took over the race lead with Hollenbeck now up to the second position after making his way through the field. Hollenbeck took over the race lead on lap seven on the outside of turns three and four and went on to his eighth win of the season and the 50th of his career in the division over Brandon Ely, Pedrick, Dale VanAllen, and Napoli.

The final event of the evening was the 30-lap A-Main for the Patriot Sprint cars with Josh Pieniazek leading at the start. By lap seven Pieniazek was already in lap traffic with the red flag out for Matt Tanner who flipped his car in turn two while running fourth. Tanner was not injured in the wreck and on the restart Pieniazek continued to lead the event.

At the halfway point Pieniazek led and was followed by Mike Kiser, Jordan Thomas, Jonathan Preston, and Jordan Poirier. The red flag was out again on lap 16 for Davie Franek who went through the wooden fence and out on to the sidewalk along the road that runs along turns one and two of the speedway. Franek was also okay after the wreck with no injuries reported.

Pieniazek was never seriously challenged during the event despite a caution with only four laps remaining in the event as he went on to the win over Thomas, Poirier, Joe Trenka, and Paulie Colagiovanni.

“Fonda is my home track,” Pieniazek said in victory lane. “I was just trying to maintain my position to the finish. I wasn’t about to try going down low on the track, I wasn’t about to change what I was doing.”

The “Fonda 200” weekend concludes today with the running of the B-Mains for the Sunoco Modifieds, a complete racing program for the Swagger Factory Apparel Crate 602 Sportsman, and the 28th running of the “Fonda 200”, the first 200 lap event at Fonda since the last one was held 17 years ago which was won by Brett Hearn!