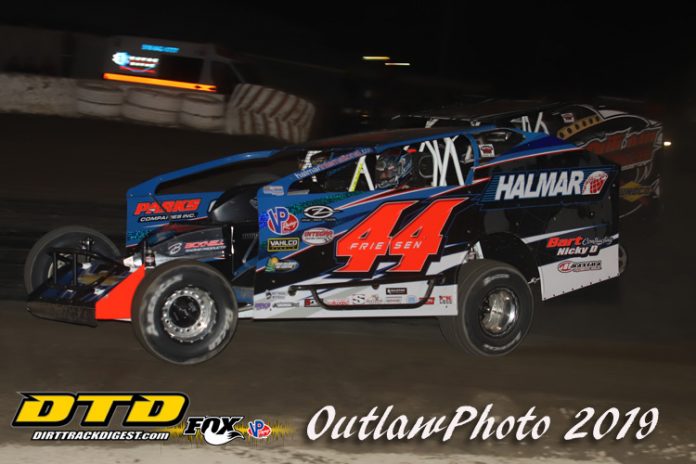 FONDA, NY – There aren’t many races left at the historic Fonda Speedway that Stewart Friesen hasn’t won yet. After Friday night’s qualifying rounds at the half-mile fairgrounds facility, he’s one step closer to crossing another one off on his proverbial bucket list; the Fonda 200.

With $53,000 up for grabs, it’s no surprise that the Canadian import would flex his muscles early during Friday night’s first modified qualifier. What is a surprise is how quickly he did so.

After a draw that left a lot to be desired, the driver of the Halmar sponsored No. 44 entry quickly moved from his 13th starting position to fifth in the running order within two circuits around the ‘Track of Champions’ leaving some to surmise that regardless of chassis manufacturer, Friesen could bring a cardboard box with wheels to the speedway and still rocket to the front of the field.

After a few late-race restarts that resulted in a spirited duel with four-time Fonda 200 winner Brett Hearn, the Sprakers, N.Y. resident drove to victory and the pole position for Saturday’s main event with David Schilling, Matt Sheppard and Dave Constantino rounding out the top-five.

“The car was really good on the bottom,” Friesen said after his qualifying event. “Some guys slipped up and I was able to fill some holes and get up through the pack quickly and then racing Brett [Hearn] hard for the lead at the end there was just wild.”

Though some would expect there to be a slight downturn in success after abruptly changing chassis manufacturers seemingly in midstride, Friesen’s program hasn’t missed a step and this fact has been rather apparent over the course of the last three race weekends.

“These guys have been working really hard getting these cars together,” Friesen continued. “We’re just a little bit tight right now and need to free the car up a touch but that was the best we could do tonight and we’ll start up front tomorrow so hopefully we’ll be able to set a good pace.”

With the stress of qualifying officially behind him, the focus now shifts to strategy as far as 200-laps around Fonda are concerned. In that respect, there are more unknowns than one would care to count as the difficulty of race planning begins to set in for the multi-time track champion.

“It’s a little easier knowing that we’re starting up front,” explained Friesen. “But it’s going to be tough watching the track conditions and deciding what tire compounds we’re going to need to run; that’s going to be a tough call. We’re just focused on getting to lap-100 and then adjusting as we need to after that. Basically, we’re just going to see what happens and go from there.”

The general consensus as far as tires go can be summed up in one simple word; options.

“We’re going to need to have options and a lot of them,” Friesen stated with a laugh. “You’re going to need a set of tires to get through the first 100-laps and then you also have to realize that this is going to be a night show so the track may not lay rubber down and be racy and if it does that, there’s going to be a lot of tired guys after the race tomorrow night. We just need to stay on top of the track, have good pace and adjust as the conditions change. It’s going to be a challenge.”

The last time a 200-lap modified feature was run at Fonda in 2002, Brett Hearn was the one to win it.

After Friday night, and by virtue of his second-place run behind Stewart Friesen in his qualifying event, he sits poised to do so for the fifth time in his storied career. There is one potentially tall hurdle that seems to be standing in his way; the driver of the Halmar No. 44.

“Honestly, the whole race on Saturday is about Stewart [Friesen],” Hearn stated on Friday night. “With how fast he is, here particularly, I mean I don’t know what we’ll have to do to beat him but 200-laps is a long race so we’ll have time to figure it out.”

With little to know information or history to fall back on as far as setup notes are concerned, most if not all of the modified drivers in attendance are seemingly in the dark. The driver of the infamous No. 20 might be so more than one would assume.

“We’re running a package that we’ve never run before,” explained Hearn. “So, for us to be that fast right off the hauler is a big deal. We’ll discuss some things tonight and try to make it a bit faster but overall, this is a good start to the weekend.”

It was more than just a ‘good’ start to the weekend as with two late-race restarts, Hearn was almost able to complete the pass on eventual race-winner Friesen which is something that almost never happens proving that the New Jersey native already has the pace needed to make a strong challenge when needed. Almost.

“We could get alongside him [Friesen] but he would get such a good run off the top and I was scrubbing off so much speed on the bottom of turn two and it made it hard to stay with him down the back straight. But there’s a lot of stress off knowing that we’re in the show and starting fourth tomorrow. We’ll fine-tune the car a little bit and see where how it goes but to be competitive like we are right now and to be starting up towards the front is cool. It really is.”