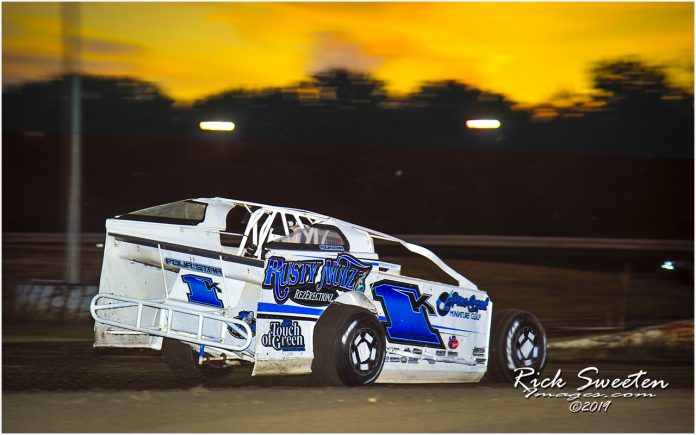 BRIDGEPORT, NJ – The Bridgeport Speedway opened its fourth annual King of the Big Block weekend with racing action on ‘Friday night sponsored by Joy Auto Parts for the Small Block Modifieds and the Sunbelt Rental Outlaw Stocks. There were also two timed hot lap sessions for the Spirit Auto Center Big Blocks and South Jersey Overhead Door 602 Crate Sportsman where the competitor with the fastest lap in each group would be awarded a redraw position for Saturday night action.

Rick Laubach came up with the pole. Laubach and Neal Williams made up the first row and led the field to the wave of the green flag. The caution waved quickly when Matt Stangle was unable to get his Ace Materials No. 6. Stangle headed to the pits and on the next attempt, several cars were involved in an incident on the home stretch that saw Craig VonDohren head to the pits with enough damage to Dick Biever’s No. 14s to eliminate him from the competition. The third time was the charm as Laubach led the way over Ryan Godown, Neal Williams, Ryan Krachun and Brett Kressley.

Billy Pauch, Jr. raced into fifth before lap five to trail Laubach, Godown, Williams and Krachun, While Pauch was on the move, Modified Rookie, Louden Reimert was making a lot of moves as he advanced with the Fleurer No. 16 as he raced up to seventh after starting in the seventh row.

With the top ten remaining unchanged through the halfway mark, Cale Ross, Reimert, ‘Ron Roberts, Jeff Strunk and Kressley had a race of their own as each driver tried to improve their position in the top ten.

Godown headed pitside with mechanical issues with the Searock No. 26 with seventeen laps complete. It was also at this juncture that race leader began to deal with lapped traffic but nothing seemed to slow Laubach and Ryan Kerr’s No. 1K.

With five to go, Laubach had a healthy lead over Williams, Krachun, Pauch Jr. and Cale Ross. Krachun and Pauch were battling for position in the closing laps. Williams slowed on the track as the white flag waved, ending his bid for a runner-up finish.

Laubach took the checkered flag, adding a Small Block Modified victory to his Big Block win earlier this season. Krachun won the battle with Pauch, Jr. who finished third in the Packenham No. 18. Ross finished fourth as Jeff Strunk took fifth after racing with Reimert on the final lap. Reimert finished six ahead of Duane Howard, Wade Hendrickson, Davey Sammons and Ron Roberts.

For the seventh time this season, Rich Stinson picked up the win in the Sunbelt Rental Outlaw Stock feature event. This race was a 2019 Poker Series race for the Outlaw Stocks. His win gave Stinson his third Ace which is going to be a tough had to beat.

Stinson led every one of the fifteen laps after starting on the pole. He was chased for most of the fifteen laps by Tom Wills,Sr. to returned to driving after nearly a four year absence. Wills, Sr. was behind the wheel of the Joslin No. 6. Wills, Jr. raced into third with just five laps to go and then spent the remaining laps challenging his father for second.

Stinson led the field to the checkered with Wills, Jr. getting by Wills, Sr on the final lap to take second. Brian Ludwig finished fourth with Lee Allen rounding out the top five.