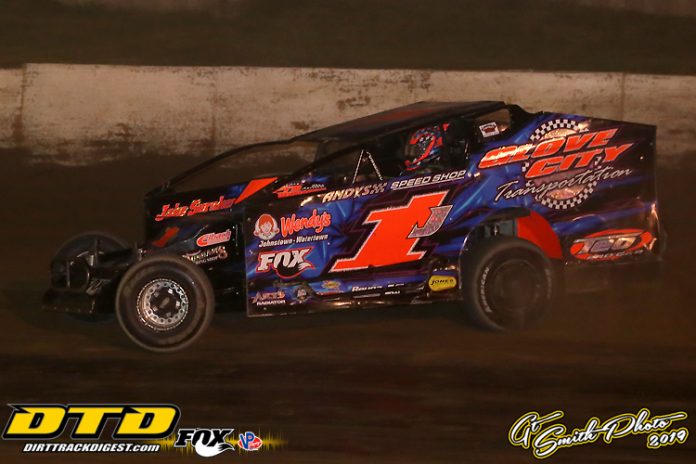 After winning five feature events on his way to the 2019 Fonda Speedway modified crown, one would assume that the ‘Flying Squirrel’ may have finally reached the proverbial glass ceiling of his season at the ‘Track of Champions.’

That assumption would be incorrect.

Earlier this year, the driver of the Jake Spraker owned No. 1J used a late-race restart to pass seven-time track champion Bobby Varin on his way to victory lane. Though the scenes may have changed since then, and the circumstances were slightly different, on Friday night the players were not.

After leading for roughly 14.5 laps, it seemed as if Varin was well on his way to locking up the third starting spot for Saturdays Fonda 200. Warner had other ideas.

With a last-lap, last-corner pass, Warner squeaked by the Palmer’s Service Center No. 76 and charged to Joe Kriss’ checkered flag over Bobby Varin, Demetrious Drellos, Tim Fuller and Anthony Perrego to round out the top-five.

For Warner – who has had an absolutely stellar season behind the wheel of a modified – he is one step closer to completing what many would consider a fairytale season. Call it luck, call it talent, call it divine appointment if one believes in such things but the simple truth of the matter is this; there are $53,000 reasons why Rocky Warner can’t be counted out on Saturday night.

“The car was better in our qualifying race tonight,” stated Warner after his win. “We were off a little bit in warmups earlier and we were off last week and I was really terribly thrilled with it but I think we’re close. It’s not perfect, we’re a little right-rear tight still and we have a few things to work out before the big race tomorrow but we’re definitely close.”

With the stress and pressure subsiding after making it into the Fonda 200 – with a third place starting position no less – the focus now returns to the all important and somewhat confusing question due to the limitless amount of unknowns that all competitors are facing heading into Saturday; what strategy is going to work out the best?

“I don’t really have a game plan to be honest,” Warner continued. “I have a lot of ideas and brainstorms and what ifs and what could we do or what should we do but I just think we just have to roll with it. We have the tire prep pretty close so hopefully we have the right deal with that going on and to be honest, I think it’s a guessing game and it’s the same thing for everybody. Hopefully we can be there at the end and be competitive and have a shot at the win.”

Open tire rules bring options and options – unfortunately at times – bring a multitude of choices. The difficult aspect is making the correct one. Therein lies the entirely new level of stress heading into Saturday night at the ‘Track of Champions.’

“We’re going to watch what happens in the first half and then make a decision for the second half,” explained Warner. “We have to see if the track rubbers up or if they’ll prep it a little at half time; there are a lot of big things that can play a factor and I don’t if anybody has the answers or not. There are a lot more questions than answers at this point so we’ll just have to see what happens.”

Though Warner is only in his second season of modified competition, he has the advantage of being a weekly regular at the fairgrounds oval. With this comes the added value of having both a notebook to look back upon and the understanding of the many phases of tire wear throughout the season. Limited as his experience may be, the value of it cannot be overlooked by any means.

“We’re confident but we’re always humble,” Warner concluded. “I always tell my guys that with racing we can be on top one day and at the bottom the next. We can’t take anything for granted and what we’ve done in the past, even this year, is in the past. We have experience here obviously but it’s a new day and a new weekend; hopefully we can have something for them tomorrow.”

It’s never a good day when you have to pull a valve cover.

After finishing second to Rocky Warner in his qualifier, unconfirmed reports state that Varin was reportedly down a cylinder or two in the closing laps on Friday night.

The crew was seen removing the valve cover from the right side of the engine post-race with the possibility of valve train issues being the cause of concern.