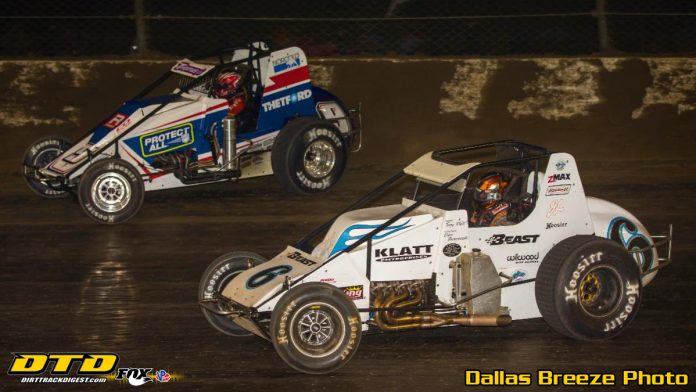 Bacon defied all notions of running “just good enough.” His intentions were fully set on winning and closing the curtain on a banner year for himself and the Klatt team by capturing his second series victory of the season, and his career, leading the final 10 laps to sweep both victories on half-mile dirt tracks (Eldora and Williams Grove) on the Silver Crown schedule in 2019.

“We kind of struggled and everything else, so it was good to get a win here and get an owner’s championship for these guys,” Bacon said. “They worked hard to make huge improvements over the last year and we won two races this year. We were in the hunt every time. I’m really happy for them, and hopefully, we can keep winning these races the next few years.”

The Broken Arrow, Okla. native started 4th in the 27-car field, the largest car count for a Silver Crown race at Eldora since 2008. However, pole winner Kevin Thomas, Jr., making his debut run in Chris Dyson Racing’s mount, emerged with the lead on a first lap that saw the top-three of Thomas, Kody Swanson and Bacon battle three-wide off turn four.

Thomas, a 2nd place finisher in the previous year’s 4-Crown Silver Crown feature, checked out in the early stages, building up a two second lead over Bacon and Swanson, who locked up an unprecedented fifth series driving title by starting the night’s main event.

The first incident of the night occurred in turn one the ninth lap when Steve Buckwalter climbed the outside wall, creating heavy damage to the right front. The trailing John Heydenreich had nowhere to roam and slid sideways into Buckwalter who was at rest up against the outside wall. Both drivers were okay, but their cars were finished for the remainder of the evening.

On the ensuing restart, the game changed as Bacon began working the middle and was able to remain within arm’s reach of Thomas. Just moments later, though, on lap 12, 6th running Jason McDougal looped his ride at the entrance of turn one. As McDougal sat helplessly in the middle of the racing surface, Midget and Sprint feature winner Tyler Courtney clobbered McDougal with his right rear wheel, seriously damaging both machines and ending both driver’s nights and Courtney’s bid for a USAC sweep at the 4-Crown.

With 13 laps remaining, Bacon tested the waters and slid through the middle to show a nose to the high-riding Thomas in turn one and then turn three as well. Bacon tried again two laps later in turn one, making up a bit of ground, but there wasn’t enough zip to make the slide stick.

Entering the final 10 laps, Thomas clung to a three-car length lead over Bacon, until scraping his right-side wheels off the outside wall between turns three and four. As Thomas fought to break free from the wall’s grasp, Bacon shot under and raced away scot-free with the lead and an eventual 1.931 second triumph over Thomas, Justin Grant, Swanson and Shane Cottle, who started all the way back in 24th.

For Thomas, it was another heartbreak for a driver who’s been on the cusp of a first USAC Silver Crown victory for two consecutive seasons now. In fact, his result on Saturday was the fifth 2nd place finish of his Silver Crown career, moving him into the distinction as the driver with the most runner-up finishes without a series win, passing Dave Blaney, Pablo Donoso and Arnie Knepper on the list.

“We had a good chance of winning the sprint car race too, plugged it in the fence and broke a front end,” Thomas recalled. “Luckily, we finished 4th there. And then we did it again. I don’t ever run the fence, so I’m actually glad that I was at least up there to plug it in the fence. It was a long day, but it was a fun day. I think we got a 5th, a 4th and a 2nd. For somebody who’s not very good here, I’ll take it.”