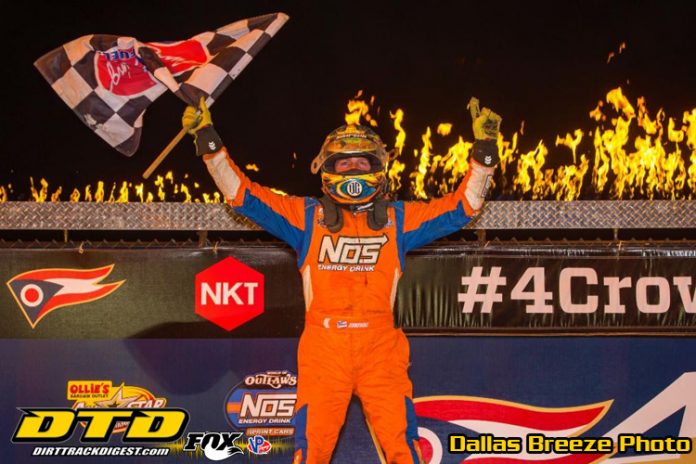 ROSSBURG, OH – Tyler Courtney had all the right moves in Saturday night’s 4-Crown Nationals presented by NKT.tv USAC NOS Energy Drink National Midget feature, but when you’re amidst a high-speed game of chess on the banks of Eldora Speedway, you’ve got to have all the right moves at just the right time.

That’s among the laundry list of accomplishments the Indianapolis, Ind. driver achieved in becoming just the third driver to repeat a 4-Crown Midget feature victory, joining Rich Vogler in 1985-86 and Kyle Larson in 2011-12.

Yet it took everything in his might to prevail for the second time in as many years after waging war in a lap-after-lap classic Eldora patented slider-fest involving Tanner Carrick and Logan Seavey.

Seavey, the defending series champ, jumped to the initial lead on the opening lap, sliding to the top of turn one past both pole sitter Jerry Coons, Jr. and outside front row starter Carrick. Carrick quickly took control by turns three and four with a slider past his Keith Kunz Motorsports/Curb-Agajanian teammate to take the lead.

The red flag came early in the 25-lap event, on lap five, when 12th running Jason McDougal walked away from a turn four flip.

When racing resumed, Seavey immediately went on the attack, sliding by Carrick. Carrick returned the favor on the other end, rinse and repeat, as the two teammates put on a spectacular show of who could make the other blink first.

Courtney cleared two-time 4-Crown Midget winner Rico Abreu for third on the seventh lap and closed in on the top two, riding the rim in formation behind Carrick and Seavey with two car lengths separating the freight train nearing the halfway point.

With 10 to go, Seavey made a breathtaking scoop to the bottom in turn three, climbing the stairs to the outside wall as he slid past Carrick, leading by a single car length at the line. Both Carrick and Courtney went double-barrel buckshot low into turn one nose to tail, sliding past Seavey, who countered underneath off turn two and drag raced Carrick into turn three, reclaiming the advantage.

Carrick went right back to the well and fired another shot on Seavey in turn three with eight to go, sliding by Seavey and drifting up, tapping the wall with his rear bumper as Seavey ducked under off turn four to narrowly nip Carrick at the line by a bumper.

Heading into one on the 19th lap side-by-side, Carrick clamped down on Seavey, driving to the middle on entry while Seavey went even lower. Both drifted high to the outside wall in turn two, but Carrick surged ahead to the lead the fight into turn three where Courtney split both Carrick and Seavey, threading the needle between turns three and four.

Seavey muscled his way back ahead of Courtney for second as the front runners worked their way by the lapped car of Andrew Layser. Courtney chose the low line under Layser on the back straightaway as Seavey’s momentum was briefly stifled. Seavey came back at Courtney, both drifting wheel-to-wheel to the concrete with Courtney kissing the wall with his right rear tire and launching around the outside to secure second with now just five laps remaining.

On laps 22 and 23, Courtney went into action, slide jobbing Carrick into turn one. But, each time, Carrick had an answer, driving downhill off the second turn to beat Courtney into turn three to claw his way back into the lead.

However, coming to the white flag, Courtney went after Carrick once more in turn one, successfully pulling off the slider. Carrick drove low off two to pull even with Courtney midway down the back straightaway. Courtney used the lapped car of Karsyn Elledge as a sort of pick, closing up the alleyway that Carrick would’ve aimed for into turn three.
Courtney distanced himself just enough on the final circuit, disallowing any chance of one final haymaker from Carrick into turn three to score his seventh series feature victory of the season and the 12th of his career over Carrick, Seavey, Rico Abreu and Kevin Thomas, Jr.

“I just tried to time my moves right, but Tanner kept coming back,” Courtney explained. “He’s turning into one heck of a driver. That one was a lot harder than I was hoping for, but this is Eldora and that’s what this place is all about.”

For Carrick, it was a story of “what could’ve been” after leading a race-high 20 laps.

“I ran that whole race as hard as I could,” Carrick said. “It’s just kind of a bummer. I got into lapped traffic there and Tyler squeezed me down into a lapped car and I lost all my momentum and my shot at getting back around him. There weren’t enough laps to get my speed back up and going. This is a big momentum place, and once you’re out front, you just keep going and you’re good. It kind of sucks. I led a lot of laps there and came out with a second. Maybe next year.”

**Jason McDougal flipped on lap 5 of the feature.