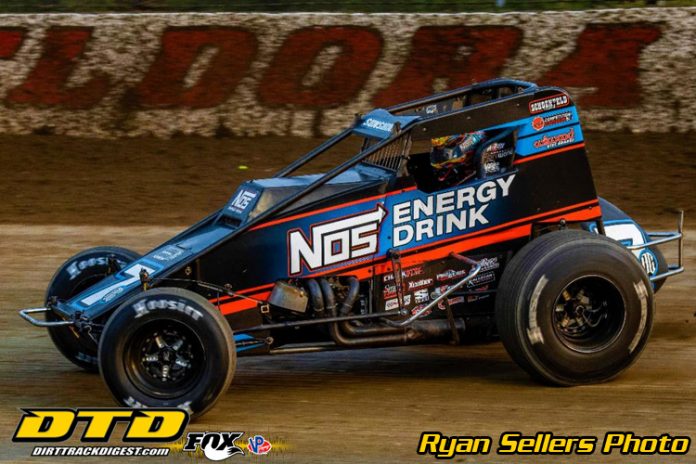 However, Courtney, the reigning series champ, can now claim the record as his own after winning his seventh series main event of the year, three of which have come at the famed half-mile, with Saturday’s being the 24th of his career, moving him past A.J. Foyt and Roger McCluskey on the all-time list and into a tie for 22nd with Chris Windom.

“When you have guys like Jack Hewitt and Rich Vogler and all those guys that have ran here, for someone to never do four consecutive USAC National Sprint Car wins in a row here, is incredible,” Courtney exclaimed. “To just even be compared to and having the opportunity to go for four in a row is pretty incredible. But now we get to put our name in the history books and hopefully come back in the spring for five in a row.”

Just as he did in the midget throughout the night, Courtney was the rabbit everyone was chasing in his Clauson-Marshall-Newman Racing/NOS Energy Drink – Competition Suspension, Inc./Spike/Rider Chevy-powered sprinter. But he had to do a little chasing himself early on as Kevin Thomas, Jr. shot out to the lead from his pole starting position.

Sixth starting Courtney, meanwhile, was a rocket on the second lap as he exploded past Brady Bacon, Justin Grant and C.J. Leary on the back straightaway to move from 5th to 2nd before banging his right rear tire off the wall between turns there and four and settling into place in third behind leader Thomas and second-running Leary.

On lap six, Courtney gave it another shot, sliding past Leary in turn three to secure the 2nd position, and now had sights set on tracking down Thomas 1.6 seconds in the distance, which he had whittled down to just a tick over a half second by the tenth lap as they both rode the rail up against the outside wall.

Nearing the halfway point, traffic came into play and Thomas was determined to be the aggressor. Not wanting to play it safe and cautious, Thomas split hairs and threaded needles through the backend of the field as he sought his very own first career win at Eldora.

With 12 laps remaining, Thomas bounced the right rear off the outside wall between turns three and four, which sucked his right front wheel into the concrete at the exit of four, thus breaking the front end as a result. Thomas was now a sitting duck in the lead, and less than a lap later, Courtney made him pay, driving by Thomas on the bottom of three to grab the spot and construct an ever-growing lead.

With 10 to go, fourth-running Leary slid by third-running Thomas utilizing the bottom of turn one. As he drifted up in turn two, a surging Chris Windom had momentum up top, driving off turn two as both he and Leary clipped wheels, sending Leary spinning backwards into the outside wall leading with the left rear. Leary was unable to restart, sending the series point leader to a 22nd place result, only his second finish outside the top-ten in 28 starts this season.

Courtney broke out to a half-straightaway lead in the final stages and appeared primed for his second victory of the night despite a particularly hairy moment that caught his attention. Exiting turn two with two laps to go, Courtney hit the right rear against the wall, getting his right front airborne and glancing off the concrete before continuing on without too much of a hindrance to speak of. No harm, no foul as they say.

The final lap was as clean as a whistle for Courtney as he raced to a 1.424 second victory over Windom, Grant, Thomas and Bacon to extend his series-leading win total to seven.