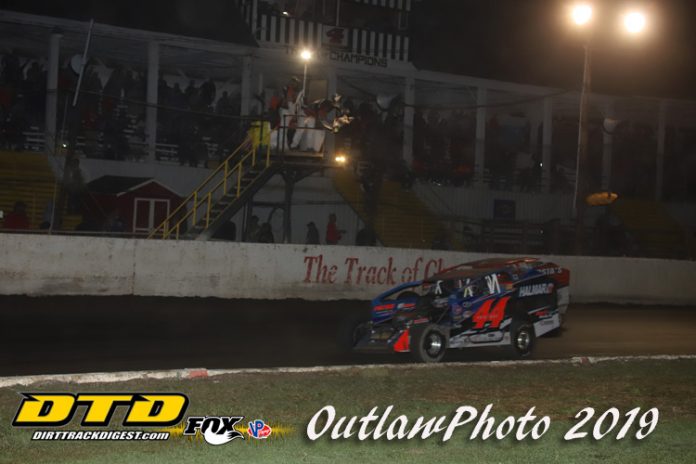 The word dominance is often overused in the realm of American sports.

Where Stewart Friesen is concerned, however, those three syllables may in fact be a gross understatement. In short – where Fonda Speedway is concerned at least – this is Friesen’s world and we’re just living in it.

On Friday night after the first modified qualifier for the 2019 edition of the Fonda 200, Brett Hearn stated that the race on Saturday would be all about the driver of the Halmar owned No. 44 entry; it wouldn’t necessarily be a quest to outlast the field per se, it would instead be about deciphering a way to conquer only one man.

It turns out Hearn’s flattering observation was precise.

From the drop of the initial green flag on Saturday night, Friesen set the pace with seemingly little to no effort and would maintain the top spot through the first 74 circuits around the famed fairgrounds oval. Then the rains came.

With tire wear becoming an increasingly looming concern for the front runners – especially with right-rear tires failing faster than a late 1920s economy starting at lap-57 – the strategy that the HFR team may have had in mind from the onset of the evening immediately went out the window.

Strategy didn’t seem to matter in any case anyway.

After taking new tires prior to the race resuming and giving up track position in the process, Friesen only needed 30-laps to make his way back to the point after driving by then race-leader Matt DeLorenzo on lap-106.

Aside from a few challenges faced by then second-place running Matt Sheppard – who was disqualified at the scales at the end of the event – Friesen’s biggest competition was, for all intents and purposes, the lapped traffic he faced in the latter stages of the event.

Though the Canadian import has been well known for bringing his proverbial ‘A game’ to Fonda since he became a regular weekly competitor less than a decade ago, it’s rather safe to assume that after leading 168 out of 200-laps, he brought his ‘A+ game’ on Saturday.

After a 17-year absence from the ‘Track of Champions,’ Stewart Friesen brought the Fonda 200 back into the spotlight as he crossed the line under the double-checkers of Joe Kriss. 2019 Fonda Speedway Modified track champion Rocky Warner was second followed by Mike Mahaney, Billy Decker and Brett Hearn to round out the top-five.

Friesen has often won races by doing what none of his competitors are capable of. Saturday night was more of the same. Where his contemporaries seemed to thrive on the bottom of the speedway surface and on the top in equal measure, Friesen was able to drive through the middle with seemingly little to no issue and roll the bottom when it was necessary and hang it all out on the top when it was warranted. Basically, wherever he put his Billy the Kid powered Bicknell chassis, it would do what he asked of it.

“I don’t know what to tell you really,” said an elated Friesen in victory lane. “The middle felt good for us. There was a lot of grip there and we could just drive the car. I thought I screwed up towards the end there when I gave Sheppard the bottom but then we trucked around him on the top in turns three and four; it was weird the way the lane changed throughout the night but what a 200. It was awesome.”

With a commanding lead and a ride that undoubtedly maneuvered around the speedway in clean air or in traffic with seamless ease, the last thing that he wanted to see was a string of late-race cautions. In the words of Mick Jagger, you can’t always get what you want.

“Those late-race cautions definitely added some stress and some pressure,” Friesen continued. “The restarts were tough but it kept me out of lapped traffic a little bit but when I got to lapped traffic, they were all over the place; I didn’t know where to go really.”

As with any long-distance race, traffic is certainly going to come into play especially in the latter stages. Saturday night was no different by any means and even with the most dominant car on the speedway surface, victory lane was far from being an easily attained goal even with only a handful of circuits remaining.

“We got two to go and then the white and I just wanted to park it [the car] on the bottom,” He explained. “I figured he [Sheppard] was probably right back to me but it was enough to hold on. It was just a wild night for sure with the rain delay and not really knowing how 200-laps would play out but we were able to hold on and get it done.”

Race strategy and tire wear had been the talk of the weekend heading into the main event on Saturday night. What many weren’t factoring into the equation was the chance of precipitation during the 200-lap contest. It may not have been a wrench in the proverbial wheel by any stretch but it was at the very least a baseball card in the spokes for certain.

“The rain was a curveball but our right rear tire was pretty worn at lap-74,” said Friesen. “We met as a team in the hauler and we decided to short pit and not have to race all the way back up through like we would have if we went all the way to lap-100. That helped and we were able to restart in 6th there in the second half and it was good and I could work the middle. The car was just perfect.”

After watching tire failure after tire failure from lap-57 until the rain delay at lap-74, there were questions of whether or not the right rear tires would be able to go 100-laps straight in the second half. Then there’s Stewart Friesen who decided that his would be able to go 126-circuits. Call it faith or sheer willpower, but he made it happen.

“The only concern I had with pushing my tires that far was on a restart in the closing laps,” Friesen stated. “Rocky [Warner] gave me a shot to get me going and Matt [Sheppard] and I touched all at the same time and I went ‘oh shoot, I hope I didn’t get a beadlock stuck in the sidewall,’ obviously he just missed because he chewed up the rub rail but that was the only real scare with tires. I figured it would be pretty good and the thing was just stuck like glue from lap-one to lap-200; it was just an awesome handling racecar.”

Aside from tires being a possible cause for concern, there were other questions with no answers that were looming under the hood of the No.44. With an engine that was possibly laying down on Friday night, and after going through the entire car from the radiator fan to the rear-end cover before Saturday night, the potential problem had yet to be found nor was it solved making the aspect of 200-laps with another added unknown rather daunting.

“Yeah, you could say that the unresolved engine issues were a little bit of a concern,” laughed Friesen. “I don’t know if we have an exhaust leak or if we have a hockey card or something in the spokes but we went through the motor today, re-siliconed the headers and we still have no idea; it’s not in the driveline anywhere so I’m just going to say it was a Wayne Gretzky card in the driveshaft for 200-laps I guess.”

Friesen has won some of the biggest dirt races the region – and at times the country – has to offer. With Super DIRT Week victories at both the Mile in Syracuse and Oswego, not to mention Eldora and the Eastern States 200 at Middletown as well, it would seem difficult to place is latest accomplishment in the rankings of favorite victories. Then again, maybe not.

“This is right up there in the top-five for my career,” He stated. “This is big you know? It’s just so surreal and I don’t think it’s hit me yet. Winning tonight is just a testament to a great race team with a lot of great guys that believe in me and are willing to bust their butts for this team. This isn’t a stand-alone deal and these guys that are with me are the reason we’re here right now.”

Though the crew undoubtedly deserves a lot of the credit – and rightfully so – car owner Chris Larsen is on par in the appreciation department both on the business side of the HFR team and the personal relationship with his star driver.

“Chris Larsen gives us all the tools to get the job done,” Friesen concluded. “He believes in us and let us make the change to go to Bicknell and that was big. He has the confidence in us to make big decisions – sometimes stupid ones – but he always let’s me run with it. It’s not just the racing aspect either; I’ve learned so much from him outside of racing and the relationship we’ve built over the past four seasons is awesome. I know how much he loves to win big races like this and tonight, we did our job and got it done.”