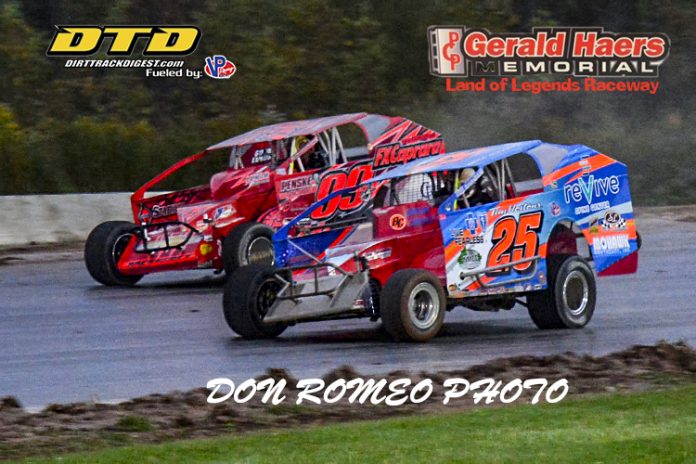 CANANDAIGUA, NY – With anticipation of the mega-dollar DIRTcar ‘Build Your Bank Challenge’ presented by Phelps Cement Products and Canandaigua Chrysler-Dodge-Jeep-Ram reaching a crescendo during the final weekend of September, in truly fitting fashion encore performances by weekly Saturday night stars Erick Rudolph and Kevin Root brought down the curtain on the 2019 season at Land Of Legends Raceway.

It only took an extra day as promoter Paul Cole’s second special of the month was extended to Sunday for the second time as rain once again soaked the Ontario County Fairgrounds oval midway through the fast-paced race program.

The wait hardly mattered as third-generation wheelman Rudolph relished the $6,000 lion’s share of the $50,000+ purse including special awards posted for the mighty DIRTcar Modifieds while Root pocketed a $2,000 top prize in the DIRTcar Sportsman Series fall event that boasted a total payout of nearly $10,000 in cash and contingencies. Lap leader and special bonuses further bolstered each winner’s take, with no less than 20 Modified drivers collecting at least $1,000 in the record-breaking scheduled single-day short-track extravaganza paying tribute to life-long motorsports supporter Gerald Haers.

A true racing patriarch, long-time mentor and supporter of Land of Legends, Vietnam War Veteran, as well as husband, father, grandfather and friend to so many more, Jerry Haers passed away at age 74 on July 15 this past summer. In a special pre-race ceremony conducted on Saturday evening, drivers gathered around the Haers family on the homestretch to honor his lifetime of contributions made to the racing community.

“Glad they didn’t make this (trophy) a couple inches taller, then it would be taller than me,” smiled Rudolph, 27, following his fifth victory of the season scored on the ultra-smooth half-miler. “I only had a few conversations with Mr. Haers during my time here, but being around this weekend its not hard to feel the impact of what he’s meant to everyone at the track. He was a fixture at Canandaigua back when my father (Charlie) raced and certainly respected by all those he continued to help out.”

The first lap caution resulted when open-wheel veteran Pat Ward caught the left-rear wheel of Gary Tomkins between turns three and four. Ninth-place starter Ward’s red #42P machine hit the inside berm then bounced back across the track in front of the remainder of the 26-car field. The mounts of Lance Dusett, Jimmy Phelps and Billy VanPelt sat parked in turn four when the dust cleared, reluctantly earning Phelps the Bicknell Racing Products $200 ‘Hard Luck’ Award without completing a single lap.

Back under green with Rudolph and Wight out front, only two more yellow flags slowed the action, with traffic remaining a constant over the final 40 laps of non-stop action as the surface grew slicker. Ward slowed for a second time on lap eight while Chad Brachmann looped his no. 3 BRP ride rounding turn one on lap 10 to bunch the field one last time.

At the midway mark Rudolph and Wight maintained their advantage with sentimental favorite Justin Haers (son of Jerry), Canadian small-block standout Gary Lindberg and consolation round winner Mat Williamson comprising the front-five. Continuing to weave his way in traffic as the scoreboard counted down, Williamson grabbed fourth on lap 32 and cracked the top-three with 10 more still to go.

Yet up ahead the leaders refused to lose ground and at the checkers it was Rudolph pulling away for a 10 car-length victory over Wight, followed by Cost Plus Processing LLC Hard Charger Williamson, top Champion/SuperGen Products Small-Block bonus award winner Lindberg and Haers ahead of all-time track feature winner Alan Johnson.

“This car has always been good to us, went away from it about a month ago and we thought we’d bring it back out and it provided for us tonight,” remarked ’18 LOLR points champion Rudolph, now with nine career wins at the fairgrounds; eight behind his father’s career total of 17 logged in the 1980s. “The track was right to our liking, took a little bit of rubber at the end but the car was really good all night. It was super maneuverable all the way around.”

“The track was definitely far different from yesterday. You had two sides of the spectrum, yesterday was really fast and today pretty slow. But both days we were good, our team’s just firing on all cylinders now,” added Rudolph, who headed home to Ransomville with more than $7,000 after leading the most laps including lap 25 which carried a $100 halfway bonus from Traction Grabber By Doc.

“Just needed a little bit more drive off the corners, think we were a little better in the middle but exiting the turns Erick could just pick up the throttle quicker and a lot harder,” commented Wight, who won an Empire Super Sprint A-Main at LOLR in 2017. “And the straightaways here are so long, everything I gained in the corners I’d lose half a car down the straightaway.”

“This was a great race put together by the Haers family in such a short time. Have to thank them for everything they’ve done for us racers. I’ve grown up with the family since I was little running around the track. I know how tough it is to run a family business (Phelps Cement Products) and stay so involved in racing. Hats off to them, it was a great event to support,” Wight added.

Improving from 19th to cross the line third in the 28-minute Modified main, Williamson echoed Wight’s remarks as his no. 88 Buzz Chew Chevrolet-North Country Market/Bicknell entry gained the most ground over the final circuits.

“The track was excellent and we had a really good show, just a great tribute to Jerry Haers,” noted Williamson from St. Catharines, Ont., currently one of the hottest drivers on both the DIRTcar Northeast Big-Block and Small-Block championship trails. “He was a big reason why I came.”

“Unfortunately, the pill draw (to determine heat start) hurt us yesterday and put us behind the 8-ball a little bit. Just needed some luck in the heat race, think we had a good enough car to make it into the re-draw (for feature start) but we put it behind us and focused on tonight and here we are,” Williamson said.

While Rudolph led all but one time around in the Modified nightcap, Root needed nearly all 40 laps to stave off invader Matt Janczuk and successfully defend hometurf. And after clinching his first-ever points title at LOLR four weeks earlier, the Geneva pilot held on to put an exclamation point on the ’19 Canandaigua campaign with his fourth win of the season scored over a stellar 46-car Canandaigua Chrysler-Dodge-Jeep-Ram Sportsman field.

“We had an amazing car but tonight isn’t about me, its about one guy who touched my life when I was growing up,” noted Root, 41, after parking his #34 F.X. Caprara Car Co.-Slack Karts-SJP/Bicknell car in the wine country winner’s circle for the sixth time in his career. “I’m great friends with the Haers family, have been for years, and this one’s for Jerry.”

After winning the fourth of five qualifying heats on Saturday, Root drew nine out of a possible 10 top starting positions available to begin inside row five on Sunday. Making his second-ever appearance at the fairgrounds, Janczuk led off from the pole before Canandaigua kingpin Kane Bristol took control on lap four.

Local driver A.J. Lloyd stopped on the back chute on lap five and the next time around Tyler Corcoran looped low in turn one to require a pair of yellow flags. Janczuk regained the lead on the ensuing lap six restart with Root bolting into third right behind.

Root moved into second with 10 laps scored and when Janczuk slid over the edge exiting turn two the defending Mr. DIRTcar titlist filled the gap low to assume the lead role. Traffic thickened as the laps clicked off and at the midway point Root, Janczuk and Bristol led the way chased by track regulars Garrison Krentz and Paul Guererri.

When Matt Guererri slowed in turn two for the third caution, Janczuk took advantage of Root’s miscue and pulled ahead as the leaders crossed the stripe.

“Guess I screwed up, didn’t think we were going green … didn’t hear anything, didn’t see the lights go out and my 1-way (radio) was all messed up … then (Janczuk) took off and I thought oh sh–, you know what I mean,” bellowed Root, explaining Janczuk’s third move to the front. “We had a good car, didn’t want to lose it.”

“After that I said you better get your stuff together, you’ve got the best car here. Get your composure, hit your marks and don’t over-drive it. Obviously lapped traffic played a key part, fans had to love this, it was an amazing race,” Root said.

Root battled back, inching closer using the low lane while Janczuk managed to keep momentum up high as the dirt duo ran side-by-side with 10 laps to go. Root edged past under the scoring tower on lap 32 yet Janczuk dug deep to return the favor the next lap. Root took over the point with one final surge in traffic, authoring the last lead change on lap 37 and building a six-car advantage under the checkers with one lapped car caught in between.

“This is a big race, a big win, wanted to start out the fall series good and this is just unbelievable,” beamed Root, who earned a $250 bonus from Finger Lakes Livestock Exchange for leading lap 20 as well as a guaranteed starting spot in the ‘Chevrolet Performance 75’ title event during Super DIRT Week staged at Oswego Speedway in October.

“These guys are just so tough, such a competitive class. On any given day we have 15 cars that can win a race here. I’m just fortunate to be the one tonight to come out on top. Its great to have a solid support team behind me and back up what we did last year,” Root added.

The final event to officially close out the 56th season takes place after the new year arrives when King’s Party House, 4031 Routes 5&20 in Canandaigua, hosts the Land Of Legends Raceway Awards Banquet. Circle Sat., Jan. 11, 2020 on the calendar as Promoter Paul Cole will hand out nearly $40,000 in cash and contingencies to his supporting race teams. Banquet tickets will go on sale in the weeks ahead with additional information publicized as more details are confirmed for this festive occasion.

Be sure to check out the final point standings for each division as well as all the track news online by visiting www.LandOfLegendsRaceway.com. Advance sale tickets will be made available online for the 2020 race season during the coming months. Once the schedule is posted, log into (LandOfLegendsRaceway.com), hit the red “Buy Tickets” button on the homepage, then make a selection from the list of dates & events highlighted.