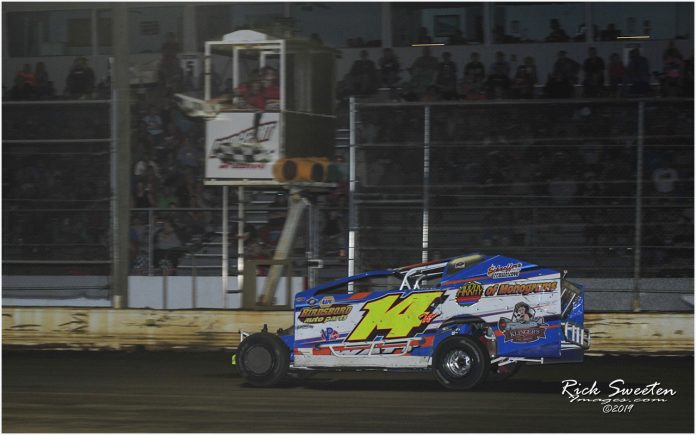 BRIDGEPORT, NJ – For the third consecutive year, Ryan Watt was crowned as the King of the Big Blocks at the Bridgeport Speedway. Billy Pauch picked up the win in the inaugural event but it has been Watt’s title ever since. The 2019 event, sponsored by Spirit Auto Center, will mark the final King of the Big Block event on the 5/8th mile track as plans continue for a whole new format for the 2020 season.

Four qualifying heats were used to determine the starting line-up for the fifty lap King of the Big Block main event. The top three of each heat earned redraw positions along with Craig VonDohren and Wade Hendrickson who were the fast timers in Friday night’s time hot lap sessions. Billy Pauch drew the pole and would lead the field to the start.

Brett Kressley lined up along side of Pauch as they led the way to the wave of Kenny Golden’s green flag. Twenty-six cars started the race for the title and there was plenty of three wide racing as drivers jockeyed for position in the early going.

Kressley came away with the lead followed by Pauch, Watt and Craig VonDohren. Watt closed in on Pauch and took over second as the two drivers raced to complete lap two. Kressley had pulled away from the field but once in second, Watt began to cut in to Kressley’s lead before the caution waved on lap eight when Stan Frankenfield came to a stop on the track.

Watt lined up to the outside of Kressley on the restart but several caution flags negated any efforts to challenge for the lead. Kressley led Watt, VonDohren, Pauch and Hendrickson through lap ten.

Kressley was the race leader through lap thirteen when Watt completed the pass for the lead. VonDohren took over second on lap fifteen with Kressley, Pauch and Hendrickson trailing the leaders.

Hendrickson took over fourth on lap seventeen. Rick Laubach, Billy Pauch Jr. who had advanced from his seventeenth place start, and Brandon Grosso raced for position just behind the top five as Watt led the way through lap twenty.

During a caution just before halfway, VonDohren headed pit side with a tire issue, moving Kressley alongside of Watt on the restart. Watt elected the outside on the restart and pulled ahead of Kressley as they raced through turns one and two.

The running order remained unchanged until the field had ten laps remaining. Hendrickson fell off the pace with mechanical issues after running in the top five throughout the race. Laubach moved into the top five.

Just before the five to go sign, Danny Bouc moved the C&S Equipment No. 6 into fourth. All eyes were on the Biever No. 14s as VonDohren raced from the rear of the field to sixth. VonDohren picked off positions to move up to third when the caution waved with three to go.

That called for a three lap shootout as Watt, Pauch, VonDohren, Bouc and Laubach lined up nose to tail for the green.

Watt raced to the checkered flag for his fifrh Bridgeport win of the season and his third King of the Big Block victory while Pauch and VonDohren raced for second. VonDohren took the spot at the line, taking second followed by Pauch, Bouc and Laubach. Strunk finished sixth with Tommy Beamer, who started the event as a provisional in twenty-fifth spot, finishing seventh. Jimmy Horton, Brandon Grosso and Dillon Steuer rounding out the top ten.

The race was first stopped for a violent racing accident that saw Sammy Martz, Jr. fly into the homestretch wall backward just before the turn one pit gate. Martz exited the wreck but was then transported to the hospital where he was released on Sunday, While the safety crew attended to Martz, the sky began to light up with lightning and several lights in turn two went out. Then the rain came and the track was forced to cancel the remaining laps of the feature event.

This race will be continued during the Wild Card weekend in November. Wayne Weaver was the raced leader followed by Jesse Hill, Jim Gallagher, Jr., Tom Sherby and 2019 Track Champion, Matt Peck.