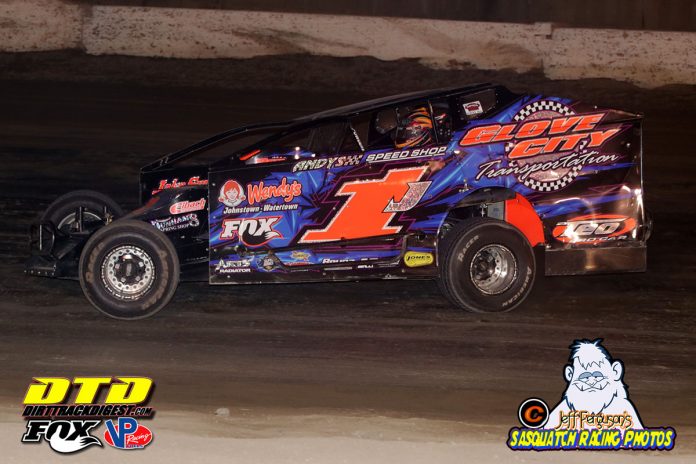 Sometimes it’s far more advantageous to be lucky rather than good.

Then again, on the rarest of occasions, the two aforementioned traits coincide in a manner that results in an outcome that is both unexpected and expected at the same time.

Rocky Warner has been the man to beat throughout nearly the entirety of the 2019 campaign at the Fonda Speedway. With five feature victories and a track title to show for his efforts, his experience and knowledge where finding the fastest way around the half-mile oval is concerned ranks amongst the best in the business.

Where the Fonda 200 was concerned, however, knowledge and experience were both lacking in equal measure.

After winning the third and final qualifying event for the biggest race in the history of the famed ‘Track of Champions,’ the stress level on the shoulders of the Gloversville, N.Y., native remained the same.

With tear wear, race strategy and a holy host of other items of concern rolling like a freight train, Warner was left to brainstorm and attempt something he has never attempted before in his already future hall of fame career. It was the equivalent of being a rookie all over again.

Yet with the same tenacity and patience – along with a small amount of luck on Saturday night – Warner was able to parlay his third-place starting position into a second-place finish behind Stewart Friesen. It was the season-ending run a driver could only hope for and the pilot of the Jake Spraker owned No. 1J had $20,000 reasons to smile at its conclusion.

Though the game plan that was established appeared to be simple – maintain track position and keep pace with the leaders in the first half of the 200-lap contest – Mother Nature decided to put a dent in everyone’s plans just prior to the 100-lap break. For Warner, decisions that had potentially far-reaching effects needed to be made.

“We came in and it was rubbered up pretty good at the end of that 74-lap run,” Warner said Saturday night. “I didn’t know if our tire would make it the rest of the way but we went back out with a bald right-rear anyway and I think we all did. A bunch of guys pitted early and I didn’t think it was a good idea. I’m not a pro at this and a lot of these guys are so lesson learned I guess.”

Though the decision to keep track position and stick to his proverbial guns may have left him in a slight deficit when racing resumed after the fuel stop at halfway, the ‘Flying Squirrel’ had both ample talent and speed in spades to race his Teo chassis back into contention and the top-five with just over 60-circuits remaining.

“We came back out and drove back towards the front and to end up in the top-three at the end is a pretty good accomplishment,” continued Warner. “Jake and Nancy [Spraker] give me the best equipment they can and my guys earned this result tonight. Obviously, you want to win, but being second behind Stewie [Friesen] is an awesome feeling for everyone involved and a pretty big deal.”

Tire options for the latter half of the event would play a pivotal role in the outcome of Saturday’s feature go. That fact was well-established from the onset of the weekend on Thursday night during practice. Instead of over-thinking and possibly throwing his race to the wind, Warner opted to stick with what he knew rather than tread blindingly into the unknown.

“We stuck with the same hard compound tires that we started with,” He explained. “I thought it was going to bite us in the butt there given how fast the track was and then it rubbered up and locked down so it ended up being the right choice in the end. We didn’t overthink it and try to outsmart ourselves at the halfway break; we just adjusted some shock pressures and changed some tires. That was it.”

With less than 50-laps remaining, Warner was undoubtedly the fastest car on the track according to the stop watch. Picking off cars and reeling in the front-runners of Friesen and Sheppard handily gave one the impression that the newly-minted title holder may have had more in the bag than many would have assumed from the onset of the feature. Truthfully, he did. Then the string of late-race cautions came.

“I just didn’t have enough gear in the car,” stated Warner. “I couldn’t fire on the restarts like I needed to and it took me so long to get wound up but once I did, I was pretty good but those guys were gapping me so much on the restarts that I just couldn’t hang with them. I was flawless in one and two but I was off in three and four. I just couldn’t get a good combination at both ends of the speedway but like I said, I’m pretty ecstatic to be here with a second-place finish.”

Ecstatic isn’t even the word truthfully. When the checkered flag fell late Saturday night, Warner found himself sandwiched between the racing talents of Stewart Friesen and Mike Mahaney – both of whom have pretty decent experience in long-distance races – and ahead of Billy Decker and Brett Hearn who have career statistics that speak for themselves.

“It’s been an absolutely outstanding year,” concluded Warner. “Pretty much everywhere we’ve gone, we’ve been right there battling every week. We’re just happy to be here and to be doing what we’re doing. Now it’s time to set our sights on Fulton for their 200 next weekend.”