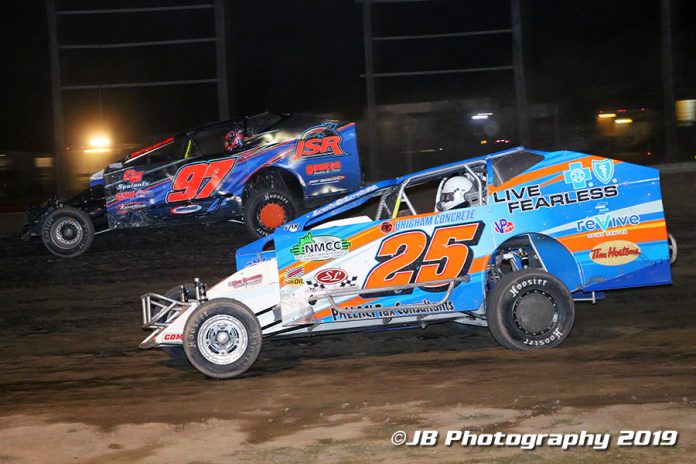 VERNON, NY – Utica-Rome Speedway is set to get the party started for Racing’s Biggest Party Super DIRT Week XLVIII on Tuesday night, October 8.  The DIRTcar 358-Modified Series will go 100-laps with $4,000 on the line while the DIRTcar Sportsman will go 40-laps with the winner pocketing $1,000.  The night’s racing program is presented by Clinton Tractor.

The biggest question coming into Tuesday night’s event for the DIRTcar 358-Modified Series is can anyone stop Erick Rudolph at Utica-Rome.  Rudolph has dominated Utica-Rome this season winning six races en route to his first ever speedway title.  No other driver has scored multiple victories.

Coming into the event, Rudolph also leads the chase for the 2019 DIRTcar 358-Modified Series title by 35 points over Dave Marcuccilli.  He has two wins on the series as well.

Billy Dunn ended the season second in the points at Utica-Rome with one win at the half-mile facility while in defense of his 2018 track title.  Pat Ward, Lance Willix and Billy Whittaker rounded out the top five while failing to make it to victory lane in 2019.

Other’s expected to in attendance on Tuesday night are Corey Wheeler who is currently third in the point standings.  Mike Mahaney and Tim Fuller are both former regulars at Utica-Rome Speedway who are fourth and fifth in small-block series points respectively.  Other potential entries include Jordan McCreadie, Mat Williamson, Kyle Dingwall, Michael Parent and Ryan Arbuthont as they complete the top 10 in the series championship chase.

Like Rudolph, Matt Janczuk dominated the DIRTcar Sportsman division at Utica-Rome.  He had four wins on the season while finishing in the top 10 in every event run for the division at the track.  He comes into this event chasing Kevin Root in DIRTcar Championship points.  Shane Pecore is second with Janczuk third.  Brad Rouse and Jackson Gill complete the top five.

Clinton Tractor has been a family owned and operated business for the last 66 years. Their motto has been to make sure your construction and agricultural equipment needs are met with little to no down time! With the family’s history in providing and maintaining one of the largest parts inventories in the area, it is no wonder they are considered the “Leader in Service”.

Sales/Services your Business provides: Local New Holland construction and agricultural outdoor power products. Not to mention they have some of the best trained service technicians in the industry. Clinton Tractor also has the ability to offer on and off-road tire service!

The grandstands admission price for this event is $25 with seniors/military members/students costing $22. Children under 16 are just $5. Pit prices for the event are $30 for DIRTcar Members and $35 for non-members. Pit gates will open at 4 p.m. while spectator gates open at 5 p.m. Racing starts at 7 p.m.