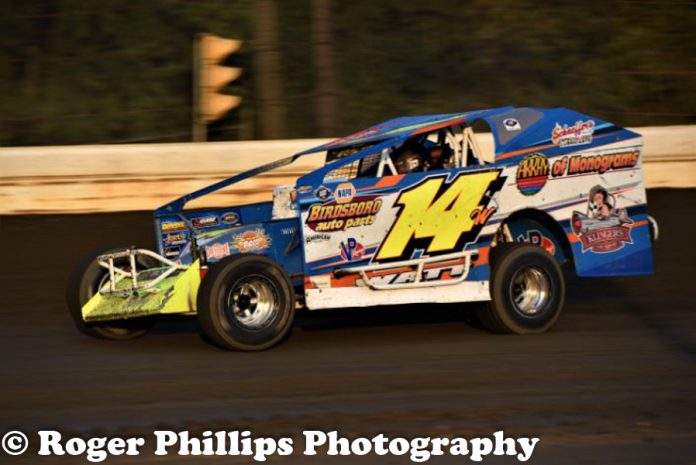 Ryan Watt might not have won the year long battle at Bridgeport Speedway, but the Boyertown, Pa., driver once showed last night why he is the King of the South Jersey five-eighth’s mile dirt oval. For the third consecutive year the driver simply known as the “Electric Company” dominated the competition en route to the big $10,000 first place prize driving the Roberts Racing No. 14W.

“This feels really good to get three in a row here in this race,” cited an obviously jubilant Watt while celebrating with his crew back at the team’s hauler. “The first King of the Big Block race we were out early when we broke a shock and we didn’t get to finish that race.  We had a helluva year that year going into it, so to win the last three, especially the last one on the five-eight’s track is pretty special. Next year the track is going to a three-eights or a half-mile so we really wanted to win this race here tonight.”

Starting the race in the fourth position, Watt was on the move early as blasted by the Bridgeport Speedway track champion Billy Pauch Sr., to take away second on lap two immediately setting his focus on early leader Brett Kressley. A rash of early race caution flags slowed the action with Kressley and Watt battling each other hard on each restart. Kressley preferred the inside line on the restarts and was able to hold off the hard charging Watt each time. However, a lap 13 restart found Watt getting the outside bite he needed as he was able to stay even with Kressley at the drop of the green and was able to power around him going into turn one to take the lead.

“On the previous restarts, before I took the lead, he (Kressley) was starting the race early I thought before the restart zone. Not too bad but a little early,” said Watt as he explained his pass for the lead. “He would pick up the pace, then slow down so I wasn’t sure what he was doing.  On the one restart I decided to just go for it and it worked out. My original plan was to let Kressley lead and I was going to push him to use up his tires, but I figured if I got out front I could back my pace down and save my tires for the end. I really tried to pace myself, not slide the car and keep the car straight.”

Watt went on to praise the track crew for the excellent job they did preparing the race track for the extra distance race.

“The track crew did an excellent job with the track tonight. We went with a 48 (tire hardness) tonight and we had plenty of tire left. I mean the tire looks beautiful, no blisters. All year in a 25-lap race we would blister tires, but that’s because we were always starting in the back. Where we started tonight definitely helped and the car was good all night.”

Battling the fierce competition along with the track in an extra distance race can be difficult enough, but Watt had a little something extra to deal with as he raced to the big win.

“Most time you don’t want to see caution at the end of these races when you are leading, but tonight I didn’t mind them,” commented Watt.  “I had the bolts come loose that hold the steering wheel together. I first noticed it on lap 15 so every caution I would try and tighten them up the best I could. I have a pad over the bolts and during the cautions I would take the pad off and the one time one of the bolts had come all the way out and I was able to put it back in. I tried to tighten them with hook on my arm restraint, but that didn’t work. They were pretty loose.  Luckily it stated together.”

Winning any race three times in a row is difficult.  Winning the race three consecutive years using the same car and chassis is almost unheard of in this day and age of big time Modified racing. There have been teams who have saved cars for certain races at certain tracks but that was mostly when Modifieds raced at the now defunct Syracuse Mile. Nowadays, teams use a car one or two years then either sell it or discard it. The car Watt won with on Saturday (aka Stitch) has been around for three years now and has raced at multiple tracks with much success.

“This car has won a lot of races,” mentioned Watt. “This is the first Bicknell car I’ve driven since I ran for Fran Purcell. When I started with Ronnie (Roberts) and Fay (Lancaster) we had some Teo’s then we switched to Troyer’s and when I had my own personal stuff we had Olsen’s and Teo’s. Like I said, when we ran for Fran (Purcell) we ran Bicknell’s and I liked them back then. This car was fast right out of the box and we’ve won a bunch of races with it. I was going to get rid of it over the winter, but when they (Bridgeport) decided they were going to stick with the five-eight’s track, we figured the car is so good there that we’ll just keep on running it. We’ve run it here and at all the Deyo races.  I know we’ve won a lot of money with it. I think tonight was the 23rd win for this car.”

Along with the $10,000 first place prize, this win also provides what the Robert’s Racing team was looking for going into a huge month of racing.  This is confidence. It hasn’t been the year team was hoping for due to a variety or reasons, but winning this race should provide the team a boost as they start to prepare the No, 14W for Super DIRT Week in two weeks.

“Winning tonight does help with our confidence, we’ve all been so frustrated lately with what was going on with our small block,” explained Watt. “We couldn’t figure out what was going on.  We were fast but it just wouldn’t stay running. We’ve changed everything on that car except for the motor itself and we finally changed that this morning. Grandview (Speedway) let us take it over there earlier today to let take a couple of laps and it worked great so I guess that was the issue.

“This year has been a different year for us altogether. Last year we won I think 11 races and this year we’ve only won six, seven counting tonight. The schedule here (Bridgeport) was different and with the rainouts we just haven’t gone to as many races this year. Bridgeport was off pretty much the whole month of August and instead of going racing somewhere else we ended up taking Logan racing, went on vacation and doing some different family stuff. I looked on the sheet and last year when we won this race we had nine wins so we’re only two behind so that ain’t terrible.”