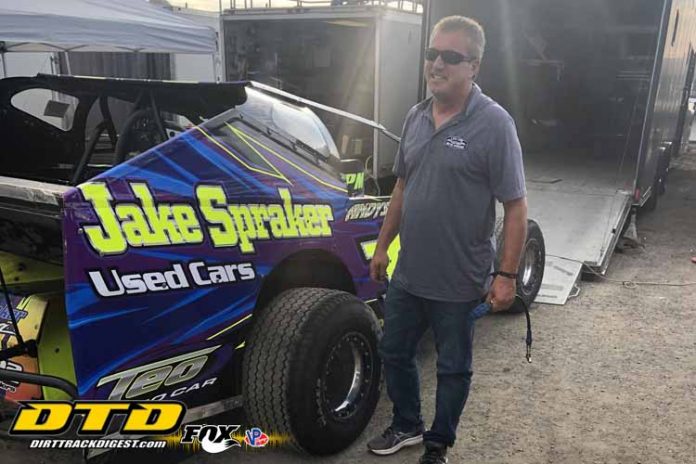 This past weekend finalized the 2019 season at Fonda Speedway and it was done in a fashion that will be talked about throughout the off season.  Not even a two-hour rain delay could dampen the biggest paying event in the track’s history, the $53,000 to win Fonda 200 for Stewart Friesen of Sprakers who stood in victory lane with the trophy and the big check at the end of the event.  Friesen was joined by second place, Rocky Warner of Gloversville, the 2019 Modified Track Champion, as he took home $20,000 and track invader, Mike Mahaney of Elizabethtown, N.Y., took home $10,000.  Tim Hartman, Jr., of Niskayuna, 2019 602 Sportsman Track Champion, took home $1,500 for his win in the 602 Sportsman event. On Friday night of the two-day weekend the rain postponed Earl Halaquist Memorial event from May, was run for the Patriot Sprints and the winner was Jordan Poirier of Canada.  He was followed by Josh Pieniazek of Altamont.  Pieniazek topped off the night at his home track by winning the 30-lap sprint event later in the night.  The event was red flagged on lap 16 when Davie Franek went through the wooden fence in turn one and landed on the sidewalk in front of the track along Route 30.  He was taken to the hospital after the crash where he spent the night and was released the next day and sent home to recover. Nick Stone of Pattersonville won the $1,000 Pro Stock feature, Zach Sorrentino of Massachusetts was the winner of the $500 to win Street Stock event.  2019 Four Cylinder Track Champion, Kenny Hollenbeck, of Sloansville, won the Four Cylinder Cruiser event, a record for the division.  It was Hollenbeck’s 50th win at Fonda.  He and his brother, Kerrie sit one and two on the division all time win list. As we walked through the Sprint pit area early in the night we ran across Link Pettit who usually runs his 305 sprinter with the CRSA but this night he came to try it out with the 360 sprints of the Patriot Sprint Tour.  He said he didn’t expect to do much because he was running a 305 but Pettit has racing in his blood (his father, Link Sr., is in the NYSSCA Hall of Fame) and Pettit just likes to compete when he can. Pitting next to Pettit was the Warren Alexson owned sprinter driven by someone very familiar to Fonda, Jeff Trombley.  With Trombley was another familiar face from the past, Kevin Priest, former IMCA competitor at Fonda.  Priest said he hasn’t raced in over 15 years but would love to try his hand at a sprinter.

Jack Miller was also in the pits with his Sportsman car and said he hadn’t raced at Fonda since the 1990’s but wanted to shake down a new car and this seemed to be a good opportunity.  He won the consi. Miller’s record at Fonda dates back to the 1970’s when he was Limited Sportsman Champion in 1973.  He also had six Late Model wins at Fonda.  He’s now a regular at Utica-Rome where he has three wins and was 1998 Sportsman Champion at the Vernon oval. Sportsman driver, Michael McCallion has been a regular in the division at Fonda for the past two years.  He got the racing bug from his father, Joe who we remember racing at Fonda during the 1990’s.  Joe ran the No. 200 Sportsman and brought Harold “Digger” Lappeus of Sharon Springs with him each week, the driver of the original No. 200 at Fonda in the 1950’s.  Lappeus owned the funeral home in Sharon Springs and that’s how he got his nickname.  Michael is an ambitious young man, he had his own lawn service business at 13.  He just graduated from high school and currently works as a certified welder for Verizon in Albany. We also ran into two Fonda legends, Tommy Spencer and Johnny Kollar.  On Saturday they both had a car in the Sportsman field for the $1,500 to win event.  Spencer had originally promised his backup car to Mike Ketchum and when his regular driver, Chad Edwards wrecked his car the week before, Spencer didn’t think it would be right to take the car away from Ketchum after he worked on it all week, so Kollar stepped in to give Edwards a ride in his No. 10%.  Ketchum ran fifth and sixth throughout most of the Sportsman event, but dropped back to 10th in the final laps.  The overall winner in this deal was Edwards who finished in the runner up spot in the Kollar No. 10%.

Former Fonda regular, Tim Clemons was visiting from North Carolina and got behind the wheel of the backup Spraker No. 1j.  Clemons was happy that he was able to make the Fonda 200 field and said that although the cars look much the same as they did, they are very different now.  Tim Clemons was a three time Sportsman champion at Fonda, 1990, 91 and 92. The racing community joined Bob James (BOBCO Video) in his fight against cancer with monetary support and many prayers this past weekend at Fonda.  After warmups many drivers went through the grandstands for a helmets drive collecting donations.   Hondo Classic organizer, Kelley Keefe was selling all former classic tee shirts for $5.00 each with all proceeds going to BOBCO.  When we spoke to her she had already collected $500.

The Fonda 50/50 sellers outdid themselves for Fonda 200 weekend and the winners took home $3,134 on Friday night and $6,071 on Saturday.  Pretty safe to say that’s a record for Fonda Speedway.

As we close we want to thank JoJo and George, Stewart’s number one fans, for our beautiful angel music box.  You are truly two special people.

Our next racing will be at SDW in Oswego.  See you there.  Until next time please send all news and/or comments to biittig@yahoo.com