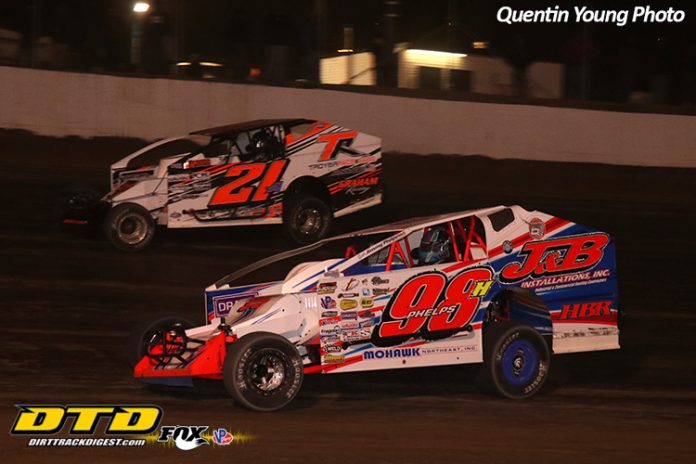 As we get ready to head to the track, Dirt Track Digest offers a look at the event, the history, format, purse and schedule while also offering predictions as to how the 2019 edition will turn out.

–  Four 15 lap optional qualifying races will be run with the line-ups determined by draw.

– Heat draw will be held in the grandstand at 1:30pm to determine heat line-ups.

– Heats are 10 laps each. Between 30 to 36 cars will transfer to the main depending on the number of heats.

– Consolations are 12 laps each. A total eight to 12 or more cars will transfer depending on the number of consolation events.

– Heat winners (and pre-announced additional finishers up to 12 total drivers) will re-draw for their feature starting position on the track or in the pit area after the heat races.

– The feature is 200 laps with up to three caution laps per caution counting toward the total.

– There will be a 15 minute break at halfway.

– The race could go past lap 200 as it must finish under a green-white-checkered scenario.

Billy Decker: Billy Decker is a four-time winner of the Outlaw 200.  The Unadilla, N.Y., driver is also a multi-time winner with the Super DIRTcar Series at Fulton Speedway.  When the big money is on the line Decker finds a way to the front at Fulton.  Last season Decker finished 43rd.  He is a strong bet to rebound Saturday night to claim his first big win of 2019.

Stewart Friesen: Friesen comes into the Outlaw 200 hot after an impressive showing last weekend at the Fonda Speedway.  Thanks to that impressive effort, Friesen is $53,000 richer.  The format was similar in that there was a midway break in the race.  Friesen overcame that and challenges from Matt Sheppard.  He was fourth last year and it wouldn’t be a stretch to see him improve a few spots Saturday night while on his way to winning $20,000.

Jimmy Phelps: Phelps will tell you that he hasn’t been happy with the team’s results in 2019.  They’ve struggled at times finding speed.  One quick way to remedy that is to come home.  Phelps is a former track champion and a three-time winner of the Outlaw 200.  He won the race in 2018 and no one would be surprised to see him go back-to-back.

Mike Mahaney: Mahaney finished 10th in last season’s Outlaw 200.  The previous two Outlaw 200’s saw the King Ferry, N.Y., star finish second in the race.  He’s been close.  He’s coming off a podium finish last weekend at Fonda Speedway, so like Friesen, maybe he rides the hot hand into a career defining win in the Outlaw 200.

Erick Rudolph: Erick Rudolph was second in last year’s race and nearly had a Fulton Speedway win earlier in the year in DIRTcar 358-Modified Series action.  He was hot mid-summer before cooling off a bit in August.  Last weekend he got a much needed win in the Gerald Haers Memorial at the Land of Legends Raceway.  Confidence is key and maybe that propels him to an Outlaw 200 win.

Larry Wight: In scanning the list of winners of the Outlaw 200, how is it still possible that Wight hasn’t found victory lane in the event?  He’s finished third three times in his career and was 25th last year.   He’s had a dominant car during the regular season at the high-banks and this just might be the year he gets it done.

Mat Williamson: Williamson hasn’t had the best of luck in the Outlaw 200 with his best finish in recent memory a ninth.  He does have a win at the Fulton Speedway this year and he was the winner of $100,000 at the Orange County Fair Speedway.  He’s been good as of late winning a pair of Super DIRTcar Series events as well.  He can’t be counted out in the final rundown.

Peter Britten: Britten has led the Outlaw 200 during his career and he’s won the 358-Modified portion at Super DIRT Week.  He has big race pedigree.  It wouldn’t be too much of a stretch to see him win at Fulton.  He’s had some struggles as of late.  A Saturday night win would be a much needed pick me up.

Chris Hile: Hile has been in the top 10 in the Outlaw 200 on several occasions.  He was fourth back in 2016. The last time his No. 5H took to the track he finished second to Williamson in the ‘Duel at the Demon’ Super DIRTcar Series event at Brewerton Speedway.  He’s due to win a big race.  Could Saturday be the day?

Tim Sears Jr.:  Sears has had a lot of tough luck this year.  He lost both the Brewerton and Fulton titles on the final night of action.  I think an Outlaw 200 win would more than make up for that.  He’s good at Fulton so it doesn’t take much imagination to believe he could pull it off.  He was fifth in the 2018 edition.