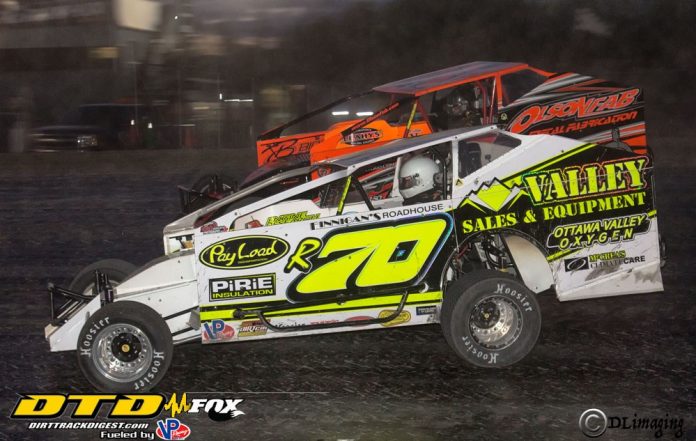 It can be said that the Brewerton Speedway’s Hurricane 100 is one of those races that has become an icon in racing. This 27th addition of this race will once again draw the best in DIRTcar racing to challenge for the DIRTcar 358-Modified Series prize. Drivers from both Canada and the United States will dual for this win on Thursday, October 10.

In the past 27 years, some of the biggest names in racing have visited victory lane at the Hurricane 100, and this year’s race is shaping up to be better than ever.

Local drivers like Ryan Arbuthnot, who has won both the Can-Am and Brockville Speedway championships, is looking forward to challenging for this prize.

“The Hurricane is a really good benchmark for where you are at with your program,” said Arbuthnot.  “It’s a tough track and the best will be there. This one race can really show how you stack up against the rest.” Cornwall Motor Speedway champion Corey Wheeler will also be challenging for the win on Thursday night.

“At Super DIRT Week we are looking to remain with the season plan of being constant,” mentioned Wheeler.  “Hopefully staying out of trouble on the track, but the one race everyone strives for is the Hurricane 100 at Brewerton.”

The Canadians are set to challenge the likes of Billy Decker and last year’s winner, Larry Wight, to win the 27th Hurricane 100. They will also be going up against David Marcuccilli, a rising star in the 358 division.  He knows this track well and went to victory lane the last two seasons at the Hurricane 50 in the Sportsman division. “I’ve been lucky enough to win the Sportsman portion of this event the last two years so it would be huge to win the 358 portion this year and keep us in the points hunt,” explained Marcuccilli.

The 27th running of the Hurricane 100 is to be one of those races as in past years that gets remembered and talked about long after the race is done.

Also on the card, that night will be the DIRTcar Sportsman Series Hurricane 30. The very best Sportsman Modified drivers will all challenge for the win. Like its bigger brother, the Hurricane 30 has grown in stature and is well sought after as a crown.

Mark your calendars for Thursday, October 10, as the 27th Annual Hurricane 100 is a race to remember.