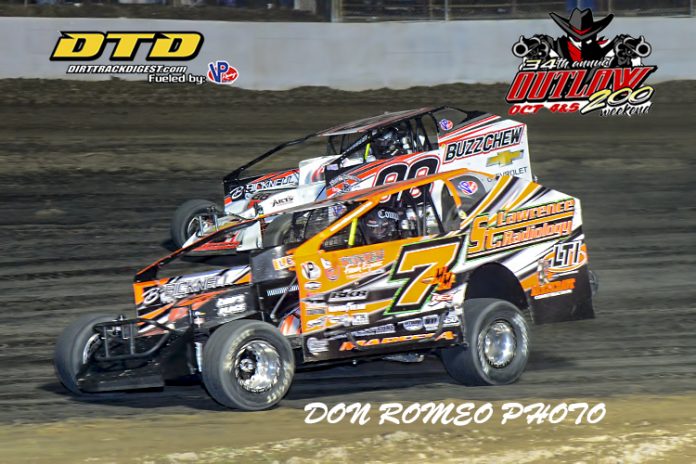 There is a belief in racing that sometimes you have to lose a big race before you can win one.

Mike Maresca lost the Race for the Cure 150 at the Cornwall Motor Speedway back in August to teammate Tim Fuller on the final lap. He was disheartened after the loss, but it made him stronger. That loss taught him something. Saturday night those lessons played out with a win in the prestigious Outlaw 200 at the Fulton Speedway which also came with a $20,000 paycheck.

“We’ve been digging away at it,” commented Maresca. “I think some of the earlier losses that I had in big races got me to where I need to be to win this race as far as making the moves and everything. It came down to the bottom at the end there.

“I just hit my marks. Obviously, at Cornwall I made a little bobble. I kept my head a little bit better this time. I lost my mind when I won; that is insane. So many have gotten away from me. To win it is pretty cool. I’m pumped.”

Maresca was still in near shock as he stood in victory lane after the event covered in Champagne. He never expected to win the Outlaw 200, which he did in impressive fashion. He started the fifth, ran in the top five for much of the race before passing Matt Sheppard for the lead on lap 120.

“This is probably the biggest race of the year for Modifieds as far as a diverse field,” cited Maresca. “Obviously Super DIRT Week pays a little more money, but I think with all the drivers that come from all over and the weekly Fulton guys who are bad fast. This, in my opinion, is the hardest race to win with the draw and how tricky the track is. I can’t believe I just won this race. I’m not supposed to win this race. I’m just a local 358 racer from Potsdam, N.Y. This is insane.”

Maresca was challenged late in the go with a caution on lap 189 as Billy Shantel pinballed off the backstretch wall after help from another competitor. The caution gave Mat Williamson and Tim Sears Jr., one final shot at Maresca. He was flawless. He kept his No. 7 Bicknell glued to the bottom of the speedway. He was going to make anyone that wanted the lead go around him on the outside.

“I knew to get to the bottom seeing that I was running it before,” commented Maresca. “I knew I had to run my car around there and keep it straight. No one was going to go around me if I stayed on the bottom. They might show a nose or something, but I had a better chance than if I rolled the middle.”

Even though it was only moments after winning the biggest race of his career, Maresca kept his wits about him. He was excited no doubt, but he was quick to point out that it was time to move to the next race. He was already looking ahead to this week’s events at Oswego Speedway as part of Super DIRT Week.

“I’m just going keep doing my thing,” said Maresca. “I’m just going to keep having fun racing. I’m not going to let this change the way we do things. We laugh, we have a good time and we race hard. We live for racing. It’s on the to the next one. DIRT Week is in two days. I’m excited now, but at the same time its time to get this thing home, wash it up and get it ready for Oswego.”