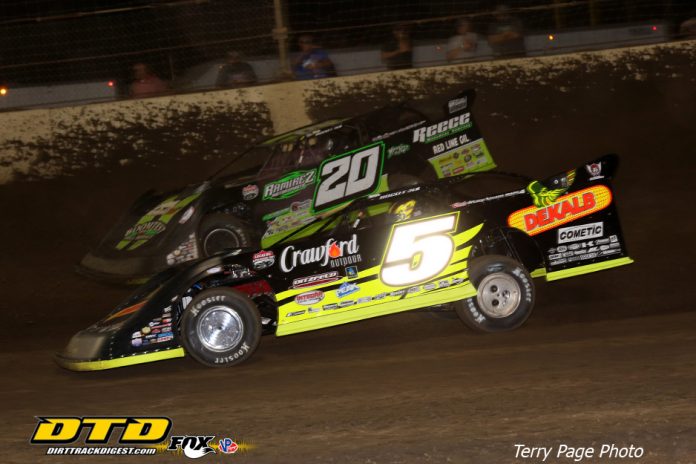 IMPERIAL, PA – Don O’Neal won his second Pittsburgher 100 in the last three years on Saturday Night at Pittsburgh’s Pennsylvania Motor Speedway. In taking home the $20,000 first place prize, he also earns his first Lucas Oil Late Model Dirt Series victory of 2019 and became the 18th different Series winner this season.
Davenport led from the start of the race and appeared to be on the way to his first Pittsburgher 100 victory. Throughout the latter half of the event, he fought off O’Neal’s constant challenges, but was pulling away when a caution came out for a stalled car in turn four. Under the lap 93 caution, Davenport slowed to a stop in the middle of the backstretch, and was pushed back to the hot pit area to add fuel to his Longhorn Chassis.
Earl Pearson Jr. charged from the 23rd stating spot to finish second behind O’Neal. Tim McCreadie rallied from two pitstops to finish in third. Jimmy Owens fought his way back to finish fourth after tangling with another car just shy of half way and having to restart at the tail, and 2-time Pittsburgher 100 winner, Gregg Satterlee, rounded out the top five.
Davenport sprinted to the lead at the start of the race with Hudson O’Neal and Shanon Buckingham following in second and third. That trio held the top-three positions for the first ten laps of the race. Don O’Neal then began to challenge his 19-year-old son in a battle for second. The two O’Neal’s ran side-by-side for several circuits in the race for second behind Davenport who was building a commanding lead over the field. After clearing his son, Don O’Neal began to track down Davenport. By lap 70 he had pulled his car alongside of Davenport’s in the battle for the top spot.
Don O’Neal used the late-race restart to pull away from a hard-charging Pearson to pick up the 46th Lucas Oil Late Model Dirt Series win of his career. “Man, I needed this win bad. We have a had a good car over the last month. I am pumped! Our car was better on the long green flag runs. I thought I could get by Jonathan a couple times late in the race. I tried to make him [Davenport] run a little bit harder than he wanted to and I wanted him to know I was there. My car kept wanting to die on the last caution, so I am glad the race ended when it did.”
Pearson was pleased with his well-earned finish. “We had a pretty good run tonight. We struggled all night before the feature and changed a lot on the car after the B-Main. We are definitely proud that all of our hard work paid off. The track was racy, and you could move all around it. Congratulations to Don on the win. It’s pretty crazy how these 100 lap races turn out sometimes with the veteran guys running up front.”
McCreadie charged back late in the race to join O’Neal and Pearson on the Lucas Oil podium. “I don’t know what cut the tire down earlier in the race. My car was really crooked for the early part of the race and that was making it hard on the left rear. The car got better after we pitted.”
The winner’s Clint Bowyer Racing, Rocket Chassis is powered by a Cornett Racing Engine and is sponsored by DEKALB Asgrow, Crawford Outdoor, Cometic Gasket, Ford Performance, Ditzfeld Transfer, Integra Racing Shocks, Sunoco Race Fuels, and Peak Antifreeze and Coolant.
Completing the top ten were Tyler Erb, Billy Moyer Jr., Scott Bloomquist, Jonathan Davenport, and Hudson O’Neal.