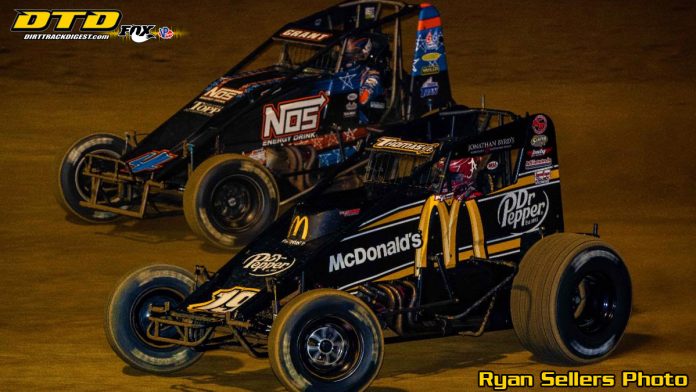 By: Richie Murray – USAC Media
LAWRENCEBURG, IN – Kevin Thomas, Jr. was bound and determined not to make any mistakes entering Saturday’s Fall Nationals at Indiana’s Lawrenceburg Speedway.
Exactly one week earlier at Eldora Speedway, the Cullman, Ala. native had a pair of chances, first in the sprint car feature where he led the first 18 laps of the 30-lap race before slapping the turn four wall and losing the lead.  Later that same night, he was a dominant figure in the Silver Crown main, leading the first 40 circuits of the 50-lapper before wall contact again knocked him out of the lead.
Saturday at Lawrenceburg, flawless was the word that comes to mind in describing Thomas’ run down the stretch to win his second Fall Nationals in the last three years, a $10,000 grand prize and his 27th career USAC AMSOIL National Sprint Car feature, moving him past Tony Elliott and Dave Steele and into a tie for 16th on the all-time list alongside Brady Bacon.
“I know our stuff’s running really well and I like Lawrenceburg already,” Thomas said.  “For us to come down here and have speed right off the bat, it’s just something we’ve been really working hard for this whole year.  We’ve had our ups and downs, got a win and struggled a little bit.  We’ve had pretty much every variation of luck and runs and what not.  It’s just nice for the hard work these guys have put in at the shop to show on the track.”
Thomas began the race from the 5th position in his Hayward Thomas Motorsports/McDonald’s – Dr. Pepper/DRC/Speedway Chevy while, up front, the two front row combatants – Justin Grant and Brady Bacon nearly met calamity as they took the green flag.  Grant got sideways at the start/finish line, dropping back to 4th before working his way back to 3rd by the end of the initial lap while point leader C.J. Leary raced around the outside of Bacon to lead the opening two laps.