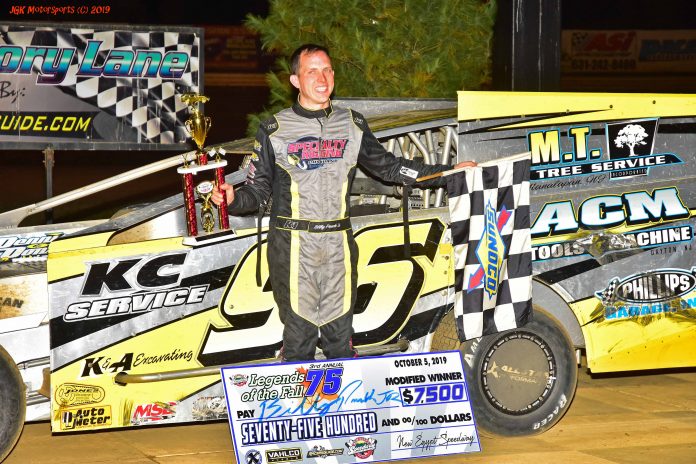 As the 75-lap Modified feature got underway, polesitter Briggs Danner grabbed the lead with Brandon Grosso, Andy Bachetti, Jimmy Horton and Billy Pauch Jr. next in line. On the fourth circuit, Grosso gained the top spot with Bachetti advancing into second and Danner dropping back to third.

Pauch Jr., the 2019 Modified champion at New Egypt Speedway, was on the march forward as he motored into third behind Grosso and Bachetti with six tours recorded. Following a lap nine caution, Grosso was still in front with Bachetti, Pauch Jr., Horton and Duane Howard completing the top five.

Over the next few laps, Howard and David VanHorn waged a good battle for fifth. VanHorn took over the position on lap fourteen just prior to an appearance of the red flag for a flare-up on PJ Oliver’s ride.

On the ensuing restart, Grosso held off Bachetti with Pauch Jr. in third. Bachetti remained in hot pursuit and eventually was able to slip by Grosso on the eighteenth revolution. By lap twenty, Bachetti was pulling away as Pauch Jr. was tracking down Grosso. T

hree circuits later, Pauch Jr. took over the runner up spot from Grosso just before Kevin Sockriter’s spin brought out the yellow flag. Under this caution period, Bachetti dropped out the race with a mechanical issue.

With Bachetti retired from the contest, Pauch Jr. inherited the lead on the twenty-fourth tour. After a pair cautions, Pauch Jr. was still in charge on lap twenty-seven with Grosso in second and fourteenth place starting Richie Pratt Jr. in third.

On lap thirty-seven, a broken radiator hose forced Pratt Jr. out of the race as VanHorn advanced into third with Howard in fourth, and Danny Bouc in fifth.

Following a fuel stop on the thirty-eighth circuit and a multi-car tangle on lap forty, Pauch Jr. was still pacing the field over Grosso, VanHorn, Howard and Bouc. Pauch Jr. began to pull to away from his rivals but his comfortable margin vanished due to a slowing Kevin Sockriter on lap forty-nine.

When action resumed, Pauch Jr. held off Grosso as Howard sped past VanHorn to take third. On lap fifty-three, VanHorn lost another position as Bouc sped into fourth.

Two tours later, racing came to a pause as Jimmy Horton’s ride slowed on the dirt oval. When the competition resumed, Pauch Jr. maintained his edge with Howard charging past Grosso for second and VanHorn taking over fourth from Bouc.

Over the final nineteen circuits, Pauch Jr. would only be slowed down by a pair of caution flags as he comfortably won his sixth feature of the season and the twenty-seventh Modified victory of his career.

This was the second year in the row that Pauch Jr. collected the $7500 Legends of the Fall event. With Howard in second, Grosso finished third. VanHorn was fourth and Bouc came home in fifth.

In the 25-lap Crate vs. Sportsman feature, Jim Housworth led every step of the way to collect his second win of the year. Housworth, who finished second in the 2019 Hammer Sportsman title chase at New Egypt Speedway, was able to hold off Ryan Heim on a last lap restart to secure the victory. Behind Heim, ninth place starting Will Dupree completed the race in third. Joe Toth came from twelfth to finish in fourth. Brandon Edgar completed the top five after starting the contest in fourteenth. The winners in the qualifying events were Art Liedl, Jim Housworth and JT Trstensky.