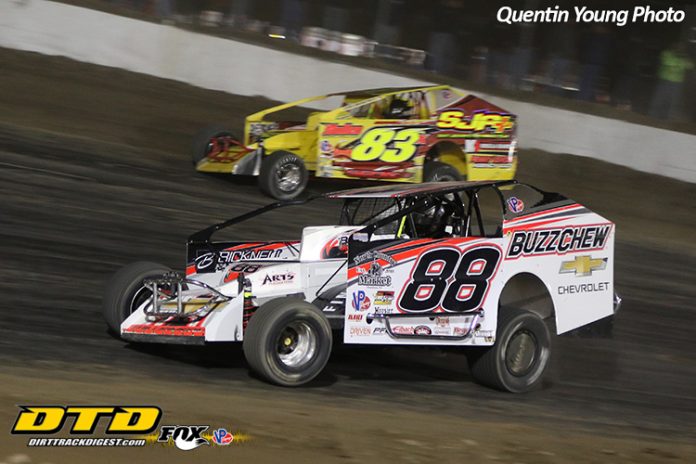 Mat Williamson has been on a great run as of late and he nearly made it an even better run on Saturday night at the Fulton Speedway in the 34th running of the Outlaw 200. He had his chances late, but came up a spot short from claiming the ultimate prize in finishing second to Mike Maresca.

“Hats off to Mike, first and foremost, this is a pretty big win,” stated Williamson of Maresca. “He drove a great race. It’s awesome to see him win in Bicknell car like that. The Buzz Chew car was good. The guys gave me a car that could win. This is a great night for the team. I’m disappointed we are second because you don’t know how often you are going to get this shot.”

Williamson’s best shot at Maresca came at the end of the event. A caution on lap 189 cleared the traffic and put him on Maresca’s bumper. He went for it at the green blasting the top of the speedway. It just wasn’t enough to help him get by Maresca.

“Nobody remembers who finishes second,” stated Williamson. “I figured I’d try something. We were good for about three laps then he started hitting his marks on the bottom there and that was the end of it.”

Tim Sears Jr., finally had some good fortune on Saturday night in the Outlaw 200. The Clay, N.Y., driver consistently advanced throughout the feature moving into the top 10 before the lap 100 break. From there he was solid in the in the second half challenging for second in traffic before coming home third.

“We started too deep,” cited Sears. “We started 32nd and in the first 100 we got to seventh or eighth. This car was really good. It was a great car. We were so close. We were there, we were in the mix.”

Like Williamson, he got a shot at the win late only to come up short. He struggled on the final restart which relegated him to his final spot on the podium.

“After the restart we just didn’t fire that good,” mentioned Sears. “They kind of drove away from us. We kind of leveled off once we got a lap or two in. I just didn’t fire as good as them guys. If we could have fired a little better I think we could gave them more of a run.”

Sears’ end of the season has been well documented so Saturday’s strong finish was a nice way to get things back on track at Fulton Speedway.

“I really want to win this one,” mentioned Sears. “We’ve been really fast here every year when we come here for the Outlaw 200. We just haven’t had very good luck. We were going for the lead in the heat race and ended up getting spun out. We had to restart last after that. The bad luck started right off the bat. We can never seem to catch a break. To be able to come through the field is pretty good.”

Billy Decker and Jimmy Phelps, the two most recent winners of the race, exited early after going down a lap later in the feature event. Neither driver was a factor during the race.