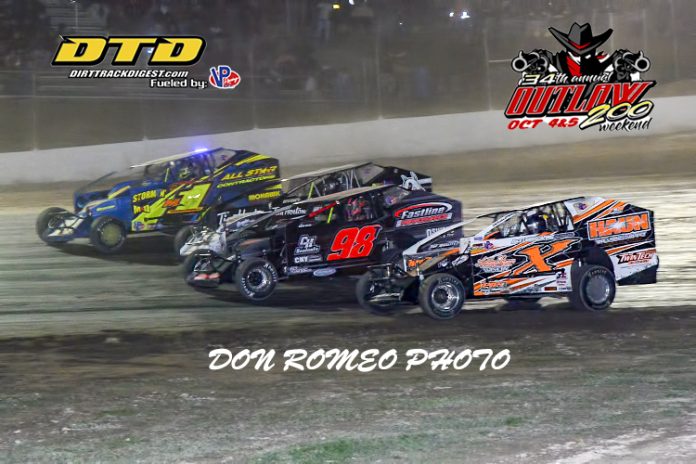 Have you ever experienced the “I left too soon” sense that you were going to miss out on something? I have many times. By the 20th lap of the Late Model feature during Outlaw Weekend at Fulton I decided to head for home so I didn’t risk falling asleep at the wheel. On the way to my car I sensed that I was going to miss something worth staying for. I was right. Charlie Sandercock was in command of the race when I left, but “it ain’t over until the checkered flags wave”.

Once I settled in on day two I heard about the spectacular chase Chad Homan mounted to win by less than a foot at the line. Day two saw a lot of spectacular racing in qualifying, last chance races, and the 250 laps of feature events that determined the Sportsman and Modified division winners.

As you’ve already read, the Sportman feature went to Kyle Inman, but not without a contest with seasoned veteran Sportsman driver Matt Janczuk. To see the growth as a driver I’ve seen in Kyle this year alone is quite satisfying. In the last few races I’ve attended he’s become man to beat.

Michael Maresca was quite impressive all day long in his bid to qualify and eventually win the Outlaw 200. A brief chat just before driver’s introductions revealed a different driver in Mike than I’ve seen in the past. He’s really developed a champion caliber focus, determination and patience.

I was chatting with another long time racer with a more than impressive resume before qualifying heats were run, and he stated when I asked if he was ready “there’s a lot if young talent out there”. Mike is growing into just that. Other impressive drives were made by Tim Sears Jr. who raced to a third place podium finish from his 32nd position in the starting grid. Modified rookie Dave Marcucculli started 34th on the grid and worked his way into ninth place. Chad Bachmann held the 44th and final starting spot at the green flag, racing his way to tenth at the line.

To summarize my thoughts on this year’s Outlaw Weekend, fantastic! The track was nearly perfect all Friday Night, held up considerably well all day and night on Saturday. The schedule was adhered to like clockwork. The racing was nothing less than spectacular. As always the staff and management pulled together to give the fans and drivers their money’s worth.

Now we’re on to Super Dirt Week beginning at Utica-Rome Speedway for the Super DIRT Week Tuesday Night Pregame DIRTcar 358 Modified Series race and a DIRTcar Sportsman series race. I’ll be representing Finish Line Chaplain Ministries all week at the satellite shows beginning Tuesday, Wednesday at Weedsport for the Super Dirt WEEK Kick-Off Party 358 series and Sportsman event. Thursday I’ll be checking in at Oswego for drivers meetings and qualifying. That evening I’ll be at Brewerton for the Hurricane 100 DIRTcar 358 Modified and DIRTcar Sportsman event. Friday I’ll be at Oswego briefly then conducting a wedding rehearsal for Mod Lite driver Tom “Mackdaddy” Mackey and his bride to be Courtney Niver. Saturday I’ll be officiating their wedding, then possibly checking in at Fulton Speedway for their season finale, the Super Dirt WEEK Wildcard event featuring a “Win and You’re In” $4,000 to win qualifier for the Billy Whittaker Cars and Trux 200. A 360 Sprint challenge is also on the card Saturday.

Sunday morning we’re hosting our annual Racer’s Chapel featuring live worship with Karl and Michelle LaGray at 10:00 a.m. Last year’s service was great, and were expecting a greater visiting of the Lord’s presence this year. Be sure to set aside the time, you’ll leave refeshed and renewed.

Looking back at my opening remarks I’m reminded of another thing I’ve quite often experienced around the sport. So many people have asked me through the years “What’s God done for me today?” I have to say, if you have to ask you really don’t know Him.
Have you ever asked a perfect stranger for something unusually costly and seen the look they give you? Did you ever ask yourself why God would do anything for you when you look at your life honestly?

Make no mistake, He knows you, He cares for you, and He wants a relationship with you. Do you desire the same for Him? Only you can open that door. Listen closely; He’s saying “Look! I stand at the door and knock. If you hear my voice and open the door, I will come in, and we will share a meal together as friends” [Revelation 3:20 NLT].

The door He’s referring to is the door to your heart. The meal is just His way of saying He wants your friendship, your time, your attention, and your affection as a sibling. Open the door and invite Him in. Enjoy the fellowship of His presence. Get to know Him now as well as you can. Another day is coming when He’ll return in all His glory and power saying to those who chose to ignore Him now ‘I tell you, I don’t know you or where you come from. Get away from me, all you who do evil.’ [Luke 13:27 NLT]

Entering a real relationship with God begins with a dialogue. Pray this way and listen to your heart as He accepts you:
“Lord Jesus, I open my heart to you right now. Come into my life and make things new. Forgive me for my choices that go against your will for my life. Forgive me for any sin, known, un-confessed, or forgotten. I accept your forgiveness and thank you for it. Fill me with the presence of Your Spirit and help me to live right by the power of Your grace.
I ask in the Name of Jesus Christ, Amen”

If you just prayed this sincerely to God you have become a child of our Heavenly Father. Welcome to the family!!! Let us know about it. I’ve got a gift for you. We’re always available to help your relationship with the Lord grow and flourish.

Email us at flchaplain@windstream.net or message us on Facebook at Finish Line Chaplain. Until we you at the races have a blessed week.