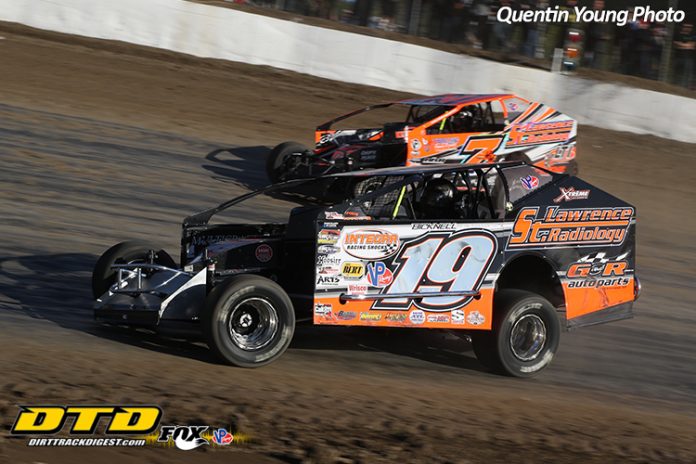 It isn’t often that an entire racing weekend can live up to the pre-race hype, but this year’s Stadium International Trucks Outlaw 200, Industrial Tires of CNY DIRTcar Sportsman Series Shootout, and accompanying support classes provided frozen and bundled up fans with plenty of good times.

The Outlaw is one of the different big races with no sanction at all, no time trials and drivers driving from the mid or back of heats to gain a qualifying spot. Maybe drivers don’t like it, but the fans certainly eat it up as they are able to watch racing and not glorified hot laps otherwise called heats.

The end result surprisingly saw the top five in spec small-blocks. Who would have thought?

Michael Maresca was as surprised as anyone in winning the biggest race of his career and the disbelief was evident in his voice as he was interviewed in victory lane.

The first half of the race Maresca was the chaser as the big-block of Matt Sheppard dominated once he took the lead on the 47th lap. Finally on lap 120 the 7mm took to the high line off two and powered past Super Matt and took over at the point.

Mat Williamson, who started 16th, worked his way to second and thirty-first starting Tim Sears Jr., were in hot pursuit.

The later stages of the 200 traffic jams became commonplace as the trio were all in the position of winning this one.

At the line Maresca was three-tenths of a second ahead of Williamson and 1.7 seconds in front of third place Sears.

The race is long enough that no matter where you start and you can stay on the lead lap in the first 100, you could be a contender. Sears was the perfect example as he picked up nine spots in the first 25 and moved into the top ten at lap 72. When the intermission came he was seventh.

By 114 he was fourth and 126 it was third. Suddenly he was a contender. After losing two track titles on the final night at Fulton and Brewerton Timmer deserved a break and finally the monkey was off his back.

In the Sportsmen event, Matt Janzcuk had to be the favorite starting outside the front row and he appeared in control until Kyle Inman took the lead with just three laps to win by 1.1 seconds.

Features, with the exception of the 4 cylinder marathon, were pretty competitive on Friday night as the weekend kicked off

Charlie Sandercock was seeking his fourth consecutive Outlaw weekend late model win and with a lap to go appeared to have it locked up, but Fulton track champ Chad Homan simply never lifted the last lap and led one and one time only right at the line winning by .012 of a second.

A race long crowd pleasing battle between Canadian Jeff May and local driver Clayt Brewer III was sensational to watch for the Mod Lites. At the checker Brewer brought the Garofolo-Earl owned 155 to victory lane by .002 of a second in one of the closest finishes I’d ever seen. In the olden days, before transponders, this would have been ruled a dead heat.

Richard Murtaugh III captured the Novice crown and Outlaw Speedway Mike Stone, who had never even seen the Fulton Speedway maneuvered traffic and easily drove away from the field to win the 4 cylinder yellow flag plagued finale.

Among surprises entering were Tyler Murray (with Dave Riley 358), Mike Stanton(in only his second 358 race), A.J. Miller, Jessica Power, Kyle Fink, Chris Hulsizer and Will Shields (in a Beyea Mod)

The first big-blocks across the line were Matt Sheppard and Larry Wight in sixth and seventh.

Sure wasn’t easy to get into the Sportsman main as 10 heats qualified two cars and every other last chance race qualified one.

Brad Rouse, who finished third, had problems on Friday night and played catch up all weekend long. He started 29th in the main and rallied for third with sensational run.

After Sandercock passed early leader Kevan Cook it appeared to be a benefit race, but Homan, who started 10th, overcame who many thought would be the winner.

Justin Williams was third behind Brewer and May while Mike Mullen and Tom Mackey completed the top five.

It was a disappointing field as it was hoped that the Can Am Series would be involved in the weekend, but apparently wasn’t interested. That would have resulted in 30 plus cars like the Brewerton Speedway had earlier this year. Some drivers who did make the long haul were Steve Commeau and Alex Danneau from Quebec along with Josie Fortier. Harley Brown also joined the regulars.

A great job by Danneau as the front tire was pushed back to the firewall in heat action, but the car was back out for the main event.

Great cross section of four cylinders and Stone simply made it a runaway and was followed by Quinn Wallis, Jacob Dupra, the lone pick up trick of Trey Palmer and Chuck Powelczyk.

The Novice event was dominated by the two drivers with four wins each in the class this year as Murtaugh and Manitta (who also nearly qualified for the main Sportsmen event) ran away and were followed by Payton Talbot, Josh Van Tassell and Michael Grover.

Outlaw Weekend is over and it was well worth being involved with.

Fans were great throughout and supported the drivers at every opportunity.

Great kick off to Super DIRT Week and looking forward to being even more exhausted by the time next Sunday night rolls along.

Obviously I couldn’t write everything that everyone wanted to see as I was taking notes while announcing or simply trying to remember what I’d seen and who I had talked to over my 28 hours at Fulton, but if I missed something send it along to foley395@hotmail.com.