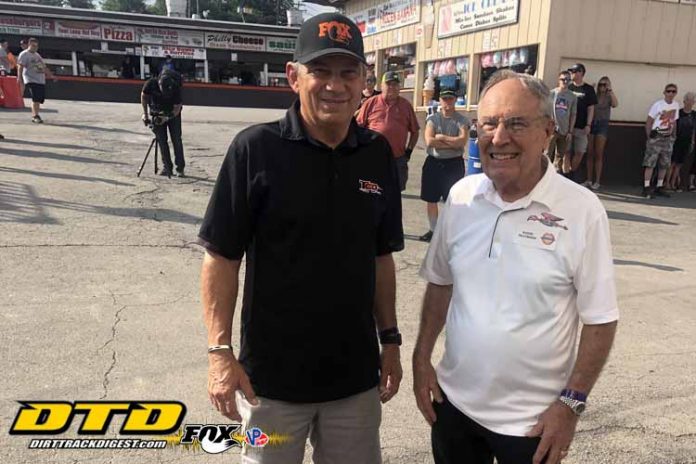 It’s hard to believe that it’s time to head to Super DIRT Week (SDW) for race fans, but this week begins the 48th running of the year end racing event that is now in its second home.

For 44 years dirt track racing’s Super Bowl was held at the New York State Fairgrounds in Syracuse.  Many race fans called it the “Moody Mile” because a driver from Saranac Lake, Wes Moody, was the first driver ever to do 100 mph at the famed oval. Moody broke the 100 mph barrier in 1970.  In 2016 the famed grandstands were torn down and the property bull dozed to be used for other venues as part of the N.Y.S. Fairgrounds.  At that time, many said it was the end of a tradition and they would not return.

In the fall of 2016 the event was moved to Oswego Speedway, a 5/8 mile asphalt oval in Oswego, N.Y.   Much work was put into transforming the surface into a dirt track by laying down clay over the asphalt for the week long event.

The first year was not ideal because prior to the event heavy rains hit the area making for difficult conditions for camping and racing.  The schedule was reworked and the events were completed and when the final checker flew on the 200 lap event, Stewart Friesen of Sprakers, found himself in victory lane for the fifth time in the event, and the first time at the new venue.

As the second year rolled around conditions showed much improvement and the fans were pleasantly surprised when they began to roll in for the racing.  Even many that had said they would not follow the event to a different venue began to make their way to see what was happening.  Dirt track’s most winning Modified driver the past few years was in victory lane for the second time.  Matt Sheppard of Waterloo, N.Y., had won the event on the fairgrounds mile in 2009.

Last year a new name was added to the prestigious Super DIRT Week win list.  Larry Wight of Phoenix, N.Y., stood holding the trophy and checker flag at the end and joined the 22 different winners of the October event. 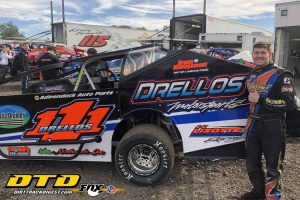 This year many eyes may be on the No. 111 of Demetrios Drellos after his performance in the Super DIRTcar Series Modified event at Albany-Saratoga that guaranteed him a spot in the 200 lap event at SDW.  Drellos has proven his diversity in winning at several different tracks, Fonda, Lebanon Valley and Mohawk and Oswego would be one he probably would like to add to the list. 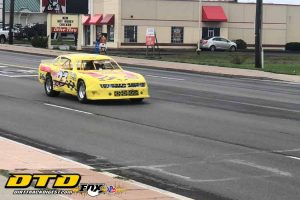 Although you can never replace SDW at Syracuse, the annual parade down Main Street in Oswego at Noon on Wednesday of SDW has helped to contribute to the event’s own atmosphere for those attending.  Oswego is slowing becoming the place to be in October for racing.  Just prior to Sunday’s event the top 30 drivers come to an area behind the grandstands for an autograph session. 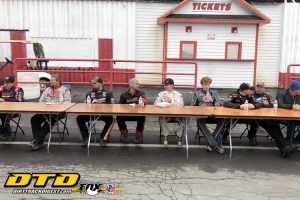 As we look at the records for Super DIRT Week and realize we are only two years way from the 50th anniversary of the event we appreciate that we are still able to meet and talk with the winners of the earlier races.  In August we spoke with the first winner of the event in 1972, Buzzie Reutimann of Zephyrhills, Fla., who was in Middletown, N.Y., for the 100th anniversary of the Orange County Fair Speedway where he ran on a weekly basis.  Buzzie won the first and the second SDW events and says he also remembers the ones he lost, some due to minor mechanical issues, a miscalculation, and major wrecks.

If you’re into the numbers like Ed it may be interesting to know that the SDW big event has been won eight times from the pole, the first driver to win from the pole was Billy Osmun in 1974 and the last one to win from that position was Matt Sheppard in 2017.  Brett Hearn did it twice and the others who did it once were, Gary Balough, Billy Decker, Jack Johnson, and Dick Tobias.  No one has ever won from ninth position, the 13th, 15th, 18th and 20th many positions further down the field. 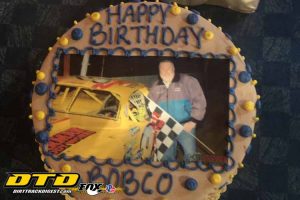 This past weekend Fulton Speedway, just down the road from Oswego, kicked off SDW with the Outlaw 200 and Fonda Speedway regular, Mike Maresca of Hannawa Falls, N.Y. added his name to the win list.  This was the 34th annual event of what was originally the Victoria 200.  Fonda regular, Stewart Friesen finished fourth. 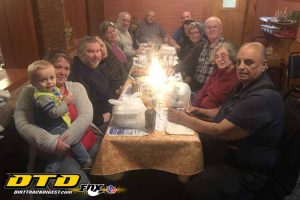 This past week we were honored to be a part of a group of friends that help Bob James (BOBCO) celebrate his birthday.  The group went to Bosco’s in Amsterdam and had a delicious Italian meal.  Mark “Krash Mender” Krosky gave Bob a beautifully decorated cake from Coccadotts Cake Shop that was shared with everyone present.

Ed and his brother Rich will be off to SDW on Wednesday, a trip that has become a tradition for the Biittig brothers.