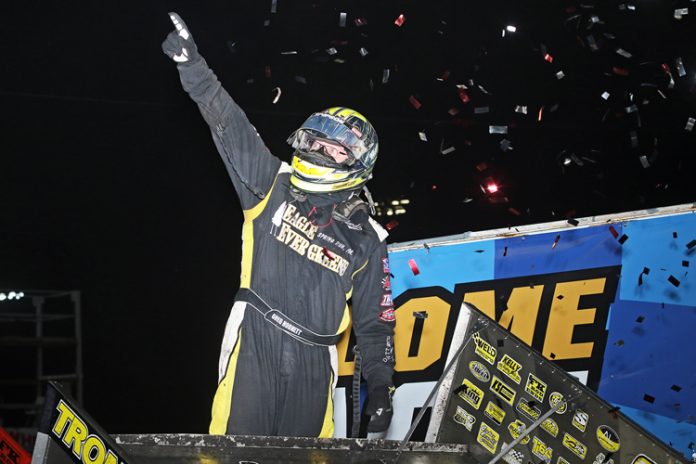 The exhibit, tentatively scheduled for May 1 to October 1, 2020, will feature cars from Greg’s career beginnings in Memphis, all the way to his dominance in central Pennsylvania and points between.  In addition, memorabilia from Hodnett’s career will be showcased.

Greg’s career started in Memphis and branched out nationally with the World of Outlaws, where he was named their Rookie of the Year.  He accumulated over 250 wins in his career, as well as multiple championships.

“We’re absolutely honored to have Greg Hodnett as our spotlight for our annual ‘Salute to Champion’ at the museum,” said National Sprint Car Hall of Fame & Museum’s Bill Wright.  “Greg had such an impact on not only what was going on on the track, but off it as well.  It’s going to be a lot of fun for us to tell his story.  He was dedicated to going faster every time out, and used his engineering background and his experience to make it work on the track.  More importantly, he was a great person!  We’re excited that one of our long-time supporters, Roger Johnson, will be on board helping us with this one.  Roger was an important part of Greg’s career, starting from the beginning.”

Wright added, “Though it’s early in the process, I can tell you that many are already involved in making this one of our greatest ‘Salute to Champion’ exhibits ever.  Early thank you’s go out to Sherry Hodnett, the Eastern Museum of Motor Racing, Jim and Sandy Kline, Mike Heffner, Mike Ward, Roger Johnson, and many more to come!  We hope to see sprint car fans from across the country coming to see our Salute to Champion Greg Hodnett exhibit inside the National Sprint Car Hall of Fame & Museum in 2020.