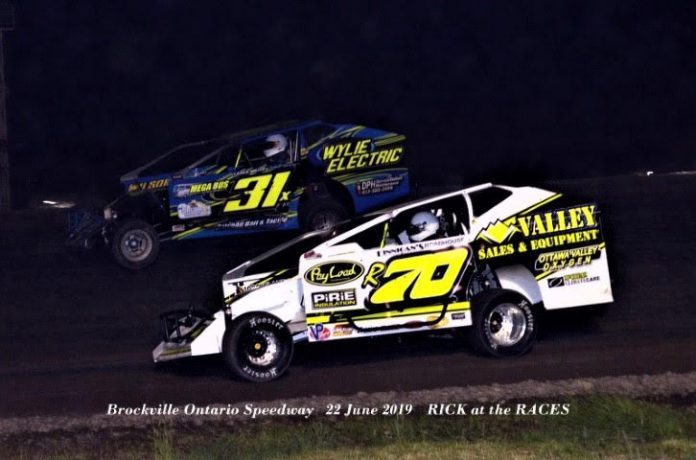 With the Mr. DIRTcar Championship Trail titles in the 358 Mod, Sportsman Modified and Pro Stock divisions up for grabs, this year’s edition of the Loud & Dirty Fall Nationals at Brockville Ontario Speedway was already packed with excitement. Teams will be doing their best to collect on some of the big money being offered during the 2-day season-ending extravaganza at the popular clay oval on Temperance Lake Road.

Friday, October 18th the Big Block Modified Series runs a 100 lapper for a winner’s purse of $7,500. Every Sportsman-Modified Series heat winner pockets a $100 bonus from Carquest King Edward Auto Parts and the 50 lap feature also crowns the Ogilvie’s Auto & Fleet Series champion. There’ll be a 50 lap Pro Stock Series and a Mini Stock Invitational. Racing starts at 6:00, with time trials prior to the green flag.

The Small Block Mods compete for the biggest winner’s cheque of the year of $10,000 in the Bullringer 110 Saturday, October 19th to clinch the Ogilvie’s Auto & Fleet champion. Action continues with an open 360 Sprint show and a 30 lap Street Stock Invitational. Time trials will precede the start of racing at 5:00. The full Saturday program will be dedicated to the memory of Mike Lasalle, a long-time track supporter, sponsor and car owner in the Sportsman-Modified and 358 Modified divisions.

“A marquee event like the Fall Nationals is a great way to bring down the curtain on our 50th anniversary season,” said Brockville Speedway owner and promoter Paul Kirkland. “Our marketing and promotional teams have done a great job spreading the word and that should translate to some very impressive numbers on both sides of the fence.”

The 1000 Islands RV 4th turn campground is ready to become its own city for the weekend and in addition to some amazing racing, this year’s chapter of the Loud & Dirty Brand Northeast Fall Nationals offers some exciting attractions in the Pat’s Auto Service & Radiator Fan Zone. Come early and check out the vendors. There’ll be great entertainment on Saturday too, with Whisky Rocks taking the stage at noon, opening-up for perennial crowd favourite Ambush who’ll rock the house from 1:00 ‘til 3:00. The post race party and bonfire feature Dirty Alibi, starting at around 11:00 after the weekend’s final checkered flag.

You can’t afford to miss a second of the action at one of the year’s biggest motorsports events. Be sure you’re part of the 2019 edition of the Loud & Dirty Brand DIRTcar Northeast Fall Nationals, a Craig Revelle tribute, presented by St. Lawrence Radiology and Rez X Racing. Sponsored by 103.7 BOB-FM and the Brockville Recorded & Times – October 18th and 19th – at Brockville Ontario Speedway.

Head to www.brockvillespeedway.com or see the track’s Facebook and Twitter social media platforms for complete event details and information.