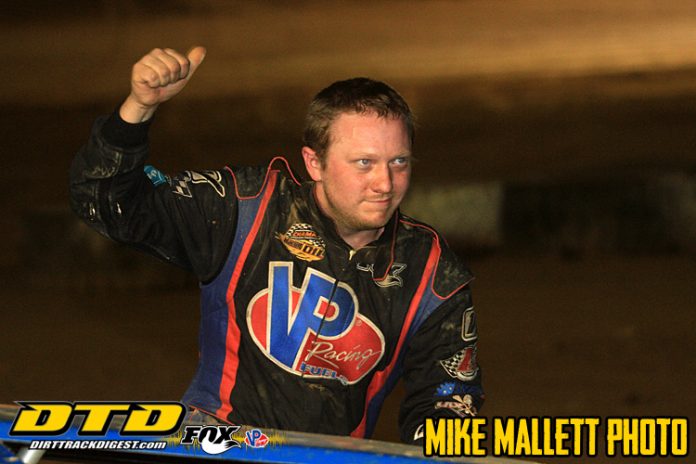 SALISBURY, MD – Even with a full plate of late season action scheduled for Erick Rudolph, he’s been able to add even more as a deal has been reached for Rudolph to head to Georgetown Speedway in Delaware on November 1 and 2 to compete with the Short Track Super Series South Region at the Mid-Atlantic Championship weekend.

“It’s official, Erick Rudolph will pilot the Chesapeake Paving no. 9R, Bicknell Pro Power powered machine at Georgetown speedway November 1st and 2nd,” stated car owner Jeff Brown.  “The idea came about by my secretary Whitney Welch who mentioned having somebody come and pilot one of my hot rods.

“So, we then talked and thought about Erick Rudolph and thought he would be a great fit. She spoke with him and the process then started. We spoke the day after Super DIRT Week and firmed the plans. He’s flying in on Wednesday the 30th to put the final touches on the cars. We are hoping for great success with such a talented driver.”

Rudolph has only run a few select Short Track Super Series events in 2019.  This opportunity presented itself giving him a chance to head south on an off weekend to run the Mid-Atlantic Championship Weekend.

“They reached out to me and we talked a little bit,” cited Rudolph.  “I was able to finalize things last weekend.  We are going to have our outing at Georgetown.  Otherwise, I probably wouldn’t be doing anything that particular weekend.  It’s always nice to race and stay sharp.  It helps you be that much more on top of it.”

It will be Rudolph’s first foray into Delaware in 2019.  If it wasn’t for the call from Brown, he would not be able head to the event with his own race cars.

“It just isn’t feasible with our own equipment,” cited Rudolph.  “We are looking forward to it.  There is a lot of potential, but right now we are going to focus on the weekend and go from there.”

Chesapeake Paving and J.W. Brown Truck serve as the primary sponsors on the car.  Both businesses are owned by Brown in Salisbury, Maryland.