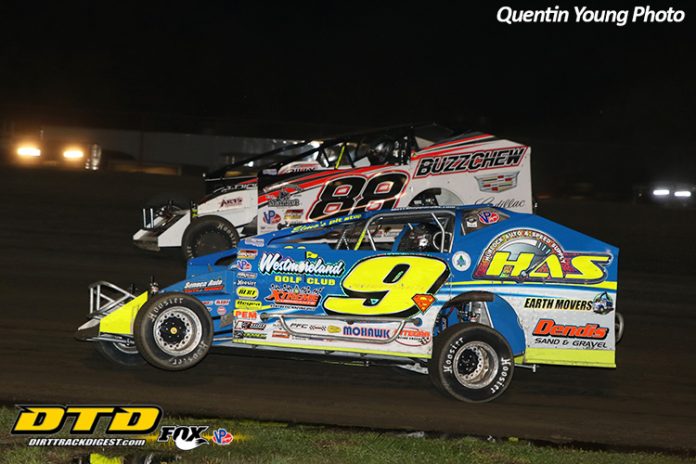 The storylines coming out of the Brockville Ontario Speedway on Friday night were endless as the Super DIRTcar Series returned to action for the first time since the annual fall classic at the Oswego Speedway as part of Super DIRT Week XLVIII.

Matt Sheppard and Larry Wight both had dreadful days at Oswego while Mat Williamson got the win and the point lead for the series.  Friday night all those storylines came into play as the series got back at it in the Loud and Dirty 100.

Sheppard got a nice $7,500 in his pocket for the win while also picking up his first ever triumph at the Brockville Ontario Speedway.  He’s tried several times in the past, only to come up short.  Friday was a nice turn around as he had a great car to advance from the 12th starting position to get the victory.

“The track was actually racey” commented Sheppard.  “It had some rough spots and bitey spots all over the place.  Luckily for me, I had enough grip.  The car turned good enough, but I think the biggest thing was that I got through the rough spots without getting car too upset.

“I don’t know if we were the fastest car at times, but mine might have been the easiest to drive.  We made all the right calls and got to the front, so we’ll take it.  I’ve never won here before.  I finished second in the small-blocks two or three times.  It’s nice to finally get to victory lane.”

Recovery Time for Sheppard and Wight

Sheppard and Larry Wight both dropped out of the Billy Whittaker Cars 200 early last Sunday.  Wight was involved in crash while Sheppard make contact battling with another car breaking the rear suspension.  They both were relegated to finishes outside of what they are accustomed to.  Sheppard, even though he pulled 12, got things rolling again, as did Wight who finished second.

“We’ve had a fast race car all month long,” cited Sheppard of his Bicknell chassis No. 9s.  “It just seems like something keeps happening.  We took the lead at Albany and didn’t even make it a half a lap and the steering box crapped out on the thing.  We held on for sixth.  We had a really good car tonight.

“Went up to the redraw and pulled 12.  I guess we got that free Hoosier tire, but we made all the right calls.  We had a really good race car at a place that is notoriously kind of tough to pass.  It races narrow.  To start 12th and drive up through the field, you don’t that here without a darn good race car.”

Wight fought hard for his second place finish while also getting things back on track.  He was disappointed after Oswego, but as most drivers do, he forgot about the poor finish and did his best to have a strong outing at Brockville.

“You have to let it go, that’s racing,” mentioned Wight afterward.  “There are no guarantees that you are going to be a top five car or a winning car.  We were a lot better than where we finished at DIRT week.  We just got to put that in the back of our head and know that we had a good car.  We had a little bad luck.”

Wight didn’t have much more to offer on Friday night.  He battled for the lead, but once Sheppard went by he focused on driving a clean race and finishing second.

“I think we definitely didn’t have the winning car,” said Wight.  “Matt was definitely a lot better.  He ran the softer tire and it showed.  We were just way too tight.  Going through the holes we were just surviving.  Once he got by me, we just backed her down a little bit and tried to conserve for second.”

By his own admission, Williamson did not have a winning car, heck he doesn’t even think he had that should have finished on the podium at Brockville, but at the end he got it done.  Williamson was able to do enough to finish third to keep Sheppard in his crosshairs for the final race of the season.

“Really, I think we just survived,” mentioned Williamson.  “I said out there, I think it’s probably the worst car I’ve ever drove to a third-place finish.  I kept looking ahead to see where Matt (Sheppard) was.  I’ve never been in this position before so all day I was a little nervous.  This place has been known to cause some havoc.  I just wanted to make it close going to Charlotte because I know I’ll have a shot down there.”

Sheppard came in trailing Williamson in the point standings by 10 for the Super DIRTcar Series.  After Friday night, he now has a six point advantage.  The pair will head to the World Finals at The Dirt Track at Charlotte with the 2019 Super DIRTcar Series title hanging in the balance.

“I’ve been to Charlotte with the points battle every which way before,” cited Sheppard.  “I’ve gone  there behind, ahead, big lead and a small lead.  I don’t know, it’s another year.  It all boils down to we have to go down there and perform.  Whoever beats who is going to win the championship.  It doesn’t get much simpler than that.”

Unlike Sheppard, Williamson has never been in a position to win the championship heading into Charlotte.  It’s new territory for the driver out of St. Catharines, Ont.  With that said, he’s not worried.  He’s excited about the chance to race it out.

“I’m ready,” stated Williamson.  “I love Charlotte.  It’s going to be a little different than this place.  I think the best car is going to be ahead because of how wide and racey it gets.  It suits my driving style.  Our car seems to be really good there.  We’ve come on to something late that I think we can bring down there and win with.”

It was not a good night for defending race winner Erick Rudolph.  Rudolph was battling for a spot on the podium with Demetrios Drellos and Sheppard.  Drellos changed lanes and moved up the track forcing Rudolph to change his line entering turn one.  Rudolph go too high, went over the top berm and caught the lip on the other side of the banking.  His car flipped multiple-times before coming to a rest on its side.  Thankfully he wasn’t injured.  His night was over at that point…

Billy Decker actually led a lap early and was running second when something broke in the rear of his LJL Racing No. 91.  The right rear of the car sat on the tire as he headed to the pits.  Upon returning to action, Decker rallied and finished in spot four…

Michael Maresca was on a march forward and was up to third only to have something inexplicably break in the front end of his No. 7mm.  He shot up the speedway in turns three and four and went over the bank.  His car was hooked by the nose and towed in ending his evening…

Jack Lehner scored his best career Super DIRTcar Series finish with a fifth-place effort.  The ‘Ginja Ninja’ led up until a restart with 25 laps to go.  Sheppard got the drop on him and made the pass for the lead.  He held on for the solid night at Brockville.