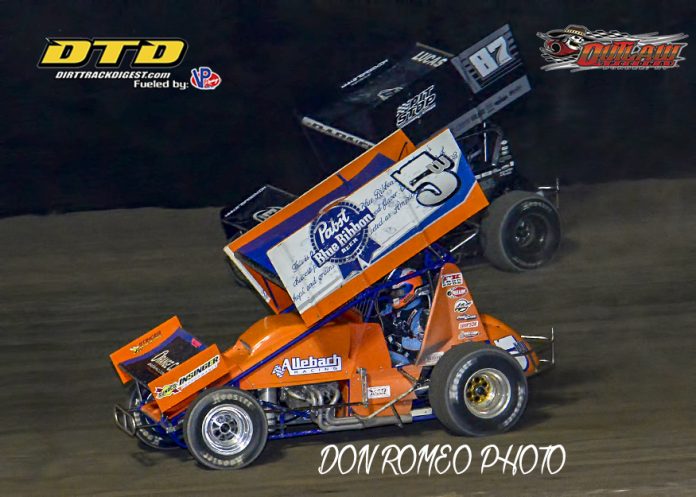 DUNDEE, NY – Night one of the 4th Annual Dutch Hoag Memorial at the Outlaw Speedway saw some 127 cars in competition all vying for feature and Dash qualifying wins.

The Friendly Chrysler, Dodge, Jeep, Ram Modifieds had sixteen machines take to the speedway for their Dash Special where the winner will automatically start on the pole for the following nights 70 lap, $7,000 to win Dutch Hoag Triple 7’s Memorial event.  Cory Costa came away victorious in the event, however a scary moment in the early going found Chris Ostrowsky taking a nasty side over side tumble down the front stretch after making contact with another competitor while running in the top three.  Ostrowsky was able to exit the machine after several minutes, waved to the crowd and walked back to the pit area; however his machine suffered severe damage.

In addition to the beautiful trophy and a front row starting spot for the Saturday A Main, Costa also pocketed a cool $500 for his win.

The Stan’s No Tubes Street Stocks like wise ran not one but Dash Special 15 lap events as some 27 cars were pit side.  In the first event Jake Karlnoski was the winner and in Dash number two Glen Whritenour claimed the victory.  Both drivers will lead the field to the green flag in the Empire 100 on day two of the season finale.

The 360 Sprints were the headline division on this night as a joint effort between the Lucas Oil ESS Sprints, the A. Verdi Storage Containers Patriot Sprints as well as URC found a solid 24 car field take to the Fast 4/10 of a mile clay oval.  Early evening qualifying heats went to Will Glover, Jordan Thomas and Jonathan Preston.

With nearly two inches of rain fall earlier in the week in the Upstate Region of New York it was definitely a very fast race track and with cold temperatures all evening long it kept plenty of moisture in the speedway providing for unbelievably fast times and a tacky/heavy cushion.

In hot laps, Canadian, Jim Huppunen set fast time with a lap of 13.321; however it was Jonathan Preston that blistered the track with a time of 12.721 in winning heat race number three.  It should also be noted that on this night the 360 sprint lap times were comparable to the 410 sprint times when the Tony Stewart ASCoC Series visited Outlaw Speedway in June.

When it was time for the 25 lap A Main and by the luck of the top twelve re-draw, Will Glover and Jonathan Preston brought the field to the opening green flag.

Preston picked right up in the feature where he left off in his qualifying heat by bolting away from the rest of the field in the opening laps.

The first of five yellow flags would fly on lap two as newly crowned ESS Series Champion; Paulie Colagiovanni dropped over the top of the banking in turns three and four bringing out the caution.

On the restart Preston again walked away from the rest of the field and within three laps was back into lap traffic.  The second caution would wave on lap ten for the machine of Will Glover who did a half spin in turn two.

On the restart Preston was again in command until lap twelve and he would succumb to a flat right rear tire and apparent suspension damage ending any chance he had of backing up his ESS win at Outlaw this past May 17.

From there Jason Barney would assume the lead as a pack of hungry competitors were in tow.

Caution number four occurred on lap fifteen for the sixth place running machine of Jordan Thomas and it was on the ensuing restart that things would really heat up at the top of the field.

Lucas Wolfe who started inside the fifth row had worked his machine into second place and after a spirited battle with Barney made a gutsy move to the outside and took over the lead on lap seventeen.

Scott Holcomb had a right rear tire explode entering turn number one on lap eighteen bringing out the fifth and final yellow flag and from that point Wolfe  was able to keep Barney at bay and went on to his second consecutive 360 win as part of the Dutch Hoag Memorial Weekend at the track.

Local Dundee fan favorite and second generation driver, Brett Buono has had an awesome second half of the 2019 season having found some real speed in his 602 Crate Sportsman.

Running on Hoosier Tires, Buono made a nifty lap twenty eight pass on then race leader Andrew Smith who had led from lap six and came home with the $1,500 victory.  Smith was able to hold on for second place at the finish followed by track regular Tommy Collins Jr., Zach Sobotka and Luke Carleton who rounded the top five.

Buono capped off a perfect night by winning his qualifying heat along with Andrew Smith, Marshall Hurd and AJ Lloyd.  The consi was claimed by Hoosier Tire Rookie competitor, Bryan Rhodes.

The Mighty 4 Cylinders racing under Outlaw rules were also on the card and with 30 cars pit side it required four qualifying heats which were claimed by Scott Lehman Jr., Cole Susice, Ray Hyer and Mike Stone.  Chris Bonoffski picked up the win in the consolation event.

In the 20 lap, $750 to win feature it was track regular competitor Ray Hyer coming from the tenth starting spot to claim his third feature win of the year.  Chasing Hyer across the line were invaders Chris Leone and Bill Wells Jr. as Outlaw Speedway regular, Scott Lehman Jr. followed in fourth.  Stan Matthews completed the top five finishers.