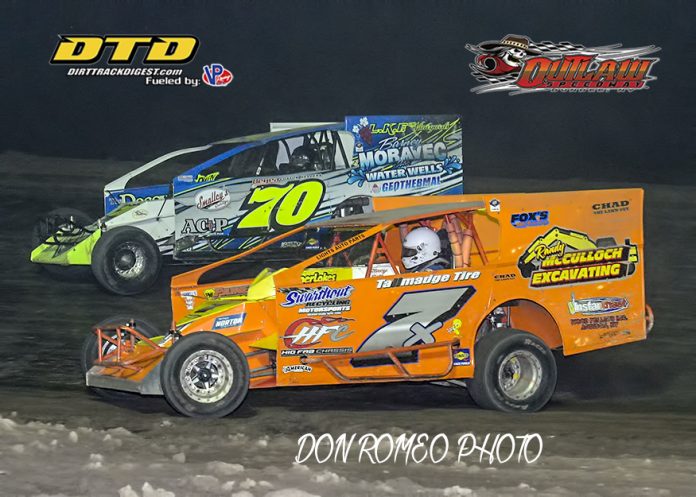 DUNDEE, NY – Day number two of the 4th Annual Dutch Hoag Memorial Weekend did not start off very well as at the drop of the green flag for the very first heat of the evening in the Sportsman Division the machine of Tim Guild was launched into the front straight away safety catch fencing right at the flaggers stand ripping a gaping hole in the fencing and causing a one hour delay while the necessary repairs were made.

Once racing resumed the 186 cars that had registered for competition in the seven classes of action all took their turn on the 4/10 of a mile clay oval and after a multitude of qualifying heat and consolation races the fields were set for the feature events.
The Sunrise Insulation Crate Sportsman took to the speedway first for their 30 lap feature which would also crown the season long Outlaw Speedway American Racer Tire overall champion.

Kenny Peoples Jr., who only races at Outlaw very sparingly found himself along with current series point leader, Tommy Collins Jr., leading the twenty-four car field to the opening green flag. A multi car incident on lap three would bring out the first yellow flag and with only two additional caution flags to slow the event, Peoples was able to hold off the relentless challenges of Collins to come away with the win. The $2,000 victory for Peoples would wrap up a very successful season after winning the track title in 2019 at the Woodhull Raceway. It has also been a very trying year as his father and mentor, Kenny Sr. has battled cancer throughout most of the season.

With Collins second place finish and a seventh place run for his closest point challenger, Kenny Hammond, Tommy Collins Jr. was crowned the overall Outlaw Speedway American Racer Tire Series Champion. Finishing third in the feature event was invader Zach Sabotka while 2019 Outlaw Speedway Track Champion, Brian Fish and Steve Gray rounded out the top five. For Iceman Steve Gray it was a nice recovery after getting swept up in the lap three skirmish, losing the entire right side of his machine, starting at the back and mowing thru the field.

By virtue of winning front row dash races on Friday night, Jake Karlnoski and Glen Whritenour led the $2,000 to win field to the opening green flag with Karlnoski immediately jumping into the early lead. However, the third generation pilots turn at the top would be short lived as last year’s Empire 100 winner, Glen Whritenour would take the top spot and dominate the century long grind including a scheduled mid-race break for fuel and adjustments. For the two time Stan’s No Tubes Street Stock Track Champion it capped off a stellar season which found him victorious in three 100 lap events as well as a runner-up in the points to Cecce in 2019 at Outlaw Speedway.

Kurt Stebbins, no stranger to winning 100 lap feature events was also able to wrap up a successful season by finishing second as he was followed across the line by other journeymen racers in Butch Green and Gene Sharpsteen while track regular, Chuck Winslow put on a steady drive to complete the top five finishers.

As the event unfolded Costa led in the early going but all eyes were on the Big 3 of Matt Sheppard who started twelfth, Alan Johnson ninth and Steve Paine sixth on the opening grid.

Super Matt Sheppard, the 2019 FCDJR Track Champion had early problems and had to go pit side while both AJ Slideways Johnson and Hurricane Paine were methodically working their way to the front.

Steve Paine, who won the previous 70 lap Dutch Hoag Memorial which was held over until April of this year due to late 2018 season rain and snow was able to get to the front first and from there only had to hold off the constant pressure of AJ Slideways who tried everything possible but just could not find a lane to get by The Hurricane and when the double checkered flags waved it was Paine taking the $7,000 win over Johnson by less than a second. A fast closing Pat Ward who started fifth piloting the Beyea 121 would have to settle for third. Super Matt fought his way back thru heavy traffic after the trip to the pits and wound up fourth as he just nipped Costa at the line as he would round the top five and took home a nice check to finish off his successful 2019 campaign.

In the Marion Decker Insurance IMCA Division it was newly crowned Outlaw Speedway Track Champion, Brandon Smith capping off a dream season as he was able to beat a stellar field of machines in their 20 lap feature event, his seventh win of the year and with it the $1,000 pay check. Tony Harris and Brad Smith would bring the twelve car feature field to the to the opening green flag, but second row starter, Brandon Smith wasted little time getting to the front and went on to the win. Tyler Stoddard was able to hold off a pack of top notch drivers to finish second while track regular Brad Smith would claim the final podium spot. Four time 2019 Outlaw Speedway feature winner, Rich Michael Jr. followed across the line in fourth while Ray McClure rounded out the top five finishers.

The 4 Cylinders were also a part of the two day Dutch Hoag Memorial Weekend running Friday night under Outlaw Speedway rules, however on day two the rules were opened up and so did the flood gates with a number of invaders trying to take home the big check and trophy.

In the feature it was a mix of track regulars and invaders as Chris Leone and Stan Matthews would bring the starting field to the opening green flag. Matthews was able to get the jump and go onto the win the $750 pay day. Tim Dunn who started in the third starting row came home for second at the finish as he was chased across the line by pole sitter, Leone. Track regular, Bob Doolittle who came from deep in the field after winning the consolation event put on the drive of the night finishing fourth as 2017 Outlaw Speedway Track Champion and second generation driver, Mike Stone completed the top five.

Qualifying heat races were picked up by Minutolo, Buck Mills Jr. and Wayne Ellison.
The 600cc Micro Sprints were last at bat as the 4th Annual Dutch Hoag Memorial Weekend would come to a close and the ever popular little winged warriors did not disappoint the crowd as Nick Groff would pick up the $600 winner’s check as he was chased across the line by Michael Kaiser, Ivan Forney, Timmy Lotz and Eric Weiss. Local competitor and former Outlaw Speedway competitor, Kirsten Dombrowski would finish just outside the top five, however she was able to pick-up a qualifying heat race as did Lotz.

And with the final checkered flag waving it puts a wrap on a very successful 2019 season at the Outlaw Speedway and the 4th Annual Hoag tribute event which saw over 310 cars take part in the two day event that included 9 different classes of competition.

Up next it will be the Annual Awards Banquet scheduled for January 25, 2020 at the Harbor Hotel in Watkins Glen so mark the date. More details on the banquet and ticket purchases will be forth coming.