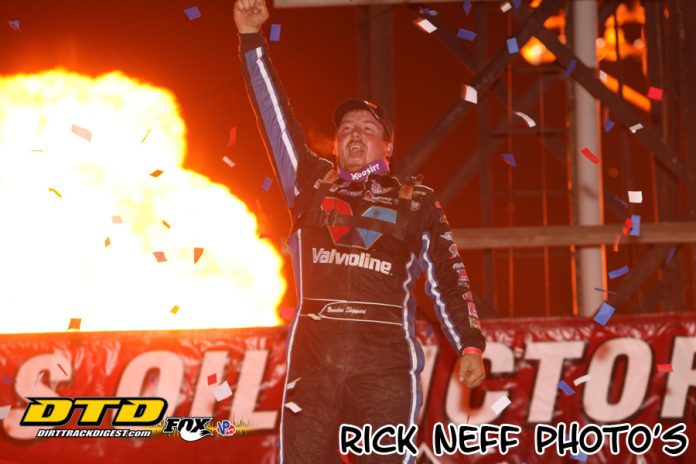 PORTSMOUTH, OH – Brandon Sheppard captured the Lucas Oil Late Model Dirt Series-sanctioned 39th Annual Rhino Ag Dirt Track World Championship – Presented by Optima Batteries on Saturday night at Portsmouth Raceway Park. He earned $100,000 for his third career DTWC victory and also marked his 25th victory of 2019.
Sheppard was one of four different race leaders in the 100-lap event. Mike Marlar finished in second, with 2019 Eibach Rookie of the Year, Tyler Erb finishing in third. Rounding out the top five were two-time DTWC winner Josh Richards and Dennis Erb Jr. Richards was in position to become the first driver in the 39-year history of the race to win the crown jewel race three years in a row and kept himself in the hunt for the entire distance.
Shane Clanton took the lead at the start of the race and led the first five laps until former DTWC winner Jimmy Owens passed him for the top spot. Owens then held the point for several laps before yielding the point to Sheppard. Sheppard briefly gave up the lead to Richards on lap 68, but the very next lap Sheppard regained the point for good. Sheppard withstood a caution with ten laps to go and then controlled the last ten laps of the race by distancing himself from both Marlar and Tyler Erb for his third $100,000 win of the year.
In Lucas Oil Victory Lane for the fourth time this year, Sheppard thanked his team for a special year. “The year we have had has been unbelievable. My guys are the best of group of guys I have ever worked for. My guys are the best at what they do. They give me the best equipment night in and night out. I just go do my job with it. Thanks to Mark Richards, Steve Baker, and all of my crew, Austin Hargrove, Joel Rogers, and Danny White. It’s been a dream year. It looks like they had a heck of crowd and to do it in front of them is special.”
Sheppard’s other $100,000 victories this season came in the Dirt Late Model Dream at Eldora Speedway ($125,000) and the Dirt Million at Mansfield Motor Speedway ($101,000). “I want to thank everyone who helps me, especially my family back home, dad, and grandpa. Without them, I wouldn’t be where I am at today. When I started my career, I never thought I would be a three-time Dirt Track World Champion.”
Marlar was seeking his first win in the famed event but came home in second. “I got my car a little looser than I wanted to. I tightened it up more than I was last night, but I was a little loose. Honestly, I was on a softer left rear tire than Sheppy. Earlier in the race when I could tell that I was in a little disadvantage when it came to tires. My best chance was to take it easy on the tires to be there at the end.”
Erb claimed the 2019 Eibach Rookie of the Year finishing on the podium and he ended the year with six series wins. “I was a little behind where I wanted to be early in the race, because I started ninth. Those other guys put themselves in a better starting position. I am very happy with the finish tonight and this year. I broke Randall’s streak of three wins in a row tonight, but it has been an awesome year for us at Best Performance. To come out of this season with the Rookie-of-the-Year Championship is fantastic, and I can’t wait for our team to build on that next year,” said the Best Performance Motorsports Team driver.
The winner’s Mark Richards Racing, Rocket Chassis House Car is powered by a Durham Racing Engine and is sponsored by: Valvoline, Seubert Calf Ranches, Ace Metal Works, Sunoco Race Fuels, Gunter’s Honey, Integra Racing Shocks, and Keyser Manufacturing.
Completing the top ten were Bobby Pierce, Scott James, Scott Bloomquist, Hudson O’Neal, and Kyle Bronson.
Dale McDowell won the Jim Dunn Memorial Non-Qualifiers race by holding off Jared Hawkins for the win. Brandon Overton led early in the race, but he tangled with a car that he was trying to lap, and was knocked out of the race lead. McDowell then led the rest of the race. Hawkins tried to make it close but just couldn’t overtake McDowell as the checkers waved. Hawkins finished in second, followed by R.J. Conley, Doug Drown, and Brandon Fouts.
Lucas Oil Late Model Dirt Series
Race Summary
Friday, October 18th, 2019
Portsmouth Raceway Park – Portsmouth, OH