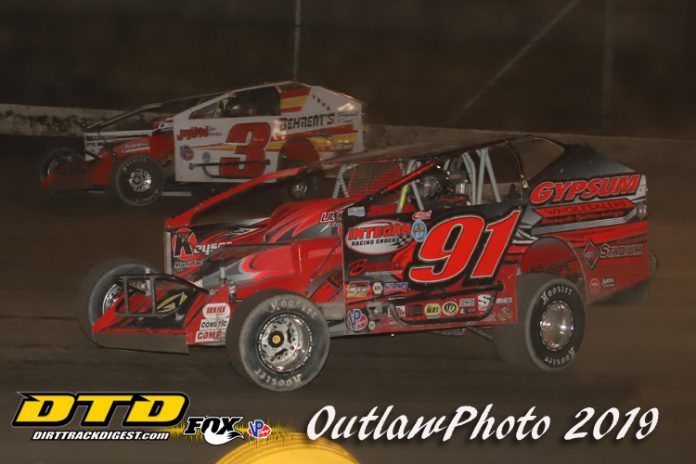 MIDDLETOWN, NY – When the Orange County Fair Speedway gates swing open on Friday morning, October 25, it will signal the start of the 58TH annual Eastern States Weekend and the headline Eastern States 200, the oldest consecutively-run championship race weekend for dirt track Modifieds. And this year’s event promises to be bigger than ever.

In front of the historic covered grandstand, upwards of 200 race teams and their drivers will compete in a full weekend of dirt track stock car action. With $40,000 going to the winner of the 2019 Eastern States 200, and $15,000 to the Saturday preliminary Small-Block Modified 100 victor, plus a $10,000 bonus for a sweep of the two races, one driver could leave the Middletown “Hard Clay” track on Sunday evening, October 27 some $65,000 richer. And this doesn’t include special awards like money for fast time and the pole position in the 200, nor the lap money in both races to the leader of each completed circuit.

In the previous 57 Eastern States 200 races, there have been 32 different winners. Legendary Frankie Schneider won the inaugural race, then run at 100 laps, back in 1962. Schneider won twice more, becoming one of eight drivers to capture this prestigious race more than once.

In addition to the on-track races, the weekend celebration includes several fan participation activities. These begin on Friday at 11:00 am with a parade of race cars from the Fairgrounds along Wisner Avenue to NY-211 to Carpenter Avenue and back to the Speedway. Also on Friday, at 12:30 pm, there will be a special autograph session with the Eastern States Champions, and at 1:00 pm, the NASCAR Bristol truck race will be shown on televisions throughout the grounds. At 4:00 pm, there’s a Brew Party at the 31st Lap Tavern celebrating the launch of Eastern States Ale from Equilibrium Brewery of Middletown. Following the Friday evening races, there will be fireworks, a fan bonfire, and a Halloween Party at the 31st Lap Tavern.

Saturday’s special activities include a Corn Hole Tournament beginning at 10:30 am, RC races at 2:00 pm, an on-track fan photo opportunity with the top-12 Modified cars and drivers following the Small-Block Modified preliminary races, and after the Small-Block Modified Championship 100, a fan bonfire, and the traditional New Year’s Eve Party at the 31st Lap Tavern.

Bright and early on Sunday morning, at 10:00 am, there’s an autograph session with the drivers already qualified for the 200. And at 11:00 am, kids Power Wheel races will be held at the RC track. Also on Sunday, the winning Duesenberg from the 1919 first auto race at Orange County Fair Speedway will be on display.

Victory Lane celebrations for each day’s headline race will be held in the plaza behind the covered grandstand.

The 58th annual Eastern States Weekend is set for Friday through Sunday, October 25-27 at the Orange County Fair Speedway in Middletown, New York. Advance ticket information and weekend schedules are available by calling the track office at 845-342-2573 during business hours, or by visiting www.orangecountyfairspeedway.net. Additional news and updates may be found on the Orange County Fair Speedway Facebook page.

BONUS EVENT: On Thursday, October 24, Brett Deyo’s Short Track Super Series returns to Orange County Fair Speedway with the “Hard Clay Finale,” a 50-lap romp around the historic five-eighths-mile clay oval for the combined Big-Block/Small-Block Modifieds. Preliminary heat races will set the field for this special race. Tickets and other information can be found at the Orange County Fair Speedway website.