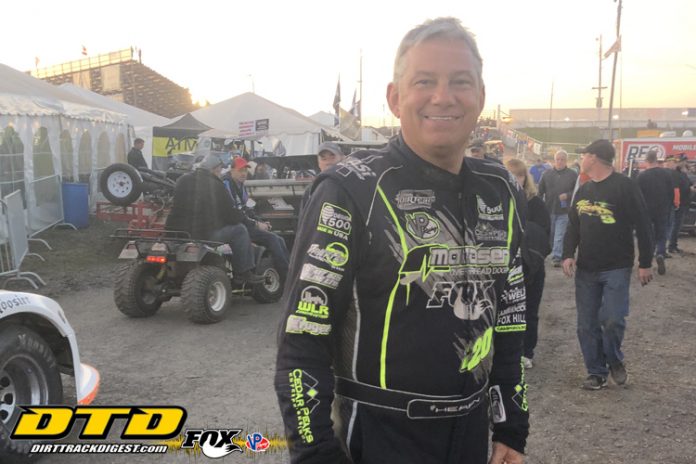 Thursday, October 24, kicks off the weekend with the Bob Hilbert Sportswear Short Track Super Series fueled by Sunoco under the direction of series promoter, Brett Deyo.  The Hard Clay Finale is the eighth and final event on the Halmar International North Region Championship schedule.  Going into this event, Matt Sheppard of Savannah, NY is the point leader.  Sheppard is also the overall most winning Modified driver for the 2019 season with 36 wins with three of these coming at Orange County.   Going into the weekend Matt looks to be the favorite to win or at least one of the favorites.  At one time this season, Sheppard was looking at not being able to race at Orange County, but that issue was resolved and he could be there this weekend trying for his first win in the ESW 200.

According to Raymond Martin’s book, “The Hard Clay in Orange County” the Eastern States event started as a 100-lap open competition race in 1962 open to any driver in the U.S. as long as the car met track specification.  The very first winner was the legendary Frankie Schneider of Lambertville, NJ.  Schneider was a regular at the Orange County oval known then as Victoria Speedway.  The name was later changed to the OCFS.  For Fonda fans who are old enough to remember, several Fonda drivers were there to compete at the historic event and did very well.  Kenny Shoemaker qualified in the first heat, Lou Lazzaro in the second and Ernie Gahan in the third.  The “B” Main showed Pete Corey and Howie Westerfelt in qualifying positions. The top five finishers in the first ever Eastern States event was Schneider, Bobby Malzahn, Sonny Stumpf, Ernie Gahan, and Kenny Shoemaker.

Currently active drivers that could be on hand this weekend to compete are Brett Hearn who has won the event 12 times or 21% of the previous 57 events.  Second on the win list is his arch rival, Danny Johnson with six wins or 11% of the events run.  Others on the list are Frank Cozze, Jimmy Horton, and Stewart Friesen with two wins each.  Stewart Friesen is the defending champion of the ESW 200.  Single winners currently active are Rich Eurich, Billy Decker, Bobby Varin, Jeff Heotzler, Tommy Meier, and Jerry Higbie.  We are certain many will be trying to add their name to the list. In 1977 the 358 Modified event was added to Eastern States Weekend.  Leading the win list is again Brett Hearn with 17 wins or 40% of the events run, second again Danny Johnson with five wins or 12% of the events.  Kenny Tremont has three wins, Jeff Heotzler and Stewart Friesen both have two each.  Single wins belong to Alan Johnson, Jerry Higbie, Billy Decker, Jimmy Phelps and Brian Krummel.

This weekend’s schedule looks like this, Friday begins ESW with a parade on Route 211 at 11:00 am, autograph session, hot laps, time trials, launch party, Sportsman heats and “B” Mains, at night the Modified Race of Champions, and Eastern States Championship 50-lap feature, closing out with fireworks, bonfire and Halloween Party.  On Saturday the Small Block Mods will time trial and qualify by heats and “B” Mains before the running of the Eastern States Small Block Mod 100-lap feature beginning at 7:00 pm.  Sunday the weekend culminates with a ESW 200 autograph session, kids power wheels races, Eastern States Street Stock Championship, 25 laps and at 2:20 pm the pre-race ceremonies begin for the ESW 200 lap Modified Championship.

Along with a great weekend of racing ahead the rumor mill has been working overtime with news that, the most recorded winning Modified driver, Brett Hearn of Sussex, N.J., is possibly looking at a limited schedule for next season to take a management position at Orange County Fair Speedway.  Hearn is the most winning driver at the track with 307 career wins that includes Modifieds, Small Block Modifieds, Sportsman and Sprints. Love him or not you have to acknowledge what the man has done over the course of his career and he is over 60 years old.

News from Ron Hedger and the Saratoga Auto Museum, the annual Lost Speedways event is scheduled for Saturday, November 30, 2019 when once again he will look back a speedways no longer in existence and our racing heroes of the past.  Scheduled this year is Motorcycle Madness with Mark Supley and a newcomer, Paul Malecki, who has done extensive research on the history of the Altamont Fairgrounds Speedway which was the site of AAA events and early NASCAR.  Featured drivers will be Dickie Larkin and John Flach, Jr.

As we close we hope to see many of you at Eastern States Weekend.  Until next week please send all news and/or comments to biittig@yahoo.com