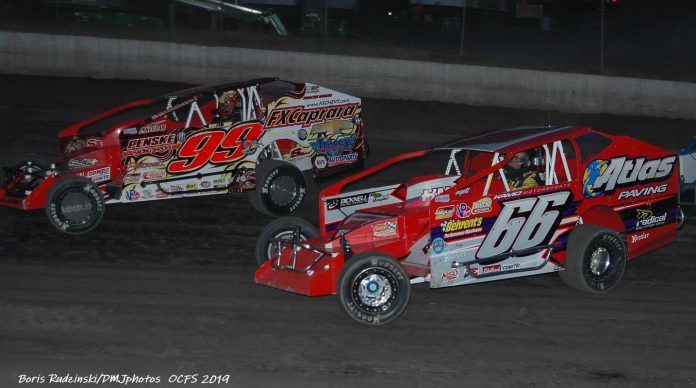 The 58th edition of Eastern States Weekend is upon us.  The entire Northeast racing community now turns it’s attention to the Orange County Fair Speedway for the annual fall classic located in Middletown, N.Y.  The Eastern States 200 is one of the longest running races in the country and one of the crown jewels of dirt Modified racing.  Every driver wants to add an Eastern States 200 win to their resume.

Coming into the weekend one can only hope that the racing action is as good as it was for the Centennial Weekend back in October that saw Mat Williamson leave with $100,000.

As we prepare to head to Middletown, several announcements and team changes have been made over the past few days.  Here’s a quick list of news and notes as we prepare for racing action to get underway on Thursday night with the Hard Clay Finale for the Short Track Super Series.

Tim McCreadie won the 2010 version of the Eastern Sates 200 in controversial fashion.  McCreadie inherited the lead after a scoring snafu gave him the lead over Stewart Friesen late in the race.  It is McCreadie’s only win in the fall classic.  He returns in 2019 with a new ride and his sites set on another win and the $40,000 top prize.

For this attempt, McCreadie will pilot a Petruska Racing ride in both the big and small-block portions of the event.  The team has won the event on three different occasions.  They won it three consecutive years in 2007, 2008 and 2009 with drivers Jeff Heotzler, Danny Johnson and Jerry Higbie.  The hope is McCreadie can get them back to victory lane at Orange County.

Matt Sheppard is returning to the Hard Clay Finale looking for a huge payday.  If Sheppard can put forth a solid effort on Thursday night he’ll win the Short Track Super Series North Region title.  By virtue of his Afton win a few weeks ago, Sheppard holds a lead of 47 points entering the finale with his total of 607. Andy Bachetti sits second with 560 points and Mike Gular is third, 57 points behind, with 550.

Sheppard has already won the American Racer Cup and $10,000.  He just needs to show up and take the green at Georgetown Speedway next weekend to win the South Region title for the Short Track Super Series.  If he can hold on to the North Region points he’ll claim an additional $25,000 courtesy of Sunoco Race Fuels.  When you factor all three combined with the bonus that could pay him $58,500 total for all his efforts.

Sheppard will also team up with the Slack Racing team in the 358-Modified feature on Saturday night.  Last year he finished third in the race so he’ll be looking to improve on that this year in the No. 3RS.

Speculation is rampant that this is Brett Hearn’s last hurrah.  If that is the case it will be a sad day for Northeast Modified fans.  There is no one that has more wins in their career than Hearn.  If he does choose to cut back or simply call it a career, he’s earned it. He will go down in history as the best ever in the division.

Stewart Friesen is the defending winner of the Eastern States 200 and he came up about a gallon of fuel short from winning the small-block 100 as well in 2018.  This year will be much more challenging for the Sprakers, N.Y., driver.

Friesen will compete in the Hard Clay Finale on Thursday night before heading south to Virginia.  He has to compete with the NASCAR Truck Series at Martinsville Speedway on Friday and Saturday.  Final practice for the Truck Series is at 2pm on Friday afternoon with qualifying the next morning at 10am.   He’ll then run the NASCAR Hall of Fame 200 in the afternoon Saturday.

Friesen will return to Middletown on Sunday in an attempt to defend his crown in the Eastern States 200.  He’ll either race is way in through the consolation or use a past winner’s provisional.

Jimmy Phelps and his HBR team have purchased two new Bicknell cars which they’ll debut at Eastern States.  Phelps and company have struggled this year with their Teo Pro Cars.  Wins have been few and far between for the team.  A switch to Bicknell’s may just be what the doctored ordered to get things back on track for the team.

Phelps’ teammate Max McLaughlin will also be competing in the Eastern States 200.

Jeff Strunk has secured a ride with David Zubikowski and the Zubi’s Racing for the weekend.  The team has partnered in the past so Strunk hooking up with the team isn’t much of a surprise.  Zubi’s Racing won the 358-Modified race back in 2016 with driver Brian Krummel.  Krummel has elected not to compete during Eastern States.

After a solid outing at Afton Motorsports Park in the Short Track Supernationals, Danny Bouc will be back in the No. 6 for the Hard Clay Finale this Thursday.  Bobby Varin put up a strong effort as well and he’s an expected entrant on Thursday night.

Other’s expected to be in attendance are Fonda Speedway regulars Brian Gleason, David Schilling and Brian Gleason.  Billy VanInwegen will be driving in the Loiodice Racing No. 5L.

New Driver in the Simpson 12k

Gary Simpson and driver Anthony Perrego have parted ways.  The team found some early season success with a win at Port Royal Speedway back in March.  Lately, things have not been so good which led to the team deciding to go their separate ways.  As a result, the team reportedly will have a different driver behind the wheel for the events at the Orange County Fair Speedway and Georgetown Speedway.

Dirt Track Digest has been unable to get confirmation on the exact driver of the car for these events to this point.  Speculation is that a Central New York pilot is taking over the reins.

Mat Williamson won $100,000 at Orange County in August and now he’s coming of the Super DIRT Week win in the Billy Whittaker Cars 200. Can Williamson complete the sweep of historic events and win the Eastern States 200 for the first time?  Only time will tell.

Ringoes, N.J., driver Ryan Godown will be behind the wheel of a new experimental Troyer TD 5 for the big-block portion of Eastern States weekend. Troyer’s Rob Fuller and Billy Colton will be looking for Godown to give the manufacturer some good feedback as they head towards 2020.