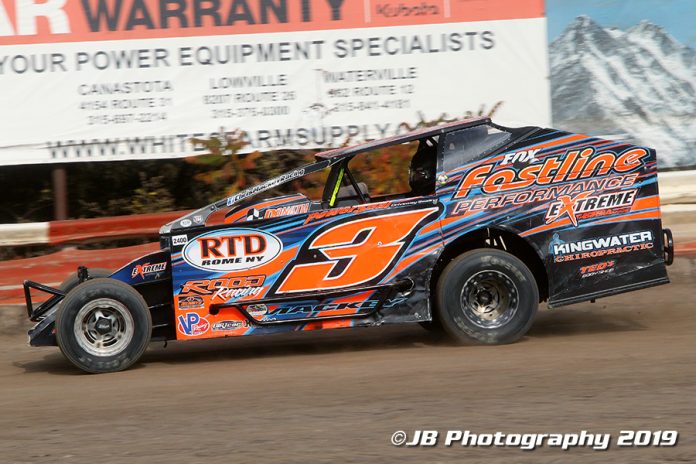 VERNON, NY –  Chris Mackey and Josh Coonradt were the big winners at Utica-Rome’s Monster Mash, picking up the 50-lap main events for the DIRTcar Sportsman and Pro Stocks.

Brian Calabrese was the early leader in the 50-lap main, with Zack Sobotka his primary challenger in the opening laps. After a few laps of steady pressure from Sobotka, Calabrese opened up and held a steady lead until a lap 16 yellow bunched up the frontrunners. On the ensuing restart, 12th starting Chris Mackey got by Sobotka for second, then putting heat on Calabrese for the lead.

A lap 22 caution and restart gave Mackey a shot at Calabrese, a shot Mackey executed well to steal the top spot. Calabrese then surrendered second to Sobotka a few circuits later, but Mackey seemed to be in full control of the event. Another rash of cautions gave Sobotka and Calabrese some chances at Mackey, but Mackey held up strong.

On a lap 41 restart, Sobotka tossed it in the corner for a hard slide job on Mackey, clearing him. However, Mackey saw it coming and turned it under Sobotka, retaking the lead easily. Sobotka’s good run ended two laps later with no gas left, allowing Mackey to walk away with the 50-lap Monster Mash DIRTcar Sportsman win. Calabrese came home second, with Michael Ballestero, Jack Miller, and William August completing the top five.

“I drove as hard as I could and started picking them off quick,” Mackey said. “We got to the front faster than I thought, I thought we were halfway when I got to third but it was just 12 laps in. This place isn’t bad on tires, and with it being cold today there wasn’t going to be much heat in them, so I went as fast as I could the whole way.”

Josh Coonradt grabbed the lead on lap 15 in the 50-lap DIRTcar Pro Stock feature after an extended battle with Aaron Henderson. Coonradt, the recent Super DIRT Week winner, dominated much of the event with little challenge, but a late caution put Tony Markou on his tail. After a brief fight, Coonradt pulled away to comfortably win the Pro Stock feature, with Markou and Dean Charbonneu the podium finishers.

“That was a long 50 laps,” Coonradt noted. “You never know who’s coming in these long races when you’re leading that long. I kept looking at the scoreboard under yellow, and saw guys like Markou moving, so I knew I had to hit my lines good.”