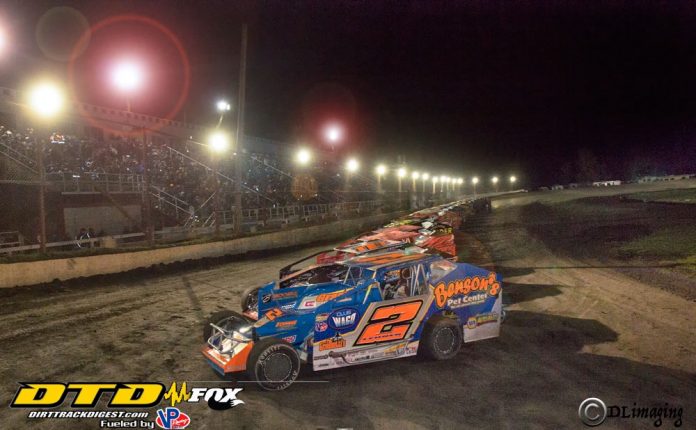 Once again the Brockville Ontario Speedway’s Fall Nationals didn’t disappoint the capacity crowds for this annual two-day event. The 11th edition of the Fall Nationals also hosted the second “Bullringer 110.” The weekend of racing started off on Friday, October 18, with the Super DIRTcar big-block Series. Once again, Matt Sheppard, one of the most talented drivers in the country, picked up his first-ever win at the BOS.

Sheppard battled hard from his 12th starting place to keep up with early race leader Jack Lehner. Lehner, the man to beat, was on a tear, having dialed the car to track conditions, and was in total command early on in the race.

By lap 22, however, he was being pressed hard by Larry Wight along with teammate Billy Decker, but by lap 24, disaster struck. Decker’s car slowed due to a rear shock failure.

Once the green came out, Wight, followed by Mat Williamson, pressed hard to pass Lehner. In the background though, Sheppard moved up onto the three front-runners and by lap 65, was passing for the lead. With this visit win, Sheppard maintains a slight lead in points over Mat Williamson by only 6 points, along with third place runner Billy Decker. Now the championship challenge moves on to Charlotte, SC, on November 7-9. Friday’s racing also hosted the DIRTcar Sportsman Series race, won by Johnathon Ferguson, giving the young driver one of his biggest wins of this racer’s career. The 50-lap feature also saw the crowing of the 2019 DIRTcar Sportsman Champion, Kevin Root, who came across the finish line in third place, giving Root his second title in as many years. I asked C.D. Beauchamp his thoughts about winning the title.

“Winning the DIRT series championship is indescribable. Winning this title after drivers like Joey Ladouceur, Rob Yetman, Jocelyn Roy and Bulldog dominated the series for over a decade, it’s amazing. Winning this championship after only two attempts makes this even more incredible for us. Last year we made all the series races and finished second behind Roy. Races at all the new tracks, especially Lebanon Valley, made me a better driver in my view and definitely helped us this season in capturing the title.”

Saturday’s portion of the weekend’s racing would see the second running of the “Bullringer 110,” worth $10,000 to the winner. The first feature of the day was the Open 360 Sprint Car race. The 20-car field was led from green to the checkered by 2018 Empire Super Sprint car champion Steve Poirier alongside nephew Jordan Poirier. The eight-time ESS champion went unchallenged and crossed the line, 0.34 seconds ahead of second-place Matt Tanner. Jordan Poirier in the 28 car rounded off the top three, coming home third.

The main event on Saturday was up next, the “Bullringer 110” with $10,000 up for grabs. With such a large purse on the line, several of the big name-drivers stayed over after the Super DIRTcar big-block show to try and capture the biggest prize of the weekend.

With drivers like Erick Rudolph, Williamson and Mike Maresca going head-to-head on the 3/8ths-mile oval, all in hopes of taking home the top prize. The “Bullringer 110” lived up to its name with Québec driver David Herbert leading the charge as the race unfolded. Herbert took the early lead after a yellow but was challenged several times by Mat Williamson, but to no avail. After several more race restarts, Tim Fuller, Maresca, and Williamson continued to challenge the leader. Herbert was definitely the car to beat.

With ten laps to go, Maresca began to come on strong and with two laps remaining, was on the tail of Herbert.

With one lap left, Maresca pulled alongside Herbert coming out of turn four but did not have the momentum to get by, giving the win to Herbert. “This for sure was an awesome win for us,” explained Herbert. “I am very happy to come home with the win over Williamson. Mat has been so good this season and to win this over one of the toughest racers on the circuit is just amazing for our team. All the guys worked so hard to give me a good performing car and their hard work paid off. Yes, it was hard to fend off a late-race charge from Maresca but our car was fast to the end, giving me one of my biggest wins when it comes to the purse in all the years I have been racing.”

The crowning of the Ogilvie’s Auto Fleet 358 Modified series was also presented to track champion Ryan Arbuthnot after coming home in fifth. The DIRTcar 358-Modified Series title was also awarded to Erick Rudolph who accumulated the points needed to take home his third title in this series.

The final race to close off the weekend and the 50th season of racing at the BOS was the Street Stock Invitational Feature, won by Nick Gauvreau.

It was a great weekend of racing and entertainment all around. Paul and Cheryl Kirkland accommodated over 300 motorhomes and campers along with all the race fans for the weekend. The event was wrapped up with their annual “After Party” with live music and bonfire — a fitting end to a great weekend along with a final race of 50 years of racing at the Brockville Speedway.