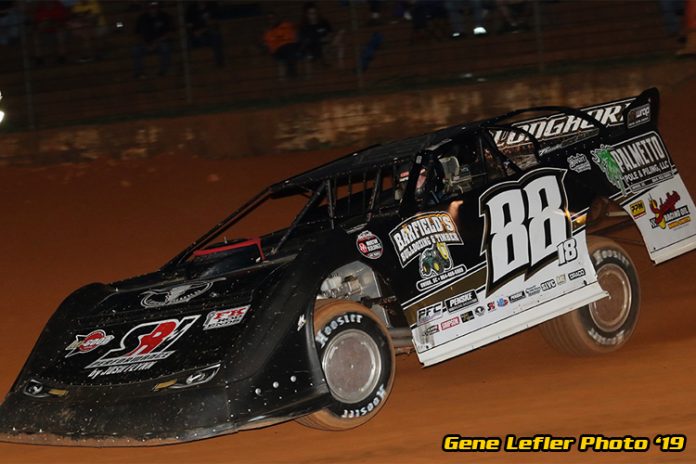 CONCORD, NC – This Thursday, Friday and Saturday, several hundred cars across nine divisions of racing are expected to gather at The Dirt Track at Charlotte Motor Speedway for the 4th annual Driven Racing Oil World Short Track Championship, Oct. 31-Nov. 2. As the event’s tagline rings true, this is a giant opportunity for the weekly racers to come out and mix it up on a big stage against some of the best competition they’ll see all year.

Now in its fourth year of activity, several drivers have had the opportunity to make the journey to one of the most elite dirt track racing facilities in the world more than once. One of which will be in action this weekend on the FOX Racing SHOX Pro Late Model roster, “The Lil Headknocker” Trent Ivey.

The 24-year-old from Union, South Carolina, has several years of Pro Late Model experience behind the wheel of his Ivey Construction #88 Longhorn, featuring the Chevrolet Crate performance engine. And he’s certainly no stranger to The Dirt Track or its Victory Lane stage, having competed in all three previous Pro Late Model events at the World Short Track Championships and winning the 2015 Circle K Shootout as part of the World of Outlaws NOS Energy Drink Sprint Car Series race at the venue.

Ivey’s nine years of experience driving a Crate engine Late Model will certainly come in handy this weekend as he and the crew prepare for some of the best competition the east coast has to offer. Fortunately, that big win four years ago has given him a ton of confidence and appreciation for the track.

“Ever since then, I’ve had a liking for the racetrack, and it’s liked me,” Ivey said. “Every time I’m there, I’m generally in the top three. I was racing for the lead at this race last year before I popped a right-rear tire.”

It’s true, his solid 2018 World Short Track efforts came to a screeching halt with five laps remaining after blowing a tire while running sixth, leaving him with a 23rd-place finish. Earlier in the race, he was on leader and eventual winner Michael Brown’s heels for the top spot before settling back outside the top five. But it’s finishes like these that motivate him to come back even stronger next year. And what better way to get stronger than to drive something a lot more powerful.

2019 has been Ivey’s rookie season at the controls of a Super Late Model around his home track of Cherokee Speedway. Garnering two wins at the track in Super Late Model regional series competition already this year, Ivey said he’s learned a lot from moving up, and it’s made him a more well-rounded pilot.

“Driving a Crate and then going to a Super and making sure I do everything I can behind the wheel has helped me the most,” he said.

“A lot of people say that Super Late Model experience helps in driving a Crate car. I say it’s the opposite. In a Super, you’ve got all this motor and you can get yourself out of trouble. But with Crates, you’ve got to hit it perfect if you’re going to be the man to beat.”

Now a two-time South Eastern Crate Association (SECA) Late Model champion after his second crowning last year, Ivey’s had a chance to race at several tracks in his region. But to him, there just isn’t anything like The Dirt Track.

“Charlotte’s a big venue, and everybody likes to go race there,” he said. “But I like the track the most. Charlotte’s unique because you can race all over it. You get to see who really can drive.”

“The clay gets slick and the track’s really wide, it’s one of the widest tracks we race on,” Ivey continued. “It’s got a top, it’s got a bottom and a middle at times, and that’s everything a racecar driver wants. You pull into a racetrack that you can race all over on, that’s like finding gold.”

A great deal of experience, familiarity with the battleground, a few career accolades earned… Ivey will, no doubt, be putting that Super Late Model knowledge to good use in contention for the Feature win on Saturday.

“I like my chances, especially knowing what I know now from racing Supers, I can incorporate it into my Crate car,” Ivey said. “When the track gets slick, you can do more things with it.”

With all of his Super Late Model racing efforts this season, he’s only had time for one Crate Late Model start this year. Ivey ran third to Brandon Overton and Ross Bailes in a 75-lap, $50,000-to-win event at Virginia Motor Speedway in September. That solid finish gave him a boost of confidence as he prepares for another real test against his familiar foes of the Southeast this weekend.

“It showed me that maybe I still got it in a Crate, hopefully it’ll carry over into this race,” Ivey said. “It’s a pretty big deal. It’s a big event for the local guys, and I guess I’m still a local guy.”

World Short Track Championship action at The Dirt Track gets underway with a practice session for all classes on Thursday night, followed by qualifying events on Friday night and Last Chance Showdowns/Features wrapping up the event on Saturday.