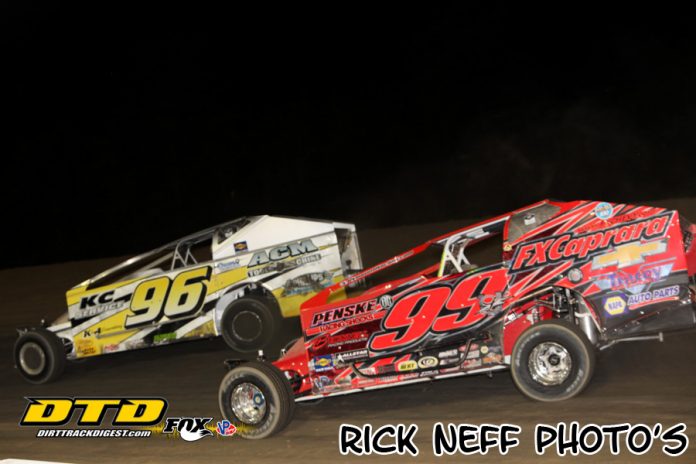 It was shaping up to be a classic duel between two of the best young veterans in our sport on Friday night in the small-block portion of the Mid-Atlantic Championship Weekend.

Larry Wight, who made rare appearance at Georgetown, and Billy Pauch Jr., were running nose to tail for the first 20 laps with Wight aboard the family owned No. 99L leading the No. 96 of Pauch Jr.

Pauch Jr., knew he had to make a move soon and after a lap 20 restart he did just that. Pauch diamonded the corner through turns one and two to try and get some momentum going down the backstretch and into turn three. The plan worked to perfection as Pauch dove underneath Wight heading into turn three forcing Wight to run the corner a little higher than he would’ve have liked.  Coming out of turn four Pauch was the new leader. Once in front Pauch would go on to put some distance between himself and Wight to take the big win.

“I knew I was a little better than Larry (Wight), but last week at New Egypt I couldn’t get by Duane (Howard) and for some reason this racing has become aero dependent,” stated Pauch while enjoying a beer in the team’s hauler after the win. “I tried the same move three times.  So, I went in early and lifted and drove across the track.  I came out under his left rear tire and I was thinking I have to send this now going into three. Once he saw me I think he got a little tight.  I was able to take off underneath him and get by.”

The car Pauch was running on Friday at Georgetown was the Rick Holsten No. 96 that he normally races at New Egypt Speedway. The team decided to take out the 358-spec motor and installed an open 358 motor a few weeks ago and it proved to be the right decision for the team.

“This motor has been really good to us. We have a mix of different combinations and like I said to other guy, I am more of small-block guy,” stated Pauch. “We have big-blocks ready to go, but I am just more comfortable running the small-blocks. I like the way they run. This is actually our New Egypt car.  We took our spec motor out and put this motor in about three races ago and we’ve won, finished second and won with it tonight so it’s been a pretty good piece for us.”

Racing wise it’s been an up and down year for Pauch or like he refers to it “a roller coaster type of season,” but one thing for sure is the “Kid’s Kid” has it rolling with the No. 96 team and especially here at Georgetown.  He’s hoping that trend will continue going into tonight’s big STSS South Region Finale.

“Like I always tell you, this racing stuff is like being on a roller coaster and I don’t know what it was but it kind of swung mid-August,” explained Pauch. “For two weeks there in the middle of the season and I think I told you this before, I was down on myself; I didn’t think I could drive anymore. I was literally worried I was going to wreck in warm-ups, it was that bad. But then we hit on something and it just clicked. We have a good Bicknell package in our cars now, and I don’t think we’ve had outside a top three car since. Even with the No. 14 at Grandview in the 76er I thought we were very good and in the Coalcracker we were really good until I got that flat. We’ve just hit on something that is very comfortable for me to drive and it’s just seems like it’s in my realm. We were down before, now we’re up so lets just hope we can keep it going for a few more weeks.”

One thing Pauch knows for sure is that he is having a good time running for Rick Holsten. The team has been through some hard times in 2019 on and off the track, but the team always sticks together and when the chips are down for whatever reason they comeback stronger than ever.

“We have a great team here and a great bunch of people and we’re confident right now,” mentioned Pauch. “When you have that confidence in your equipment and in yourself it just makes a world of difference. We’re not the flashiest race team here, we have a big dent in the side of our trailer, but we have really good race cars. Sometimes you just get with the right people and the right things happen. We have good sponsors; we have the motors that we need, but we’re about one big sponsor short of having a really good deal where we could run everything. Ricky’s has a machine shop with one guy so he puts his heart and soul into this deal, and I couldn’t respect him more for that. He is just awesome to drive for.”

It’s been a long time since Larry Wight raced here at Georgetown Speedway. Since he was heading down here to drive the Gary Simpson No. 12K in the STSS race, the Gypsum team made a last-minute decision to bring their own small-block down to race in the Friday night portion of the weekend.  It paid off nicely with a strong second place finish.

“We decided about 7:00 am yesterday morning to come down and try this out,” stated Wight. “We put the motor in, got the car ready and here we are. My wife and daughter came down to crew for me along with Tyler Murray, so we’ve made a good trip out of it. We were good.  We’ve been fighting a carburetor issue with this thing and if I couldn’t hold it open through the corners it seemed to stumble and that’s when Billy (Pauch Jr) was able to get a run underneath me. We were able to stick with him, but he’s won a lot of races here so we’ll take it.”

Qualifying for the STSS South Region finale was also on the schedule for Friday night and when it was all said and done the bigger story was who didn’t qualify instead of who made it. Craig Von Dohren, Rick Laubach, Larry Wight and Jordan Watson were the winners of the four heats…

The Sheppard No. 9S team was busy all night and looked to have replaced the rear on the car before the night was over. Of course, Sheppard needs only to start the feature event to clinch the STSS South title and secure the $57,500 prize for sweeping both STSS regions along with the American Racer Tire championship. Since Sheppard is the points leader, he is guaranteed to make the race…

The fourth and final STSS hear race was shortened to 5 laps with only three cars remaining in the race. Andy Bachetti and Richie Pratt Jr were both DNF’s but still qualified with their fourth and fifth place finishes…