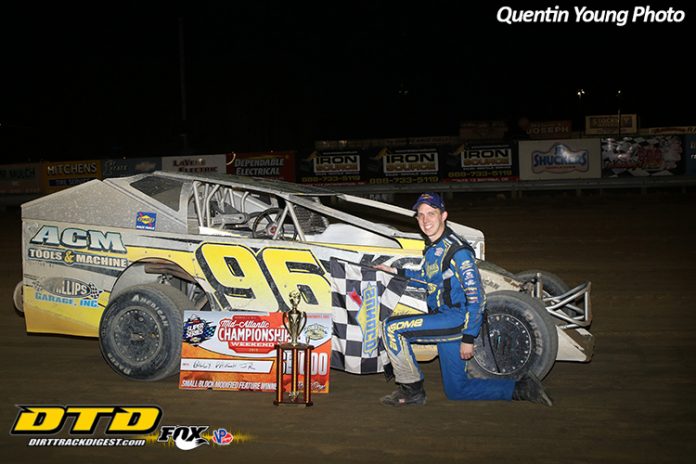 GEORGETOWN, DE – Billy Pauch Jr. continued his winning ways on Night No. 1 of the Georgetown Speedway Mid-Atlantic Championship weekend. Pauch Jr. collected the $5,000 small-block Modified win, after posting the $100 Stockley Tavern “Gambler’s Fee” at the beginning of the night, adding $2,000 to his winning paycheck.

After spending the first 20 of the race’s 30 laps running in second, Milford, N.J.’s Pauch Jr. took advantage of a restart, getting a great off of turns one and two, setting up the winning move in turns three and four.

Pauch Jr. dove to the inside of Phoenix, N.Y.’s Larry Wight to take the lead away for good. “I knew I had to try something on that restart… he (Wight) was a little tight through the middle. I thought if I could get door to door with him, I could get him,” “The Kid’s Kid” would go on to say in victory lane.

141 cars packed the pit area, and the infield, on a cool southern Delaware night to kick off the Georgetown Speedway 2019 weekend finale.

34 small-block Modifieds signed in for the night with 26 scheduled to take the green.

After the top 12 drew for their starting positions, Larry Wight and Ransomville, N.Y.’s Erick Rudolph were scheduled for the front row. However, problems arose for the Jeff Brown-owned No. 9 machine, prohibiting Rudolph from taking the green.

From the drop of the green, Wight and Pauch Jr. were joined by Sprakers, N.Y.’s, Stewart Friesen, as the top-three set a scorching pace for the rest of the field to maintain.

Every sustained green-flag run, the top-three would separate themselves from the rest of the field, but never separating from each other. Behind the lead trio, action was aplenty, specifically on restarts.

Drivers were losing and gaining positions three and four at a time on every restart. On one restart, Boyertown, Pa.’s Ryan Watt gained five positions and then lost two immediately following.

Oley, Pa.’s, Duane Howard had a scare on the lap-20 restart. After sliding in front of Friesen for third, Howard got a little sideways and collected multiple cars, but everybody was able to continue on, including Howard, but not after losing several positions.

The yellow with 10 laps remaining was where the race was won, as Billy Jr. got a great run off of turn two and pulled alongside Wight for the lead, before ultimately outdueling Wight into turns three and four and driving away with the win.

It was the New Egypt (N.J.) Speedway champion’s second win of 2019 at the Georgetown Speedway.

Larry Wight held onto a second place finish in a rare appearance for him at the southern Delaware half-mile. Stewart Friesen rounded out the podium. Bechtelsville, Pa.’s, Jeff Strunk had quiet, steady night to come home fourth, and Ryan Watt drove from his 11th starting position to a fifth-place finish.

Matt Hill was another driver who continued his red hot 2019, picking up the $1,000 RUSH Late Model win. It was his second win at Georgetown, this season. Hill had it out with Joe Warren as the two battled to the finish for the win.

Ashley Merritt won her second Delmarva Charger feature event of the season. Merritt held off a hard charging Tippy Martinez, who was looking for his second consecutive win. Greg Nailor, Scott Calhoun, and John Bailey finished out the top five.

Racing resumes for Day No. 2 of the Mid-Atlantic Championship Weekend on Saturday (today).