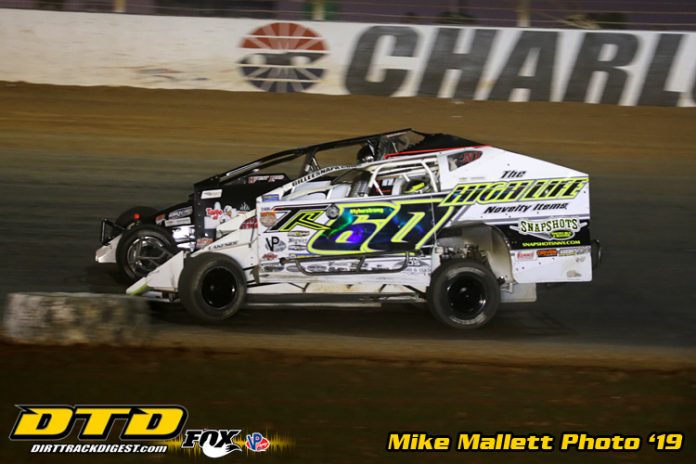 CONCORD, NC – It was a win that didn’t come easy, but at the end of 30 laps at The Dirt Track at Charlotte, Jackson Gill found his way back to victory lane for the second year in a row with the DIRTcar Sportsman at the World Short Track Championship. It was a win worth $4,000.

“To win this two year in a row is unbelievable,” commented Gill. “This is might be our last year running here so we ended it on a good note.”

Corey Cormier started from the pole via the redraw before bolting out to lead the first few laps. That lead was negated on lap four when Kevin Ridley got into the wall in turn four after contact.

Kyle Inman took advantage on the restart to gain the top spot on the next lap. He set a strong pace out front with Gill working his way up from eighth. He took over second on lap seven before applying pressure to Inman.

Inman was undeterred out front. He kept Gill at bay maintaining the race lead with Gill searching for extra grip. Iman’s lead expanded as the race reached the halfway point.

On lap 18 the complexion of the race changed as Roddy Watts slowed in turn four for another yellow. Under the caution period, Inman went pit-side to change the right rear Hoosier after getting a flat. He ran over debris on the speedway.

Garrison Krentz now lined up next to Gill for the green flag. He gave Gill a run and secured the lead on the restart. Krentz just led the way at the line on lap 24 before Gill muscled his way back by on lap 25 to regain the top spot.

Gill pulled away from there as the battle for second heated up between Robert Bublak and Krentz. Bublak got the better of him in the final few laps to secure second.

At the checkered it was Gill with the win while Bublak was able to get around Krentz for second. Bublak got shuffled back early before regrouping and driving his way back up to second for his best career finish at The Dirt Track.

“It was survival of the fittest,” stated Bublak. “On the restart the guy drove us up the race track into the marbles and we lost a couple spots. I wasn’t going to give up. We are out here with a brand-new race car. I have to thank the DKM guys. This is the first full feature on it, so I’m happy with a second place.”

Krentz, a Ransomville Speedway regular, finished in the third spot in his first ever appearance at the World Short Track Championship. He admitted he raced Gill hard for the victory.

“I did get out front,” commented Krentz. “I pinched him down on the start and got it. I tried to stick on the bottom and he gave it back to me. That’s racing. I probably would have done the same thing. We are happy to be in third. This is our first time here, so I can’t complain.”

Kevin Ridley had at least one thing to smile about at the conclusion of the World Short Track Championship for the DIRTcar Sportsman. Ridley dominated the 15-lap invitational taking home the $500 win. It was a much-needed victory for the Waterloo, N.Y., driver after he did extensive damage to his car in the main-event.

“The way our week’s gone I guess this is the best way to end it,” mentioned Ridley after the win. “It has been a disappointment up to this point.”