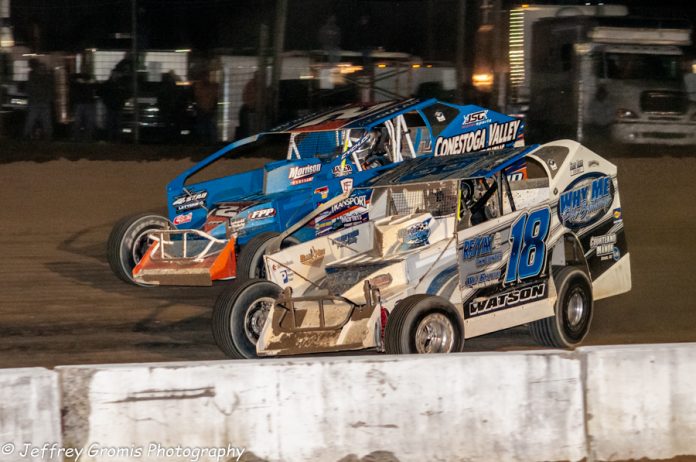 Milford, Del.’s Watson survived the war of attrition in the 40-lap Velocita-USA presented Design for Vision/Sunglass Central South Region finale for the STSS. Watson took home the $5,000 Mid-Atlantic Championship victory, and after posting the $100 Stockley Materials “Gambler’s Fee” at the beginning of the night, added $2,000 to his winning total.

After a back-and-forth night for Watson, he took advantage of the misfortune of multiple drivers in front of him to take starter Joe Kriss’ Sunoco checkered flags. Watson earned a total of $7,400 including Taylor & Messick lap money for his efforts in the Brent Hall No. 18.

Watson had previously won the STSS-sanctioned ‘Blast at the Beach’ at Georgetown Speedway in 2015.

Von Dohren jumped out the lead in his Dick Biever-owned No. 14s, while Gular struggled in the early going. Phoenix, N.Y.’s Larry Wight quickly slipped by Gular to take the runner up spot on lap six.

After a couple of yellow flags, Sprakers, N.Y.’s Stewart Friesen was the man to watch, going from his seventh starting position into the top-three behind Von Dohren and Wight before a lap-14 yellow.

On the ensuing restart, Friday night’s small-block winner, Billy Pauch Jr., went from sixth to third with a bold move, before relinquishing the third running spot back to Friesen.

At the lap 20, halfway point, the race flipped upside down in the blink of an eye. Billy Pauch Jr.’s, Rick Holsten No. 96 motor went up in smoke, ending his night.

After a couple attempts the restart, the last one would change the race. Larry Wight and Craig Von Dohren made slight contact, causing both cars to have terminal rear end damage.

At the blink of an eye, Friesen had inherited the lead, and Watson pulled up alongside. Friesen chose the inside lane on the next restart, and Watson took advantage.

Watson would take the lead and began to pull away until the leaders caught lap traffic. Friesen reeled in Watson and made the pass with six laps to go.

It appeared Friesen was on his way to his second Georgetown win of 2019, but coming to the two-to-go sign, Friesen came up lame, a result of running out of fuel.

Watson would lead the final two laps and defend the home turf. “I grew up in the grandstands here and at Delmar… this one means a lot to us,” and elated Watson said in Victory Lane.

Savannah, N.Y.’s “Super Man” Matt Sheppard needed only to take the green to secure the south region STSS title. After qualifying through the consi, Sheppard would bring his Hurlock Auto & Speed No. 9s home in seventh and $57,500 richer, winning the Insinger Performance Grand Championship consisting of the STSS North and South Region along with the American Racer Cup.

Despite an ill-handling racecar, Mike Gular brought the Terry Fasnacht No. 2A to a runner up finish. Hellertown, Pa.’s Rick Laubach came to life in the late stages of the race, bringing the Ryan Kerr-owned No. 1K home third. Montgomery, N.J.’s Brandon Grosso used the outside to go from sixth to fourth on the last lap and grab a fourth-place finish. Bechtelsville, Pa.’s Jeff Strunk had another quiet night that resulted in a solid fifth-place finish.

Ross Robinson won his first Sunoco Super Late Model feature of 2019 at the Georgetown Speedway, in the 40-lap event.

Robinson, of Georgetown, Del., started in the second row, and Rick Eckert and Donald Lingo led the field to green. Lingo quickly shot from the outside, to the lead and set sail.

Robinson pressured Eckert for the second spot until a lap 11 caution came out. Under yellow, Eckert pulled to the pits and would not return, allowing Robinson to inherit the runner up spot.

On the following restart, Lingo chose the outside. Robinson got a great jump and threw a slider on Lingo into turn one. Lingo and Robinson made contact, causing Lingo to roll to a stop before heading pit side.

Robinson would battle with a hard charging Mark Pettyjohn for several laps until they caught a now lap car, Donald Lingo.

Lingo and Robinson would again make contact on lap 20. Robinson went over the bank in turn two and continued forward motion. Lingo was parked for the night.

After the yellow, Robinson was dominant and relatively unchallenged for the top spot.

Mark Pettyjohn’s good run would be cut short on lap 31, as he pulled to the infield under green.

Millsboro, Del.’s Amanda Whaley would come home in the runner up position. After falling back to eighth in the early going, the “Wild Child” battled back to a second-place finish.

Scott Hitchens of Dagsboro, Del., won his 20th career Chesapeake Paving/J.W. Brown Trucking Crate 602 Sportsman feature at the Georgetown Speedway. After battling for much of the first 10 laps with Brad Trice, Hitchens would ultimately make the pass and take the win worth $1,500.

Trice would hold on for a second-place run. Tim Buckwalter came all the way from his 21st starting position to come home third. Tom Sherby, a Georgetown winner this season, grabbed the fourth spot. Dylan Swinehart rounded out the top five in the Hitz Racing No. 32H.

The battle for the STSS 602 Crate Sportsman was thrilling all the way to the checkered. Jim Housworth and Joe Toth entered the night first and third in points, both would have their night cut short due to damage.

New Jersey’s Cole Stangle would cross the line in sixth and hold off Jimmy Johnson for the $1,500 STSS South Region title.

The Delaware Auto Exchange Mid-Atlantic Sprint Series (MASS) were at Georgetown for their lone appearance of 2019. Jeff Geiges led all 20 laps to grab his fourth win of the season. Andy Best climbed through the field for a runner up finish.

Tom Carberry had a solid showing, coming home in third. Ricky DiEva came fourth, good enough to secure the MASS Series Championship for 2019 in his rookie season. C.J. Faison, in just his fourth race of the season rounded out the top-five.

Sean Smith won a wild Little Lincoln feature for his first victory of 2019. The top five came to the line nose-to-tail in a thrilling ending. Smith made a last-lap pass to take the win. Danny Martin would hold on for second.

Matt White came home third, right behind the side-by-side battle for the win. Jordan Herbert and Todd Sammons rounded out the top-five.

The Delmarva Chargers were back for the second night on Mid-Atlantic Championship weekend. This time, it was Brandon Reifler going wire-to-wire to from the front row to grab the 12-lap victory. Ashley Merritt followed Friday night’s win with a runner up on Saturday night. Jarrett Chandler rounded out the top three.

The Southern Delaware Vintage Stock Car Club saw Andy Cassel grab his first win of the season. Cassel was able to unseat Freddie Brightbill and C.J. Schirmer, who had been the two dominant cars all season. Brightbill and Schirmer would round out the top three in the 18-car field.

The 2019 season has now concluded for both the STSS and Georgetown Speedway. Keep posted for news and updates regarding the 2020 season in the coming days and weeks.