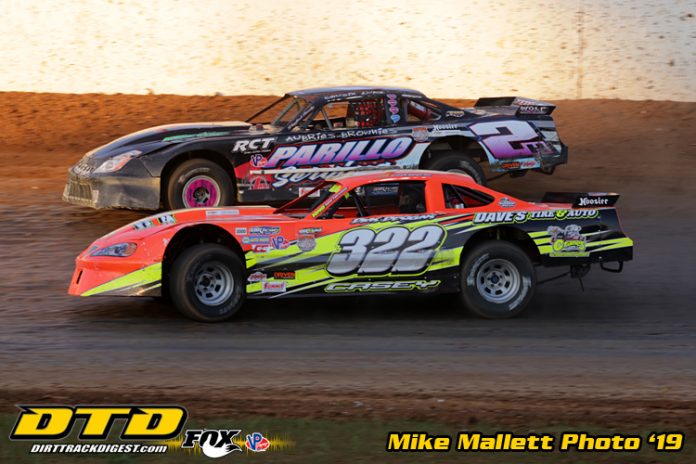 CONCORD, NC – One year ago Luke Horning was leading at The Dirt Track at Charlotte only to have a driveshaft failure cost him a shot at victory. This year, ‘Cousin Luke’ got his redemption.

The Gloversville, N.Y., driver led the entire 25-lap distance allowing him to pick-up an impressive $3,000 payday.

“That was a killer,” Horning said of last season’s disappointment. “We came down with a car that we didn’t think could be competitive. We didn’t expect to competitive, but we didn’t expect mechanical failure to cost us the race. To win is really good. To have a good chance at Oswego and mess up as a driver, this gives us a little more motivation going into winter after I cost us one.”

Horning lined up next to Rick Duzlak on the front row for the start. Horning used the middle groove to drive around Duzlak to grab the lead on the opening circuit.

Horning survived a couple of early restarts to keep his No. 2H at the front of the field. Each time he was flawless getting back up to speed.

Horning continued to race out in front as action behind him heated up.  Jay Casey eventually battled his way up to second from fifth.

On lap 12 a huge melee ensued in turn four collecting six cars. This break in the action pulled everyone up to Horning’s back bumper including Casey.

Horning did not get the best of restarts which allowed Casey to pull to the inside. Casey challenged, but didn’t have enough to complete the pass for the lead.

“I put a little more gear in the car knowing we were up front,” stated Horning. “I was just worried about getting to the lead and being okay. One time I caught the berm, got over it and kind pulled the front end over and I thought that the old man was going to give me a heart attack.”

Horning was never challenged from that point forward easily driving away to pick up the win.

Casey, of Canaan, Conn., finished in second. He admitted he had a shot at the win, but he wanted to make the pass for the top spot the right way. Unfortunately, he wasn’t able to get it done.

“I had quite a bit of car, but I didn’t know if was going to stick or not so I didn’t want to take us both out,” commented Casey. “I just laid back there. A couple times I had some good runs on him. I had him there for a minute. We touched and I fell back a little bit. That was it. This is a good finish. The car was great.”

Pete Stefanski came from 10th to finish in the third position. He had moved up to as high as second in the main-event, but restarts were not his friend. Stefanski was still pleased with his efforts on the night after struggling to get up to speed.

“We don’t shift on restarts,” commented Stefanski. “Those guys were. So, it made it harder for us on the restarts. That’s why we are going to change transmissions next year and go to a Bert. That way everyone is on the same playing field with that. We had a good car, started in the back, got to the front, contended for the lead and that’s all you can ask for after how bad we were earlier in the day.”

Joceyln Roy crossed the line in fourth with Kenny Martin driving his way to a fifth-place finish.

The final race of the night was the DIRTcar Pro Stock Invitational. The 15-lap affair saw Scott Towslee battle Casey for much of the distance. The teenage driver from Vermont was up to the challenge taking home the victory to close out the 2019 edition of the World Short Track Championship.

“This is awesome,” cited Towslee. “We went out the first big event and we crashed.  It’s my dad’s birthday this is for him. It feels great to be here.”

Jay and Jason Casey completed the podium with Rick Duzlak and Marc Lalonde rounding out the rest of the top five.