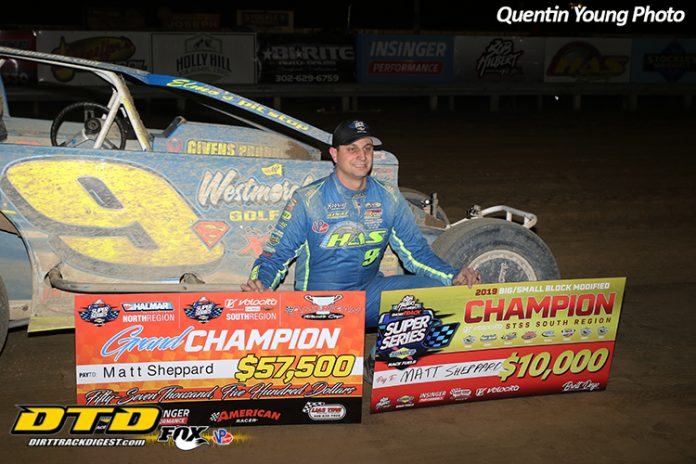 Back in October of 2017 when it was announced that Brett Deyo had teamed up with Sunoco Race Fuels through Insigner Performance, along with American Racer Tires to put up a hefty bonus if a driver could sweep both Short Track Super Series regions plus win the American Racer title the thought was the possibility of one driver winning all three and taking home over $57,000 was pretty slim.

Matt Sheppard set out to take the challenge in 2018 and succeeded in winning the American Racer Cup but came up short in the STSS finishing fifth in both regions. Sheppard was leading the South region late in the season but due to a scheduling conflict with the Super DIRTcar series he fell to the fifth spot in the final standings.

With no scheduling conflicts between the two-traveling series in 2019, Sheppard once again set out to see if he could accomplish the feat. Knowing that it would take a herculean effort to win all three titles the Matt Sheppard Motorsports No. 9S team worked out a plan with the HAS Automotive over the winter to see what needed to be done.

After winning the American Racer Cup championship back in September due to his outstanding season at Outlaw Speedway which produced 10 victories, step one had been accomplished.

Sheppard now had to find away to come away with both STSS region titles. The South Region was pretty much wrapped up after a second-place finish to Billy Pauch Jr., in the “Beach Blast” at Georgetown Speedway back on August 27th. With such a big lead, Sheppard only had to take the green flag in Saturday’s STSS Mid Atlantic Championship race to secure the title.

The STSS North Region was a different story as Sheppard had to battle hard with Stewart Friesen, Andy Bachetti and Mike Gular coming down the stretch. You knew Sheppard was serious about winning the North Region title and bonus when he decided to pass up the 358 DIRTcar Series race as part of Super DIRT Week and the $25,000 first place prize to head to the STSS Short Track Supernationals at Afton Motorsports Park. It proved to be the right move for Sheppard as he ended up taking the win to set himself up to win the North Region title at the Orange County Fair Speedway in the running of the “Hard Clay Finale.” Sheppard did what he had to do at OCFS finishing in the fourth spot to take the North series title. Step two accomplished.

Coming into this weekend’s STSS South region championship race and knowing he had to only start the feature event was comforting to Sheppard,but being the racer that he is, Sheppard wanted to go out and win the race to take the title in style. However, the weekend didn’t start out on a good note for the No. 9S team as the rear-end broke on the car Friday night while running away with his qualifying heat race forcing the team to make repairs for Saturday’s consolation race.

Sheppard easily won the consi putting him into the starting lineup and assuring himself of the title and the big bonus. Sheppard ended up with a seventh-place finish to win the title easily, but it certainly wasn’t the weekend Sheppard had hoped for.  In the end the team accomplished their goal of winning all three titles and the bonus. Step three accomplished, mission complete!

“We accomplished what we set out to do, obviously we had a much better car than what we showed tonight,” stated a disappointed Sheppard because of the way the night went, but still happy over what the end result of the night was. “We worked our way up all the way through, but unfortunately I had to pit to change helmets because I ran out of tear offs and couldn’t see where I was going. That’s what I stopped at the starters stand for, I told them it’s lap 20 and we’re out of tear offs already. Starting in the back was hard tonight with the track being like it was, but we did what we had to do and it all worked out.”

That is the racer in Sheppard coming out, he wasn’t going to be happy with just taking the green flag and winning the title. Sheppard wanted to win the race as well.  After taking a few minutes to clear his head of the night’s race, Sheppard reflected on what the team had accomplished and was proud of everyone involved that made it happen.

“I am proud of my team and of everything that happened,” explained Sheppard. “Winning the South deal, the North deal and the American Racer Cup, just so much goes into it. You get so many nights like tonight where you’re just dealt a bad hand or a bad track and to overcome that all year long, every night, night in, night out to win three different championships for a grand total of $57,500 is pretty amazing.”

Teaming up with the Hurlock Auto Supply group last season, Sheppard was very happy to win it for whole group down here in Delaware.

“I’m really excited we could do it down here, I mean this is where it started with these guys two years ago. They kind of got me into this deal and got my feet wet in this whole south series. It’s nice to do it in front of them.  They are all here today and it’s Alfred’s 50th birthday and he’s here with his family. All the HAS guys are here along with the Givens Produce guys who are also here tonight. It’s nice to be able to win the title in their backyard. I don’t think people realize how much stuff has to go right to put all three of these titles together. It takes a lot coordination between a lot of people along with a lot of miles traveled to do this.  To be able to win this whole deal is simply amazing.”

The goal of every racer is to win every race and title, but we all know that is just not attainable however, I asked Sheppard if he really thought that it was possible to win the STSS triple crown and come away with the bonus.

“I mean, that’s your goal every year, but it’s a big feat to accomplish and it’s a big stretch to even get to the point where we’re at now.  It is amazing. Whether we can pull off the DIRT deal or not, it’s still been a helluva of an effort this year, that’s all I can say.”

Now that Sheppard has accomplished what he had set out to do on the STSS, it’s time to focus on the next task at hand. That being winning the Super DIRTcar series title for the eighth time and fifth in succession. Heading into this weekend’s World Finals at The Dirt Track at Charlotte, Sheppard leads Mat Williamson by a mere eight points. To win both STSS title plus the SDS title in one year is unprecedented and if Sheppard could pull that off it could be a feat that we may never see again in our lifetime.

“Next week at Charlotte is tight and will probably go right down to the wire,” cited Sheppard. “Everything comes out of my shop and gets towed with my trailer so we have to haul ass home tonight, unload this car and finish working on the Charlotte car so we can get it loaded back up and hit the road again. Listen, if we can pull off the DIRT deal too, God that would be unreal season. The DIRT championship combined with both STSS titles, both track championships, the American Cup and the Hoosier weekly deal. Man, that would be like the trifecta times two. We have our work cut out for us this coming week and it’s not going to be easy for sure. We’re just glad to have this done now so we can move onto the next endeavor.”

As always, I can be reached for questions or comments at dirtracefan25@hotmail.com or on Twitter @dirtracefan25