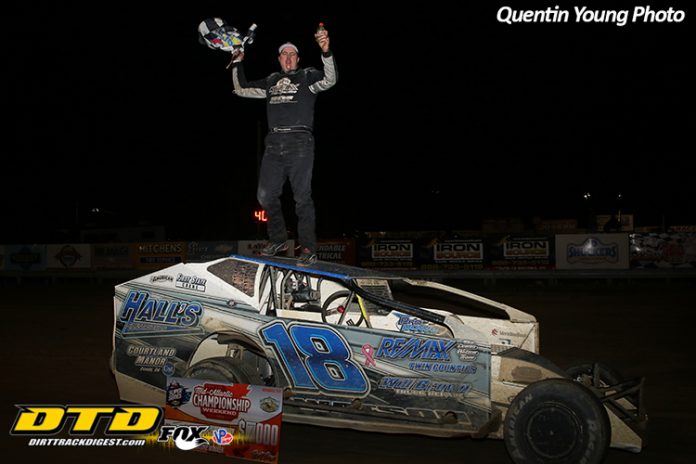 It was a matter of survival Saturday night during the running of the Short Track Super Series Mid-Atlantic Championship race at Georgetown Speedway and at the end of the 40-lap grind it was Delaware native Jordan Watson standing in victory lane defending his home turf.

Watson, who has had a great year with multiple wins at the Delaware International Speedway to go along with the birth of his first son, capped off the year by winning his biggest race of the season aboard the Hall Construction No. 18.

“This has been a long time coming and I have a lot to be thankful for,” said a still smiling Watson hanging out at his trailer after the race. “I won here back a few years ago at the Beach Blast, but then this series wasn’t full of touring guys like it is today. You look at the top ten in points today in this series and it is full of drivers who have won everywhere they race.  My goal was to be top five in points. I also really want to beat these guys and when they come to Delaware, I want to be the driver they look at to beat.”

The No. 18 was fast right from the time the team unloaded the car on Friday night as they dominated their heat putting Watson into the all important redraw. After the redraw, Watson found himself starting in the third position behind front row starters Craig Von Dohren and Mike Gular.

At the drop of the green, Watson hung there falling back a couple of spots, but never out of the top five. Running a steady race, Watson was just biding his time waiting for the race to come to him. That process started on lap 20 as the third place running Billy Pauch Jr., brought out the yellow flag stopping on the track with a blown motor. The caution again flew on lap 21 when second place running Larry Wight stopped on the track with rear-end issues and at the same time leader Von Dohren went pit side with an undisclosed problem ending his night.  This handed the lead over to NASCAR Truck Series driver Stewart Friesen with Watson now in second.

Friesen choose the inside line on the restart and when the race restarted it was Watson making the outside line work to take the lead from Friesen heading into turn one. Watson would extend his lead over Friesen, but with ten laps to go Friesen was starting to cut into Watson’s lead.  With lapped traffic now being part of the mix, Friesen right on the leader’s bumper as they completed lap 32.

Two laps later Friesen worked his way back underneath Watson to assume command and was now starting to pull away. But as they say, it’s never over until the checkered flag waves and as the field was coming around to take the two to go flags, Friesen slowed between turns three and four bringing out the caution and giving the lead back to Watson. Watson had no trouble on the restart holding off Gular to go on and record the big win and taking home the $7,000 first place prize.

“It was a tough race for sure, we sort of fell back a little there in the beginning when Larry (Wight) ran over me but it gave me some time to watch what lines the guys up front were running and every restart I could see the top was a little better,” explained Watson. “I couldn’t believe it that Craig (Von Dohren) broke, then Larry (Wight) broke and then we were right there again. When Friesen took the inside on the restart I knew if I could get a good restart that I might be able to get the edge going into (turn) one. We were able to get by him and get away a little, but then I started to have a little trouble there as we came up on the lapped cars and Stew was able to get back by me. I don’t know what happened to him there at the end, but we’ll take it for sure.

“I just have to thank all the people that make this possible, Halls Construction of course, along with Will Brown Truck Repair, Courtland Manor Nursing, Why Me Pole Buildings, Merdian Bank, First State Crane, Blue Hen Disposal, Re/Max Twin Counties, The Premo Team and many more that make this all possible for me. I also have to thank my wife, my crew, Bicknell Racing Products, Pro Power and Race Prep Integra Shocks. It takes a lot of hard work and even more money to make this all work out and I am lucky to have this opportunity.”