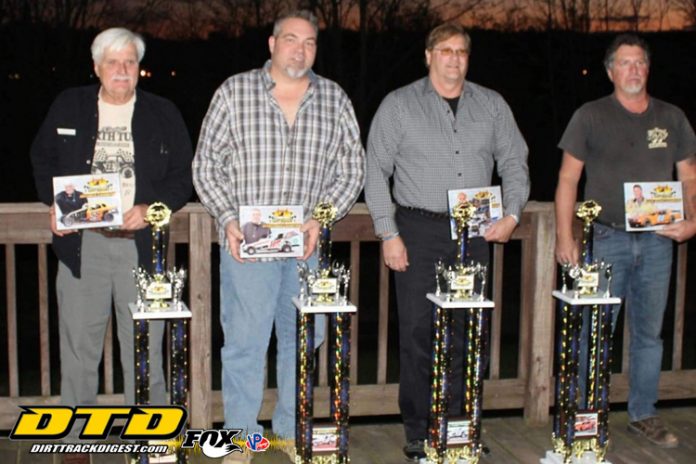 Our racing takes a turn this time of year and although many local teams are still on the road, we are starting our banquet tour and our first stop was at the Mohawk Valley Vintage Dirt Modifieds “Banquet Bash” at the Winner’s Circle in Fonda.

This organization has grown by leaps and bounds this past season and much has to do with their leader and constant promoter, Laurie Fallis.  Of course Laurie is very quick to tell everyone that she has many helpers and Saturday night was her time to thank all of them and the entire membership and sponsors for a fantastic year for the organization. The banquet alone grew from 35 attendees last year to 132 this year.  Before much began, Robert Palmer presented Laurie with a card and monetary gift showing the groups appreciation for all her hard work throughout the year.

First on the agenda for the event was Laurie’s address to the crowd with appreciation for a successful year and to go over a few rules for the 2020 season.  There were many giveaways throughout the evening and awards given to the members for their accomplishments of the season.  And all though the night the mission of the group was stressed; to preserve our racing history with good racing at each event and educate our new fans. After a great meal the night progressed with the MVVDM awards given for the 2019 season.  Special prizes were given to drivers that made all the point events.  Those receiving were John Constantino, Dan Wood, Merv Blackwell, John Flach, Stanley Wetmore, Frank Blanchard, Rob Sanford, Malcum Warner, George Palmer, Carl Cram and Alan McDonald.  There were monetary awards from sponsor, the Red Chair Guy,  apparel awards from Swagger Factory Apparel and several also received a set of tools. Laurie has even attracted the attention of a very young race fan, her grandson, Ryan has been helping her with several duties throughout the season and she presented him with a special award for his help.

Championship trophies went to Frank Blanchard in the Vintage Antique class with his No. 58. The Late Model Championship trophy went to local driver Malcum Warner of Middleburgh who runs the No. 44.  Malcum has racing in his blood, his father Matt raced in the early 1950s and was a veteran at many local tracks and in November of 1953 almost to the day, he also won a trophy for a clean sweep in the final feature race of the season at Sky High Speedway in Richmondville by winning his heat, then a semi-final event and the main event.  Vintage Sportsman Championship honors went to  Dan Wood in the No. 115 Tremont look alike Vintage Sportsman.  The Vintage Modified Trophy went to John Flach another veteran racer and Lebanon Valley champion who returned to racing through the MVVDM organization.  Flach and Stanley Wetmore also received a special painting of their cars from a dedicated fan that wants to remain anonymous.  The Promoter’s Award was given by Fallis to Tex and Denna Gorden for their perseverance throughout the season.  Laurie and MVVDM gave special recognition to NESCOT for their continued support of the organization. On our way to the banquet on Saturday we shot some photos of the Mohawk River’s invasion of Fonda Speedway and the good news is, after these shots were taken the river subsided and the Fonda Speedway track crew got right to work and in a short period of time things were looking up.

The action on the road was at Georgetown, Delaware and Georgetown Speedway.  The small blocks took center stage on Friday night with the win going to Billy PauchJr.,  Larry Wight, making a rare appearance at the track, was second and third to Stewart Friesen.   The final race for the big blocks in the Short Track Super Series Southern Region looked to be Stewart Friesen’s until two laps to go he ran out of fuel.  Jordan Watson of Milford, Delaware came home with the win, Mike Gular was second and Rick Laubach was third.  Matt Sheppard finished seventh and Friesen tenth.  Sheppard only had to take the green to take the $57,500 for winning the STSS North and South Region Championship, plus the American Racer Cup.

At the World Short Track Championship at the Dirt Track at Charlotte in NC, Fonda and Glen Ridge Pro Stock champion, Luke Horning won $3,000 in the 25 lap feature.  Following Horning to the line was Jay Casey, Pete Stefanski, Jocelyn Roy, and Kenny Martin.

We’ve been hearing rumors regarding Brett Hearn and next season, well the rumor mill has finally stopped and the news it out.  Brett has taken the position of handling motorsports operations for Chris Larsen at OCFS and will race only occasionally.