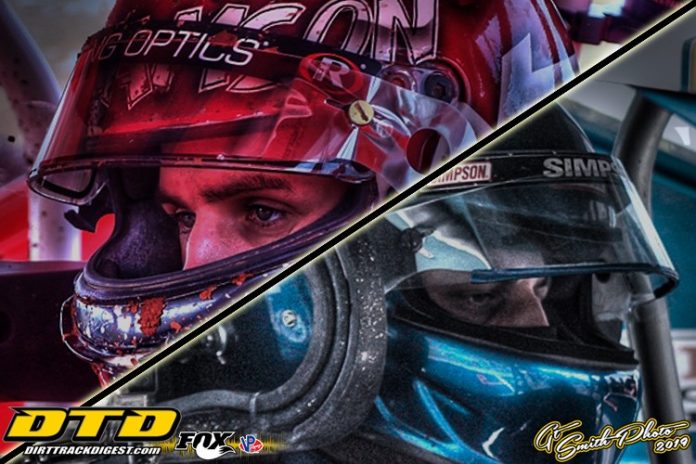 In what has shaped up to be the one of the best battles in recent history for the Super DIRTcar Series championship, Matt Sheppard and Mat Williamson head into the final two races of the season with a mere six points separating them for the 2019 title.  It will all be decided this Thursday, Friday and Saturday as part of the World Finals at The Dirt Track at Charlotte.

Both drivers have had historic seasons and they’ll both be looking to take home top honors when the dust finally settles on Saturday night in North Carolina.   The question remains, who comes out on top? Well here I’ll try to break it down and determine which driver leaves with the hardware and the championship.

The Tale of the Super DIRTcar Series

Sheppard: In looking back at the stats for the 2019 season with the Super DIRTcar Series, Sheppard has claimed victories in eight different series races.  He has 14 top five finishes and 16 top 10 finishes out of the 20 races that have been run.  That is good enough for 2,071 points on the year.  It’s been a great year for Sheppard on tour.  His one major hiccup came at Oswego which hurt him severely.  Prior to that, he had nearly a 100 point gap over the competition.

Williamson: Williamson doesn’t have the win totals of Sheppard, but he does have three with the Oswego win being the most important.  He scored wins one, two and three for the Buzz Chew Racing team.  Going along with his three wins he has 16 top five finishes and 18 top 10 finishes.  Both are greater than Sheppard’s total, but he just can’t match the win tally.  Sheppard broke at Oswego which has a higher point tally attached.  That put Williamson right back in the mix and even briefly gave him the lead.  Sheppard came back with a win at Brockville while Williamson finished third putting him at 2,065 total points.

Sheppard: Sheppard is a seven-time series champion.  This isn’t the first time he’s come to Charlotte with someone hot on his heels.  Back in 2017, Billy Decker came into the weekend attempting to make up a 37 point gap.  Sheppard promptly went out and stomped the field finishing first and second in the main-events to claim the title.  We’ll dive more into those numbers shortly.

Williamson: Williamson has never been in this position before.  This is his first real crack at a Super DIRTcar Series title and he’s been impressive.  At the start of the season I don’t think many would have given Williamson a shot with a new team at winning the championship.  Williamson has proven to be cool under pressure, but Sheppard has been there, done that.

Sheppard: Although he hasn’t won as much as he would have liked as of late, Sheppard comes into the weekend $58,000 richer thanks to claiming the Short Track Super Series titles and bonuses.  He also finished second in both legs of Eastern States Weekend.  It was a career best for him.  Sheppard captured the last event for the Super DIRTcar Series at the Brockville Ontario Speedway after starting 12th.  Brockville was a place he had never won at and he promptly remedied that situation.

Williamson: Williamson took home gold in two big races in 2019.  He was nicknamed ‘Mega Money Mat’ by the folks at the Orange County Fair Speedway after his triumph in August in the Centennial Weekend main-event where he picked up $100,000.  From there he went out and won his first ever Super DIRT Week title just over a month later to pocket another $50,000 payday.  To cap it off he scored $15,000 for the win in the small-block race at Eastern States.  Regardless of what happens, he’s had a good year.

Sheppard: In talking with Sheppard after his win at Brockville and his title efforts with the Short Track Super Series, the confidence is there.  He might not be winning like he wants, but circumstances just haven’t played into his favor.  He needs to find someone that can draw better than the sixth row for the start of a race.  That will be critical at Charlotte.  Even with that, Sheppard knows what he has to do and believes he can get it done.

Williamson:  The ‘Super Team’ as it has dubbed is the real deal.  Each of the teams included in the ‘Super Team’ moniker have won big money races.  They’ve worked together as one unit and it’s paid off.  They know how to work together and they have proven they can overcome adversity.  Williamson heads to Charlotte with the Buzz Chew team, the one he has three series wins with on the Super DIRTcar Series including the Billy Whittaker Cars 200.  There is nothing but confidence exuding from and this team.

Sheppard: Since the Super DIRTcar Series returned to The Dirt Track at Charlotte, Sheppard has run a total of 18 races.  He’s amassed 14 top five finishes out of 18 events.  Of those 14 top five finishes, he’s picked up three wins while being on the podium an impressive 12 times.  Sheppard’s average finish in Charlotte is an incredible 4.3 in those years.  Since 2015, Sheppard has finished no worse than fourth in a feature event with an average finish of second, that’s pretty impressive.

Williamson: Here is where things get dicey for Williamson. Williamson’s stats are much different than Sheppard’s.  He’s run at The Dirt Track at Charlotte 12 times in his career since 2010 with an average finish of 14.3.  To be fair, all those starts have come in his family owned car or while driving for other people on late season deals.  Of those 12 starts, he does have a win which came back in 2017, but only one other top 10 finish of ninth back in the finale last season.  He’s going to have to do better if he wants to take down Sheppard.  Luckily for him, the Buzz Chew team has previously shown speed in the No. 88.  That should help.

Overall you have to give the advantage to Sheppard, but it isn’t by much.  The only major discrepancy between the pair is when you get to the Charlotte stats.  By virtue of that, Sheppard has the upper-hand.

Regardless of what happens, it is going to be one hell of a battle between two of the best wheelmen of 2019.  Both are deserving and either one could walk away from the weekend with the championship.