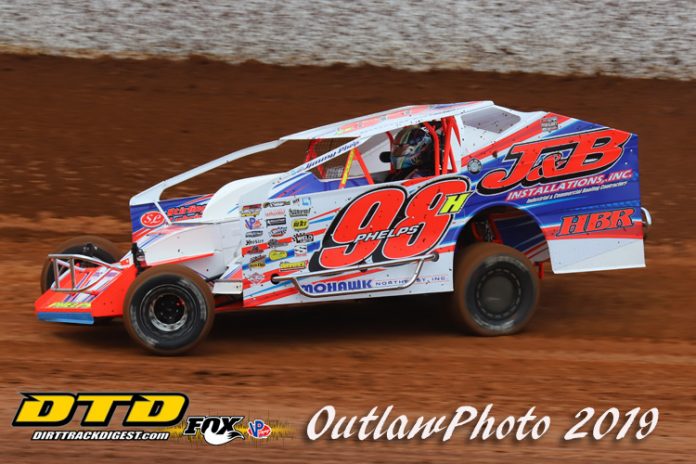 On Friday night, Jimmy Phelps took a new chassis to the win in Charlotte, leading the second half of a dramatic 40-lap Super DIRTcar Series feature event, a feature that saw wild twists and turns from the front of the field to the back.

Billy Decker jumped out to the lead at the start of the Super DIRTcar Series main, but the focus of the crowd quickly shifted further back, as points leader Matt Sheppard nearly went around in turn one and lost a bunch of positions. Sheppard took a couple hits in the process of the slide, and two laps later, Sheppard slowed with a flat right front tire and had to go to the rear of the large 38-car field. When Sheppard got out of shape, the ensuing stackup further back in the field saw title contender Mat Williamson take a hard hit in the left side door, but continue on.

On the restart, Billy Dunn took the lead from Decker, but could only hold the lead for one lap as Decker took it right back. Jimmy Phelps got to third from seventh, and Decker put some breathing room between himself and Dunn as the lap counter hit 10. However, with 38 cars, lapped traffic was coming fast, and Dunn closed in quickly once Decker hit the back of the field. Once all the frontrunners were in traffic, Decker stablizied the gap at about three quarters of a second, but three and four wide traffic was coming. On lap 16, Gary Lindberg had a left rear tire go down and slowed, but this was in the middle of a thick pack of cars, and right in front of the leaders. Decker got a piece of Lindberg, and Dunn got a piece of Decker, and while all continued on, Decker had his right side door caved in.

The damage didn’t phase Decker, as he pulled away on the restart. Three wide for second saw Gary Tomkins get third from Phelps, with Tomkins then pressuring Dunn for the runner up spot. Dunn and Tomkins hit hard battling for the spot, which allowed Phelps to get by and take second. At halfway, Dunn slowed with a broken axle from the contact, and the yellow flag flew.

Decker got a good restart, pulling away from Phelps, but only for a moment. On lap 22, Decker had a left rear tire go down, possibly from the incident with Lindberg and Dunn. This handed the lead over to Phelps, with Ward lining up behind him for the ensuing restart. Meanwhile, Williamson had clawed from 15th up to seventh, with Sheppard still outside the top 20.

On this restart, the race began to calm down, as Phelps held a steady lead over Ward. A lap 28 restart saw Erick Rudolph and Larry Wight blast by Ward, putting him back to fourth, while Sheppard had made ground up to 14th. Phelps didn’t break his cruise control out front, as Rudolph stayed a steady second and a half back, then a ways further back to Wight. One final caution as a lapped car slowed on lap 33 allowed Rudolph one more shot at Phelps, but Phelps fired well once again, pulling away from Rudolph and company.

Mike Maresca put Williamson back to sixth on the restart, but Williamson was able to claw back by in the final laps. Title rival Sheppard continued to pick off cars, as he cracked the top ten with two laps left. However, nobody could challenge Jimmy Phelps, as he scored his first Super DIRTcar Series win of the season at Charlotte. Erick Rudolph grabbed second, with Larry Wight, Pat Ward, and Mat Williamson completing the top five. With a tenth place finish, Sheppard trails Williamson by 18 points entering tomorrow’s Super DIRTcar Series finale.

The win comes in Phelps’ second start with his new Bicknell chassis. Prior to this, Phelps had only won three events this year, a feature at Brewerton in May, his Triple 25 in the small block at Oswego, and his Triple 30 in the big block at Oswego.

“I knew we had a good car, but I didn’t know how good Erick or anyone was,” Phelps said. “The car was super easy to drive, these guys busted their butts putting this new Bicknell together, its only got one race on it before this. This one is for them, they put a ton of effort into this piece and it was rock solid, basically perfect.”

Rudolph had a good rebound in the form of a runner up finish. Rudolph’s last Super DIRTcar Series start saw him barrel roll off the top of turn one at Brockville.

“We were pretty good, we’ve been finishing second a lot recently,” noted Rudolph. “We were super hot during the summer but we’ve had some trouble lately, so we certainly can’t complain with good runs like this. I don’t know whether the cautions at the end helped or hurt us, while we were good, Phelps was really good.”

It has been well documented that Larry Wight is faithful to the torsion bar rear suspension that was commonplace up until this season. However, Wight made the jump after qualifying last night, and came away with a third place finish.

“We changed from torsion bars to coils this morning, and did a half-ass scale job in the parking lot,” said Wight. “Pat Ward and I were the last guys still on torsion bars, but we really needed coils. If the the track is like this tomorrow, I think I know what we need to be really good, we were just too loose and too much on the right rear tonight.”