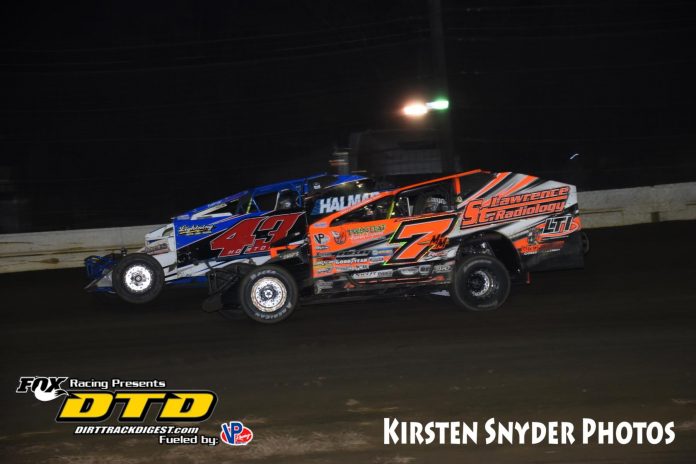 After a quick visit on his cell phone Saturday night at the Dirt Track at Charlotte where Mike Maresca was racing, the decision was made to head to Bridgeport Speedway on Sunday to take part in the track’s five-eight’s finale. Originally, Maresca thought the Bridgeport finale was on Saturday night but as he was checking the race monitor app on his phone he saw that the race on Saturday night was for the small-blocks. Quickly switching modes on his phone, the driver out of Potsdam, N.Y., went to the Bridgeport Speedway website and saw that the finale was on Sunday.

Coming out of Charlotte on Saturday night with a strong third-place finish and the car in good shape, the No. 7mm team made the decision to head to the “Port” to race on Sunday. Leaving Charlotte after the completion of the night’s action, the team drove straight through and arrived at South Jersey oval around 5 a.m. on Sunday morning. After a quick siesta, the team unloaded and started working on preparing the car for racing at Bridgeport.

“Really, after seeing the race was on Sunday instead of Saturday it was a no brainer,”  explained Maresca about the team’s decision to make the long trek from Charlotte, N.C., to Swedesbore, N.J. “I said as long as we finished Saturday night in one piece why not go? It probably hasn’t hit me yet since I am a younger guy, but I know this place (Bridgeport) has a lot of history and anytime you get a last time to anything is pretty cool.”

Maresca knew he had a good car underneath him and the only thing the team had to do was purchase a set of American Racer tires and they would be good to go. After a good run in his heat race that put him into the redraw, Maresca had the misfortune of redrawing 13th for the feature putting him behind a lot of the big-name drivers in attendance. However, Maresca wasn’t deterred one bit and drove a masterful race coming up through the field to end the night with a very strong third-place finish and ahead of the track’s kingpins, Billy Pauch Sr., and Ryan Watt.

“It was a good run for us, obviously switching over to race on the American Racer tires is a big difference but I feel like I adapted pretty well,” stated a tired but happy Maresca greeting fans behind the stands after the race. “I think we did pretty well with the track as fast as it was which made passing a little tough, but we were able to make the right moves at the right times to finish in third at the last race on this track which is pretty darn cool.

“This car has been really good since we brought it out.  I think if tonight’s race would’ve 10 or 15 laps longer, we might’ve had a chance to race for the win. We went hard on the right front tire and that kind of helped me a little bit making some passes during the green flag runs and I was able to get some good restarts along the way. This car was right on tonight and I am pretty happy with it so far. Maybe we’ll race one more time next weekend, so we’ll see what happens.”

Adding Sunday’s racing at Bridgeport to the already long week the team had put in at Charlotte made for a tired driver and crew, but Maresca was glad he decided to make the stop on their way home and was looking forward to returning next year already when the Doug Rose era begins at Bridgeport.

“It’s a pleasure to come and race here at Bridgeport and it’s pretty cool to see all the race fans here,” cited Maresca. “We’ve had a lot of people come over to thank us for coming today and that is pretty cool to hear, and it makes you want to come back. Our plan is to come back for the opener on the new track so I can say I was at the last one on the old track and at the first one on the new track. Maybe that way I’ll have something to tell my kids someday.”

I had a chance to walk around the pits on Sunday and talk to a few drivers regarding their thoughts on the going away of the five-eight’s mile track and what the future looks like.

The question I asked each driver was “What are your thoughts on the last race on the five-eight’s track and on the track going forward?” Below are their responses.

Jimmy Horton (career win leader at Bridgeport) – “Not sure really, I’m just hoping he’s (Doug Rose) not making a mistake. People bitched about it being too big, being too fast so now they’re getting what they want and now they’re bitching that they don’t want it. It’s not too big or too fast, everyone goes to Charlotte and goes fast. Everyone goes to Eldora and goes fast and loves it. Then they come here and say it’s too fast. There’s more ways to make it racier than tearing it down, but I wish him all the luck in the world, and I hope he makes it a good racetrack. I’ll be here no matter what, so we’ll wait and see.”

Wade Hendrickson (60 BB wins) – “We’ll do the best we can tonight and would like to go out on top for sure. I have mixed emotions; I hate to see the big track go but I can see the fire in Doug Rose’s eyes and I think he’ll do good things for Bridgeport. I know the car counts are down, but the car counts are down everywhere.  I understand what he’s trying to do, but I still worry where he can draw the cars from. The Modified division has out dollared ourselves is what happened.”

Richie Pratt Jr. (25 BB wins) – “I am glad the place is still going to be alive and that’s the positive. I’m going to miss the five-eighths, but the way the cars are nowadays I think it might be better to try a different size track and I think it will be better for everybody. I am not sure the car counts will improve, but I think the racing will improve and if the racing improves, the car counts might improve as well.”

Eric Kormann (3-time Sportsman Champion) – “It’s a sad day around here for a lot of people. This place means a lot to people. A lot of people grew up here. I understand it’s for the better and I wish Doug (Rose) all the best, but I still don’t have to like it. But either way I’ll still be here to support the track. In the end it’s still Bridgeport Speedway and I’ll be here to support it and race here. It’s just bittersweet for me.”

Billy Pauch Sr. (68 BB wins) – “I don’t know, it will be something different. I think it will be easier on motors and on the cars with the smaller track. I’ll miss the big track, but whatever. It ain’t my racetrack and I’ll be here to race no matter what size the track is.”

Ryan Watt (37 BB wins) – “I’m disappointed the track is going away, but at least the track is staying a racetrack and I am pretty excited to see what Doug (Rose) puts together here. It’s not going to be a track that’s just thrown together between two tracks. It’s going to be a track with walls and everything. I am kind of excited to see what he puts together here.”

Tommy Beamer (2 BB wins) – “It’s a little sad.  I’ve had a lot of fun racing here over the years, but I am glad there’s going to be something else here. I’m excited to see what Doug (Rose) builds. I believe in him; he has the experience and the resources and I believe we’re in good hands. At least somebody bought the place that’s going to keep it a racetrack so at the end of the day I can’t complain because I wasn’t going to buy it. I am really looking forward to next year and see what he has in store but still in all, it’s a little sad. Racing on the five-eighths was fun.  I’ll miss it and hopefully we can finish up tonight with a good run to end it on a high note.”

There were 27 cars on hand for the five-eight’s finale with heat race wins going to Billy Pauch Sr., Rick Laubach and Ryan Watt. Craig Von Dohren and Jeff Strunk were locked in to the redraw due to having posted the fastest times in Saturday night’s two big-block Modified practice sessions…

After winning the 358 feature on Saturday night, the motor in Ryan Watt’s No. 14W was protested. After checking the engine thoroughly, it proved to be legal adding an extra $750 to the team’s winnings…

All-time leader in feature wins at Bridgeport, Jimmy Horton’s night ended on a sour note after contact from the 19 of Travis Hill sent Horton hard into the first turn wall. Heavy damage was done to the Halmar Racing No, 43 ending his bid to win the last race on the five-eight’s track…

Although Jeff Strunk hung on for a second-place finish Saturday night, the night ended badly as the engine in the Keystone Racing No. 126 expired just after taking the checkered flag…

Craig Von Dohren, Wade Hendrickson, Matt Stangle and Dominick Buffalino all had what looked like to be top ten finishes end with what appeared to some sort of motor issues…