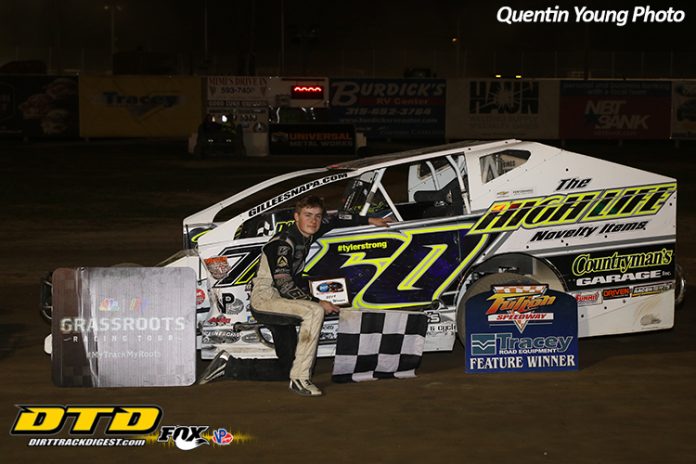 Two time Charlotte Sportsman winner and current Fulton Speedway Sportsman champ Jackson Gill has decided that it is time to take the next step in his racing journey.

Gill told Dirt Track Digest, “We have been running Sportsman since I was 12. We’ve now had two pretty successful learning years in this class and we’re just hoping we can progress through the dirt ranks of Modifieds with some of the best guys ever to do it. We currently have two Sportsman cars, both Troyer TD4 chassis and we plan to sell one and replace it with a new TD5 and continue to house two cars.”

Continuing he explained, “Right now we plan to run a full schedule of 358’s at Fulton on Saturday night. It looks like we might skip around on Friday between Mohawk, Can-Am and Brewerton as our schedule and budget will allow. We currently have no sponsor obligations to fulfill so our schedule may adjust depending on that if we get a sponsor who wants us at a certain track.”

The transition to 2020 simply won’t be the 358 division as Jackson said, “Brian Donath from Donath Motor Worx has supported us through our Sportsman years. We plan to have him build us a brand new 358 and hopefully we can piece together a second one as a spare. Our family still has a complete big-block on the floor and we may have Brian go through that and try to qualify for some big-block shows as our home tracks and possibly run a few times at the Brewerton Speedway.”

Jackson talked about sponsorship and what his program has been like the past few years.

He said, “We haven’t secured any sponsorship for 2020 yet, but we have a long time relationship and friendship with Beau Fleming from the High Life in Watertown. He has sponsored our program since I was five years old in box stock competition in go karts. He has always been a huge supporter of our team and has been the primary sponsor on the Sportsman the past four years.

“Billy Colton from Troyer Race Cars has done a tremendous amount for our team and really helped elevate our program the last two years. We plan to continue to grow with his help and support in the 358 class. Brian, at Donath Motor Worx, will continue to help us with our engine program and Stephane LaFrance from Trick Race Parts has been an integral part of our team as well. He takes care of our shocks and suspensions as well as our tire program. He has revolutionary tools to sipe and grind tires that really help us and he too will be part of our 358 program. The rest of our race team is funded and maintained by our family. My Uncle Bill and Aunt Heather own the coolest photo booth you’ve ever seen from SnapShots Photo Booths. They have a ‘77 VW bus and vintage camper available for weddings and special events. They stepped us this year and helped cover the high costs of the end of season races and certainly contributed to the good runs we were able to have.”

Jackson Gill has made had the spotlight upon himself numerous times in his brief career and noted, “I have been driving for 11 years and started racing at five when we traveled all over the state with the New York Dirt Kart Series and I was able to win the 2013 championship in the Purple Plate division. We moved into Novice Sportsman in 2015 at Can-Am and then the next year to the regular Sportsman and I actually won a feature that year at the age of 13.”

Continuing he said, “We won the 2019 Fulton Speedway Sportsman championship at the age of 16 and we were runner-up at Can-Am and have been top five the past two years in the Sportsman DIRTCar Series final points including a fourth this year.”

Jackson explained, “We really just want to be competitive. We understand how difficult the 358 class is. We’ve been involved in it for years and there are a lot of really good drives and really smart people. We just hope to be competitive and stay out of trouble.”